Many have probably heard about China Eastern Airlines Flight MU5735 that crashed near Wuzhou, China on March 21, 2022. Something caused the plane to enter a steep dive while the flight was straight and level at its cruising altitude and impact the ground minutes later. Airplane accidents are extremely rare events, and it is extremely rare for an accident to happen in this way. This post reports what is currently known about the accident and discusses possible causes.

China Eastern Airlines (MU) flight 5735 was scheduled to depart Kunming at 13:10 local time (05:10 UTC) and arrive in Guangzhou at 15:05 local time (07:05 UTC). (UTC refers to Universal Coordinated Time which was previously known as Greenwich Mean Time.) The flight was operated by a Boeing 737-800. This model is different than the 737MAX and is not equipped with the MCAS system that was determined to be the primary cause of two 737MAX crashes a couple of years ago.

The flight crew was very experienced. The captain had almost 7,000 flying hours, while the first officer had more than 31,000 hours of experience. A third pilot was on board as an observer and had 556 flying hours.

This information is illustrated below. 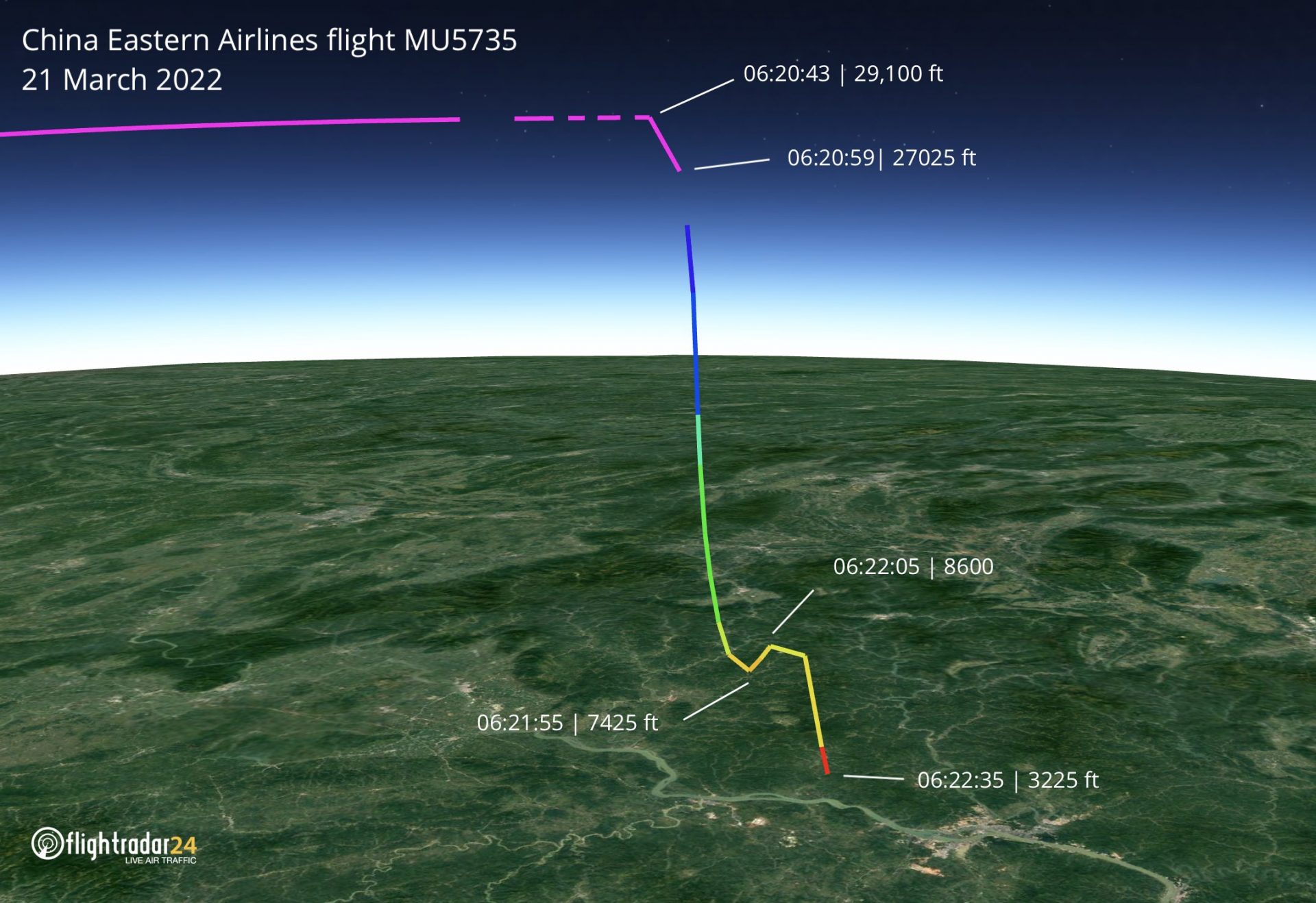 After a normal flight, MU5735 suddenly and rapidly descended and crashed within a span of about two minutes.

The cause is undetermined at this time. There are, however, clues about what may or may not have happened. I’m not an airline pilot. This analysis relies on knowledge of other airline accidents and my private pilot training and experience.

The airspeed (speed of the plane relative to the air through which it is moving) has not been publicly available although the airspeed can be presumed to have been relatively constant because of the constant groundspeed (the horizontal speed of an aircraft relative to the Earth’s surface). If airspeed was constant, that rules out loss of lift from an aerodynamic stall as the cause of the initial dive.

It is possible that the plane could have lost enough airspeed during the recovery from the initial dive at about 8500′ amsl and 5,000′ agl (above ground level) to enter a stall. Pulling the nose up to stop the initial rapid descent and establish a positive rate of climb would certainly reduce airspeed. A stall might explain the second rapid descent. If the aircraft stalled at an altitude only 5,000′ above the terrain, recovery would be more challenging but not impossible by any means.

Engine failure is an unlikely cause of the crash even in the unlikely event of a simultaneous double engine failure. From 29,000′ the pilots could have maintained a slight nose-down attitude and glided for a great distance. Engine failure would not explain the second dive either.

In extremely rare cases, planes have broken apart in midair for various reasons including metal fatigue. A strip of metal that may have come from the plane was found 10 km from the crash site. The final descent and impact was recorded on a security camera at a nearby industrial site. The plane appears to be intact.

A pilot intentionally crashing a plane has happened only a handful of times in the history of commercial aviation. The most recent known example is Germanwings Flight 9525 in 2015 where a pilot crashed an Airbus A320 into the French Alps. At this point, an intentional act by the pilots or someone else on board cannot be ruled out.

The possibility of sabotage of equipment or systems can’t be ruled out either at this point.

Status of the Investigation

Information from the flight data recorder (FDR) and cockpit voice recorder (CVR) will be crucial in determining what caused this crash. The CVR has been recovered. It has been taken to Beijing where it is being examined. The FDR should be found soon. The information from the FDR will shed light on any mechanical problems the aircraft experienced.

Chinese investigators have invited representatives from the U.S. National Transportation Safety Board (NTSB) to join the investigation because the plane was manufactured in the U.S. It may take them a couple of weeks to take part because of Chinese quarantine requirements.

Participation of the NTSB may alleviate concerns over transparency in the investigation. In a few instances, countries have gone to great lengths to avoid assigning any blame for crashes to their own pilots.

China Eastern is a decent airline although it has some customer service problems. I’ve flown on China Eastern 737-800s several times. I’d do so again without hesitation except I’m now reluctant to visit or transit through the People’s Republic for reason unrelated to aviation safety.

If there was an intentional act by anyone on board, that should be identified by the CVR rather quickly. Otherwise, identifying the cause may take quite some time. In either case, the release of an official accident report will take months.

Do you have thoughts or questions about MU5735? Don’t let this unfortunate incident deter your travel plans.

27 thoughts on “The Curious Case Of China Eastern Flight MU5735”