After the missed connection and unplanned overnight stay in Detroit, the flights to Nairobi, Kenya continued. My rebooked route began with this flight to Atlanta. The trip was notably uneventful except for disembarking in Atlanta. Passengers couldn’t get off the plane. I spotted the problem first but couldn’t tell the crew.

Restarting The Trip To Nairobi

See this post for a recap of the problems that led to rerouting the flights to Nairobi, Kenya. With the new routing I missed out on Air France’s newest business class seat but earned substantially more qualifying dollars for frequent flyer status and experienced several new airline products and interesting lounges. The revised trip began shortly after noon with a short 594-mile flight to Atlanta on a 737-900ER. The extended range of the ER version wasn’t called on for this trip.

(A couple of days ago, Delta’s CEO hinted that Delta was interested in placing a large order for Boeing’s 737MAX. That is a bit of a surprise because Delta likes to buy used aircraft. Furthermore, its only orders for new planes have gone to Airbus in recent years. It is astonishing to me that Delta is one of the few major international carriers that operates no Boeing 787s. If Delta buys 737MAX aircraft, it is probably because of deep discounts that Boeing has been making to stimulate sales for the beleaguered MAX.)

If legroom is a consideration, avoid all bulkhead seats on this plane. But if not, bulkhead seats could be a good choice because there aren’t any seats that can recline into your space.

Delta’s 737-900s have video screens with movies, audio and live satellite TV, streaming videos on wifi, and power at every seat.

My seat was 3A, a window seat on the port side. A light rain accompanied taxi, takeoff and initial climb.

The flight departed to the northeast on Runway 3 Left. Before climbing through the overcast, the folks on the flight deck brought us around to an southeasterly heading with a gentle 270° left turn. The initial course to Atlanta passed over south Detroit, the Detroit River and Windsor, Canada.

The Detroit River is weird but interesting.  It seems like a poor excuse for a river.  It is only 25 miles (45km) long.  The river is basically a natural canal that connects Lake St. Clair to the north and Lake Erie to the south.  This tiny river is important because it is a small but indispensable part of the 2,340 mile (3,700 km) long Great Lakes-St. Lawrence Seaway System that connects the Great Lakes to the Atlantic Ocean.  And The Detroit River is the border between the U.S. and Canada.

There was no predeparture beverage.  Flight time was just over one hour.  Because of turbulence, inflight service in first class was limited to the snack basket and a beverage service.  Economy customers had no service

It was a routine flight until we parked at Gate E9.

Immediately after the plane stopped passengers in aisle seats got up, retrieved their bags from the overhead bins and lined up in the aisle as usual.  While waiting to get up, I had a good view of the struggle the gate agents were having trying to move the passenger boarding bridge towards the airplane.  The bridge seemed to get stuck about 10 feet from the plane.  Something didn’t look right to me.

The reel that holds the large, orange tube that supplies air to the plane when the engines aren’t running was being pushed along by the undercarriage that moves the jet bridge.  The reel was twisting and turning as it was moved along.  At one point, the reel’s wheels appeared to stick in a grating.  The jet bridge wouldn’t move after that no matter what the gate agent did at the controls.

Through the window, I tried to signal the agents by pointing down but couldn’t get their attention.  The jammed aisle prevented me from approaching a crew member.  After a few minutes, the captain announced that there was an unknown problem with the jet bridge and the agents had called a mechanic.

Surprisingly, it only took about five minutes for the mechanic to drive up.  I couldn’t get his attention and he went up to talk with the agents at the controls of the jet bridge.  It was a few minutes more before the mechanic went down to the ramp for a visual inspection.  He saw the problem right away and secured the hose in the proper spot. 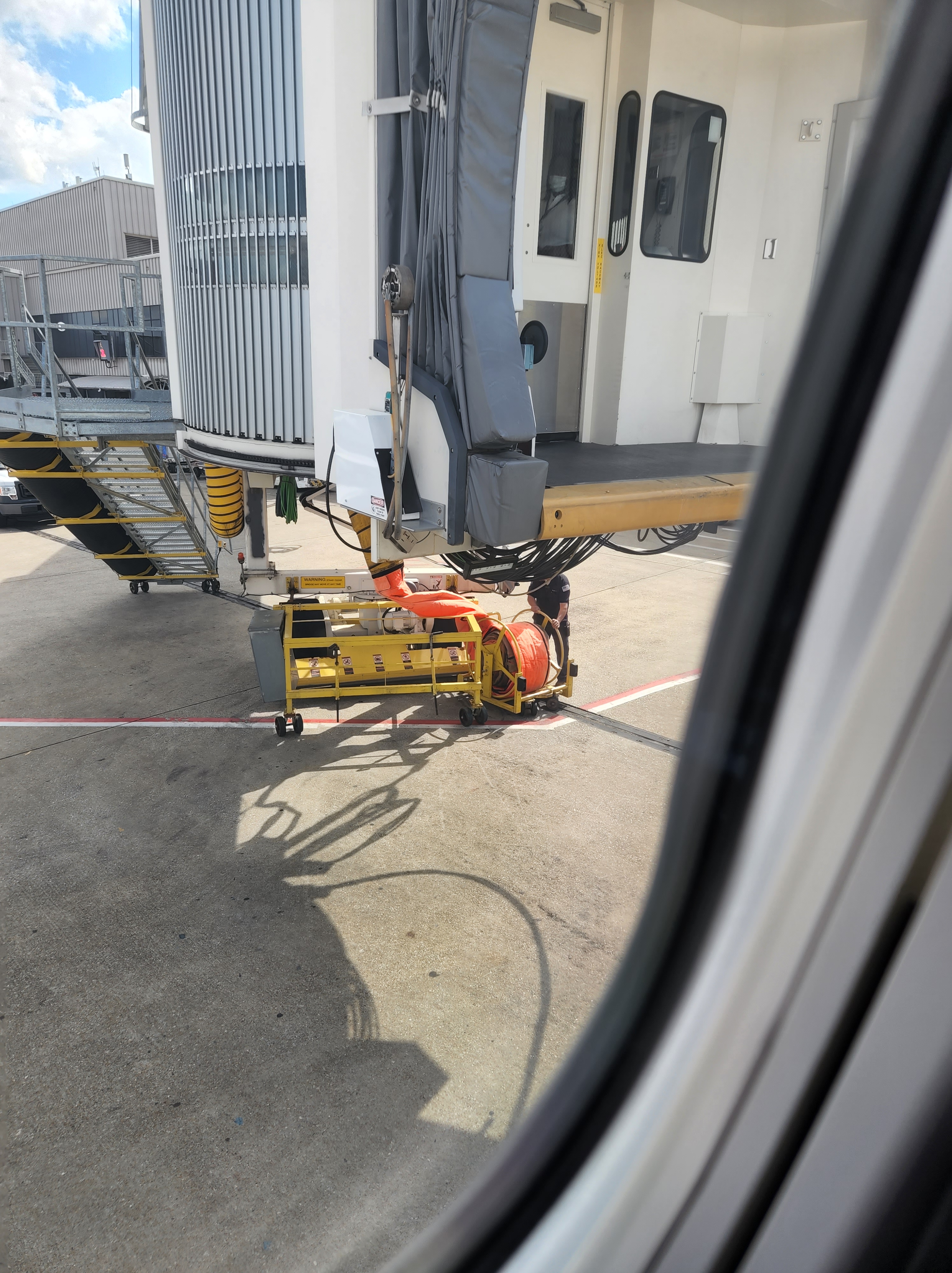 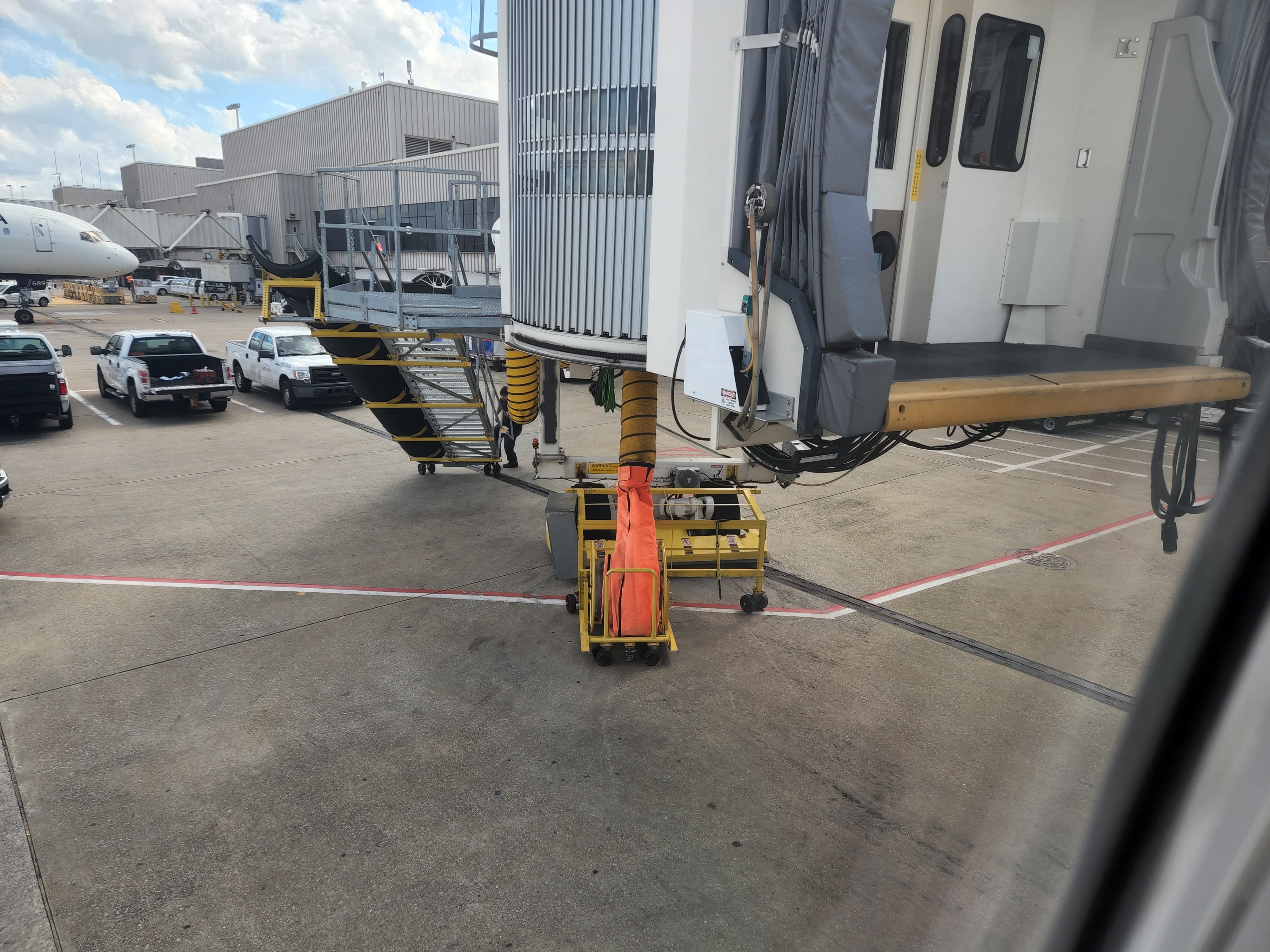 The delay lasted only about 15 minutes or so.  It was a little frustrating though to see the problem without being able to do anything.

This flight had very little in the way of service but departed and arrived on time.  After the events of the previous day, I appreciated that very much.  Having visited the restroom just before the descent to ATL and several hours before the next flight, I didn’t mind the delay in getting off the plane.

Yesterday, I described my routine when I miss a flight and need to rebook.  What do you usually do in that situation?