Ha ha! See what I did there? In late April 2022, I met four friends from college for a mini reunion in Las Vegas. It had been decades since the last time we had all gotten together. In spite of advancing age, we managed to have a pretty good time.

Surprisingly, the Fremont Street Experience (FSE) was one of more enjoyable parts of the trip. I say surprisingly because on previous trips to Sin City I’d always stayed on the Strip, which is the concentration of modern mega hotel/casinos and attractions near the airport. I’d never seen much need to make the effort to go downtown to see some old casinos.

The History of Fremont Street

Through the years, Fremont Street appealed to everyone from Frank Sinatra, Lola Falana, and Bugsy Siegel to couples and families watching distant atomic blasts from hotel pools. Looking to attract more visitors to Fremont Street, casinos began erecting the world’s flashiest neon signs, including the 90-foot-tall neon cowboy called Vegas Vic, along with double dice, martini glasses, and silver slippers. Today, some of Nevada’s most iconic retro neon can still be found along Fremont Street, thanks to careful preservation from the Neon Museum.

Historic Fremont Street has since gone through multiple revisions and upgrades over the years.  It was transformed into a pedestrian mall in 1966 and became the Fremont Street Experience in 2004.  Travel Nevada states:

Previously open to vehicles, this six-block stretch of famous roadway was converted into a pedestrian mall in 1996, officially transforming into the Fremont Street Experience. In 2004, a barrel vault canopy spanning four whole blocks was built over the Fremont Street Experience, which now features an astonishing 49 million LED lights shining so bright the canopy can operate video shows even in the daylight. The Viva Vision canopy is the largest video screen in the world, running hourly nighttime shows that pay homage to some of Nevada’s most well-known character traits, like Area 51, race car driving, patriotic displays, and more. When light and sound shows are not playing, music continuously plays on a 550,000-watt sound system that runs the entire length of the Fremont Street Experience.

Based on the evening we spent there, I’d describe FSE as people, lights, sound, alcohol, cannabis, and fun.  I hope these photos illustrate what I mean. 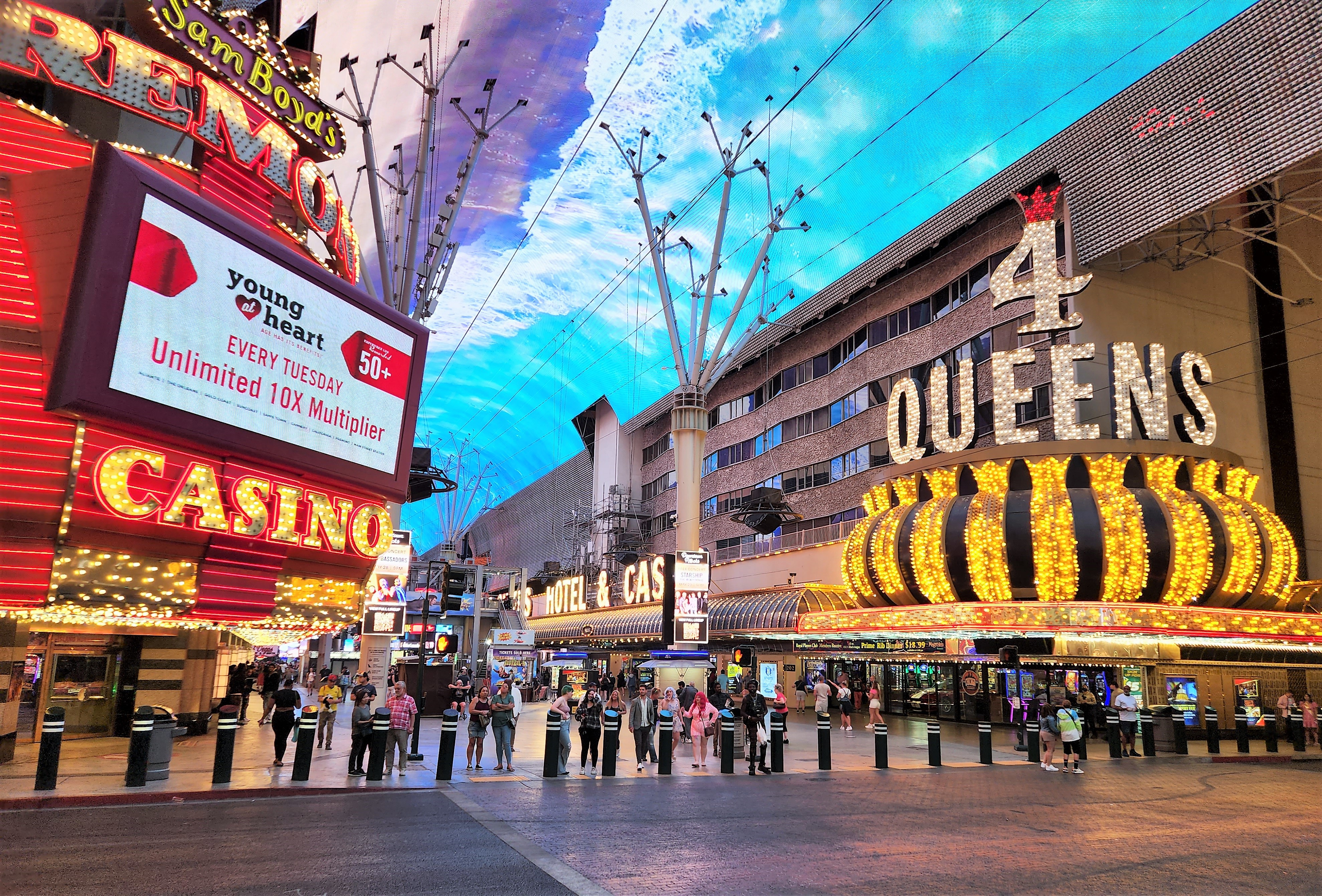 In the old days, the extravagant lights of the Fremont Street hotels and casinos gave this place the nickname “Glitter Gulch.”  FSE preserves much of that neon glitz.

The area may look familiar because it has been the setting for scenes in numerous movies, TV shows, and music videos.  The car chase scene in the Bond film Diamonds Are Forever (1971) is probably my favorite. 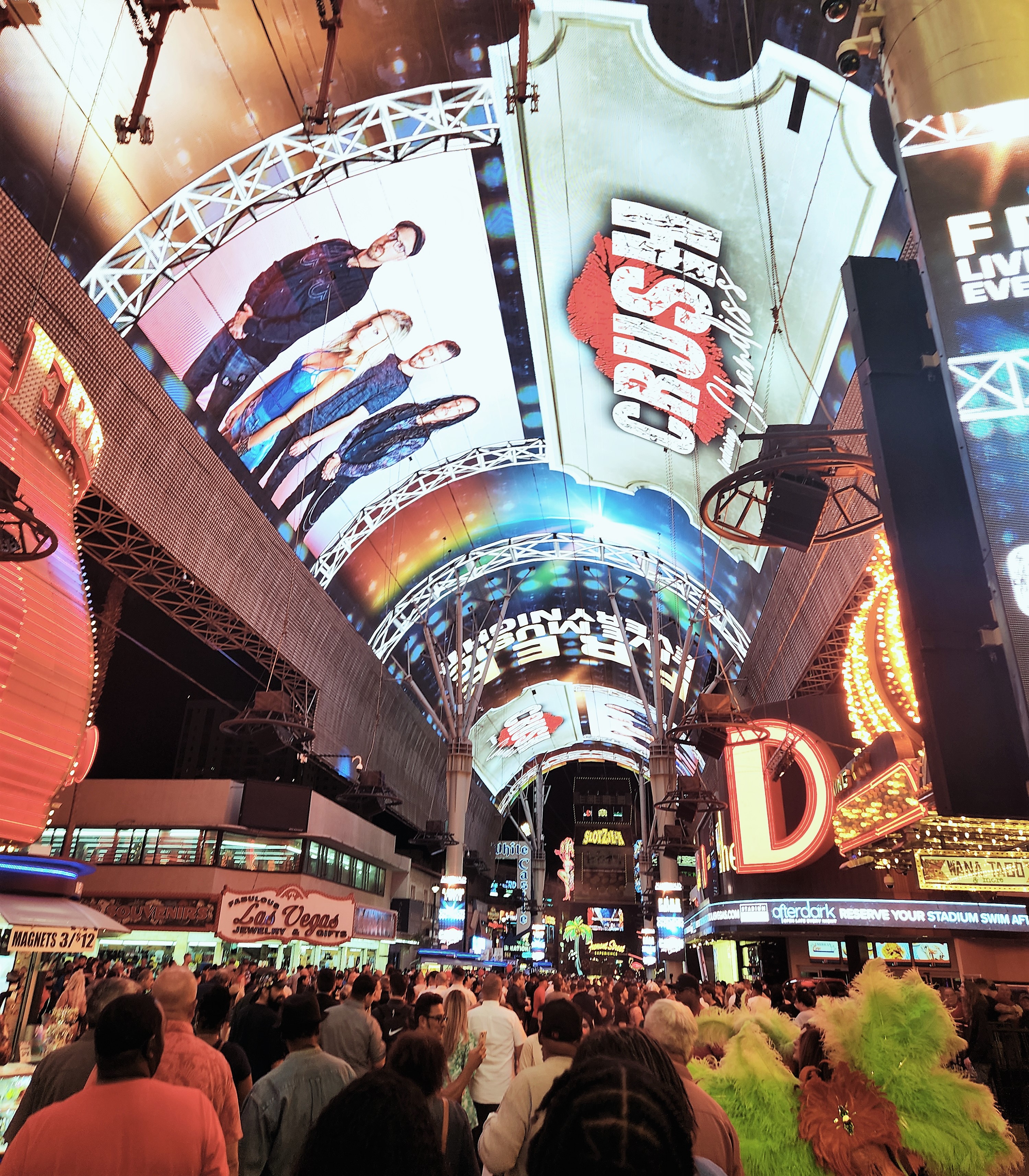 The Viva Vision canopy is the world’s largest video screen. An ever changing series of scenes, videos, and advertisements is displayed overhead.

Walking streets are a blast. FSE reminded me of Bangla Road in Phuket, Thailand pre Covid. 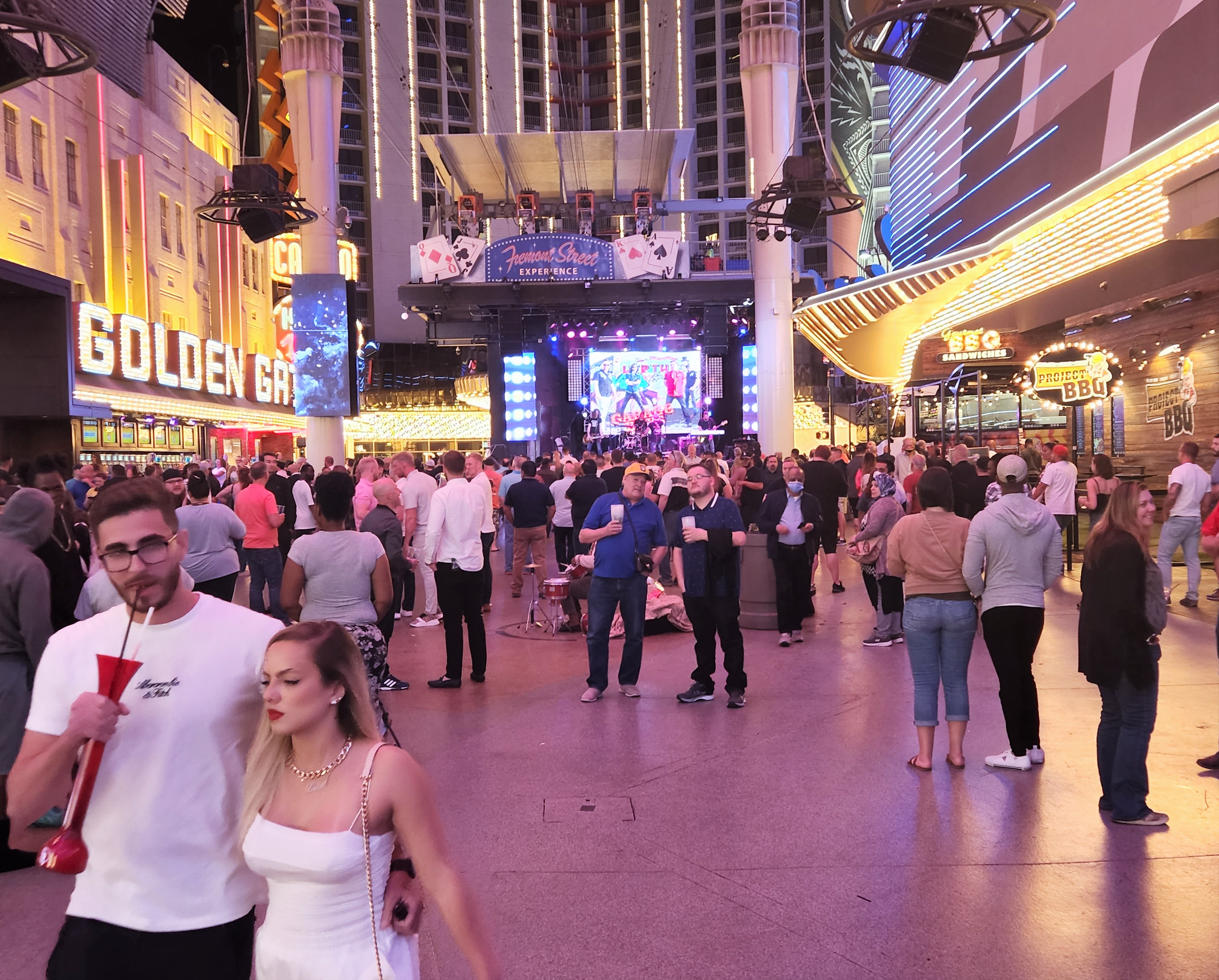 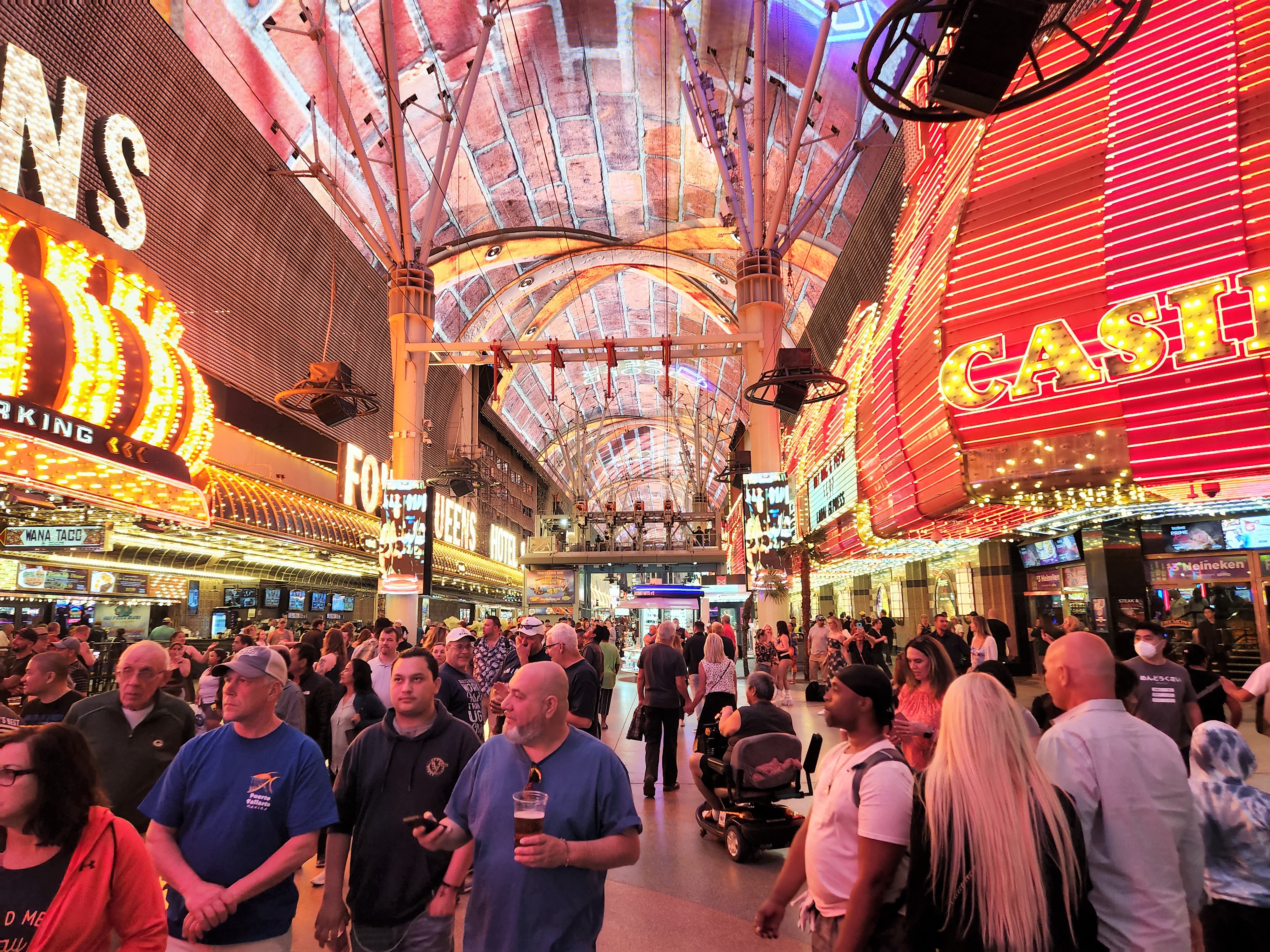 There are several open-air bars, and alcohol consumption outdoors is legal at FSE. FSE is a great place for people watching. Folks are feeling good and are in no hurry to go anywhere. It is easy to strike up conversations with strangers.

Three stages offer free concerts and other entertainment. Live entertainment is non stop with one or two stages busy at all times. 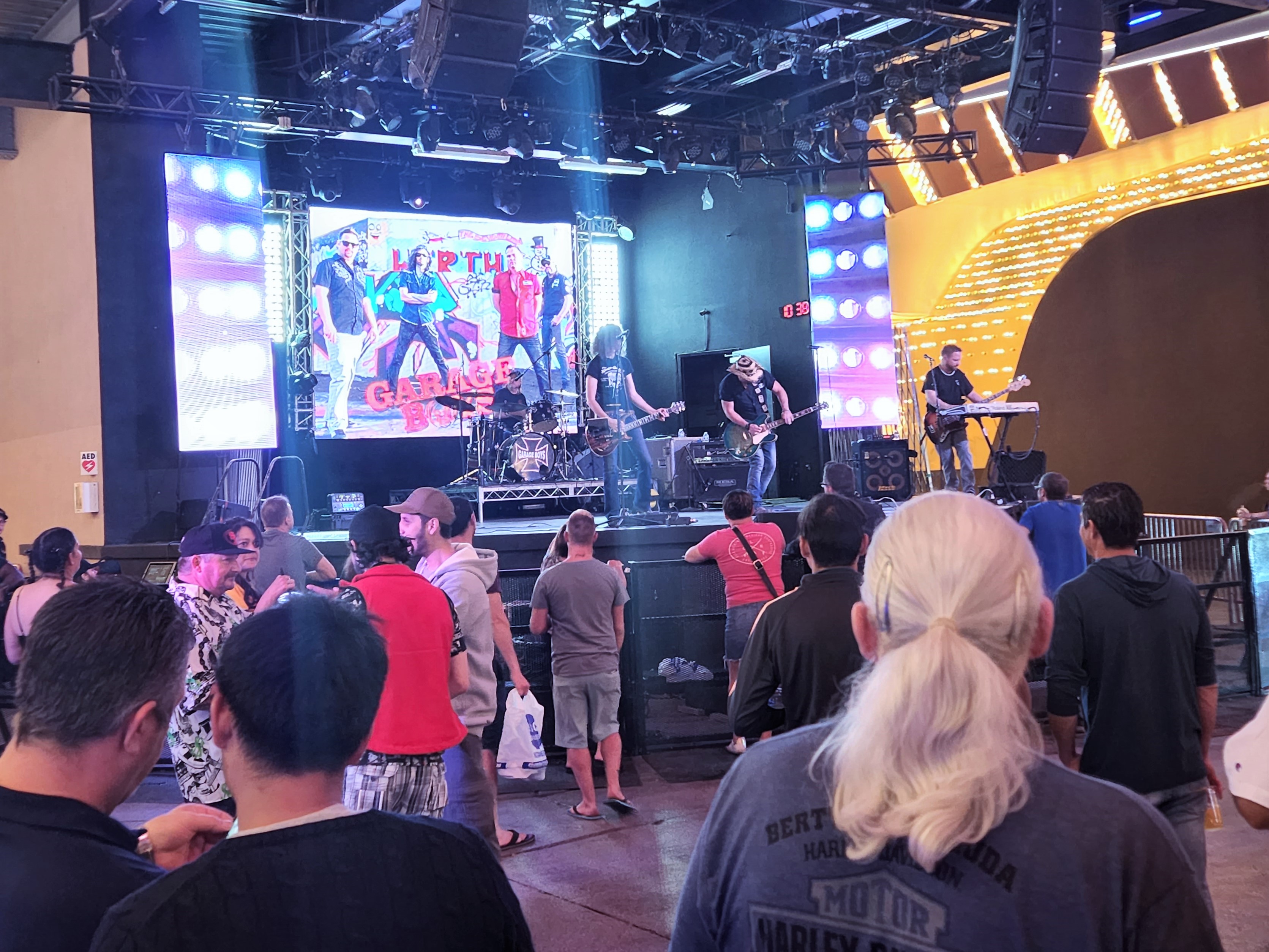 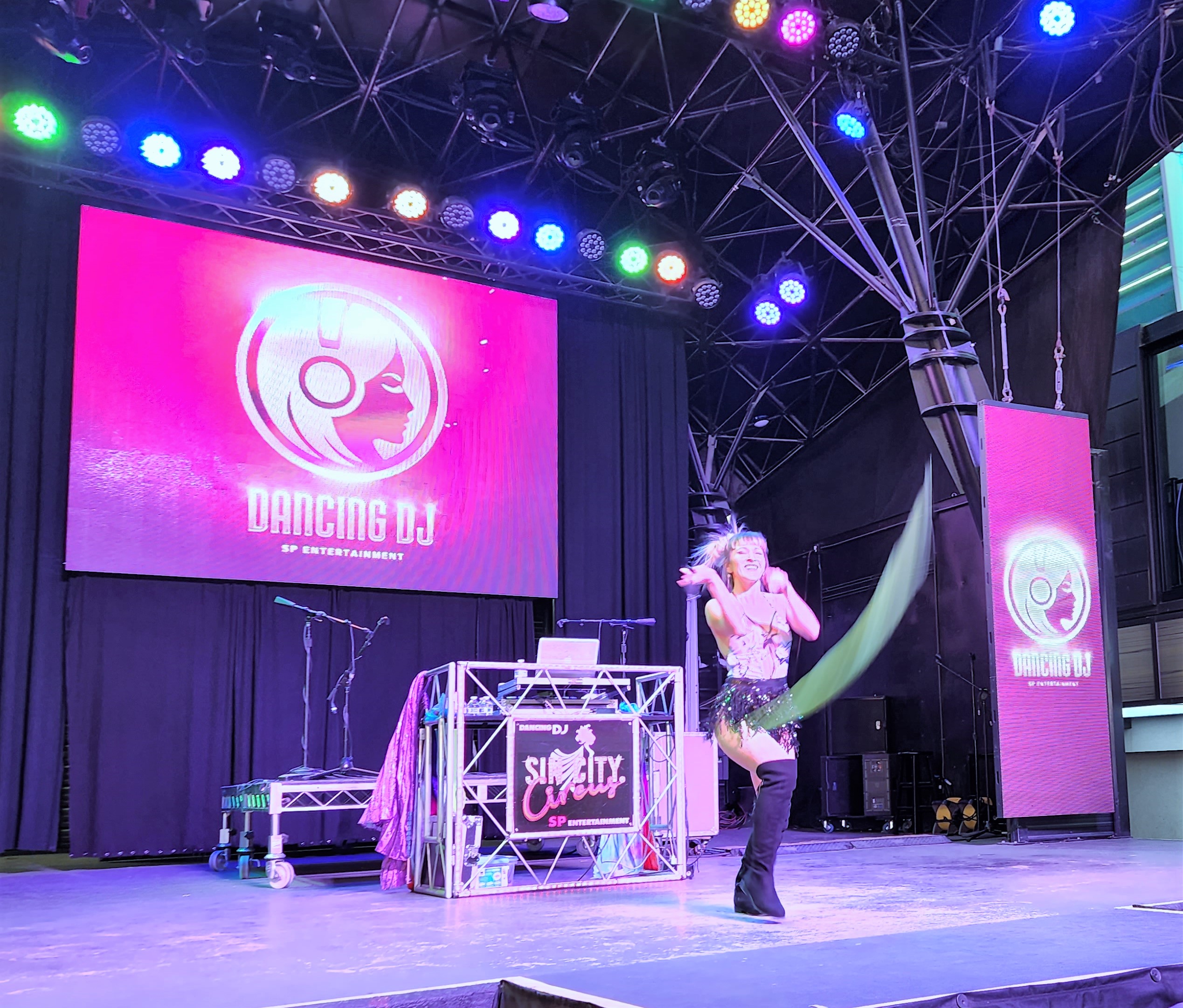 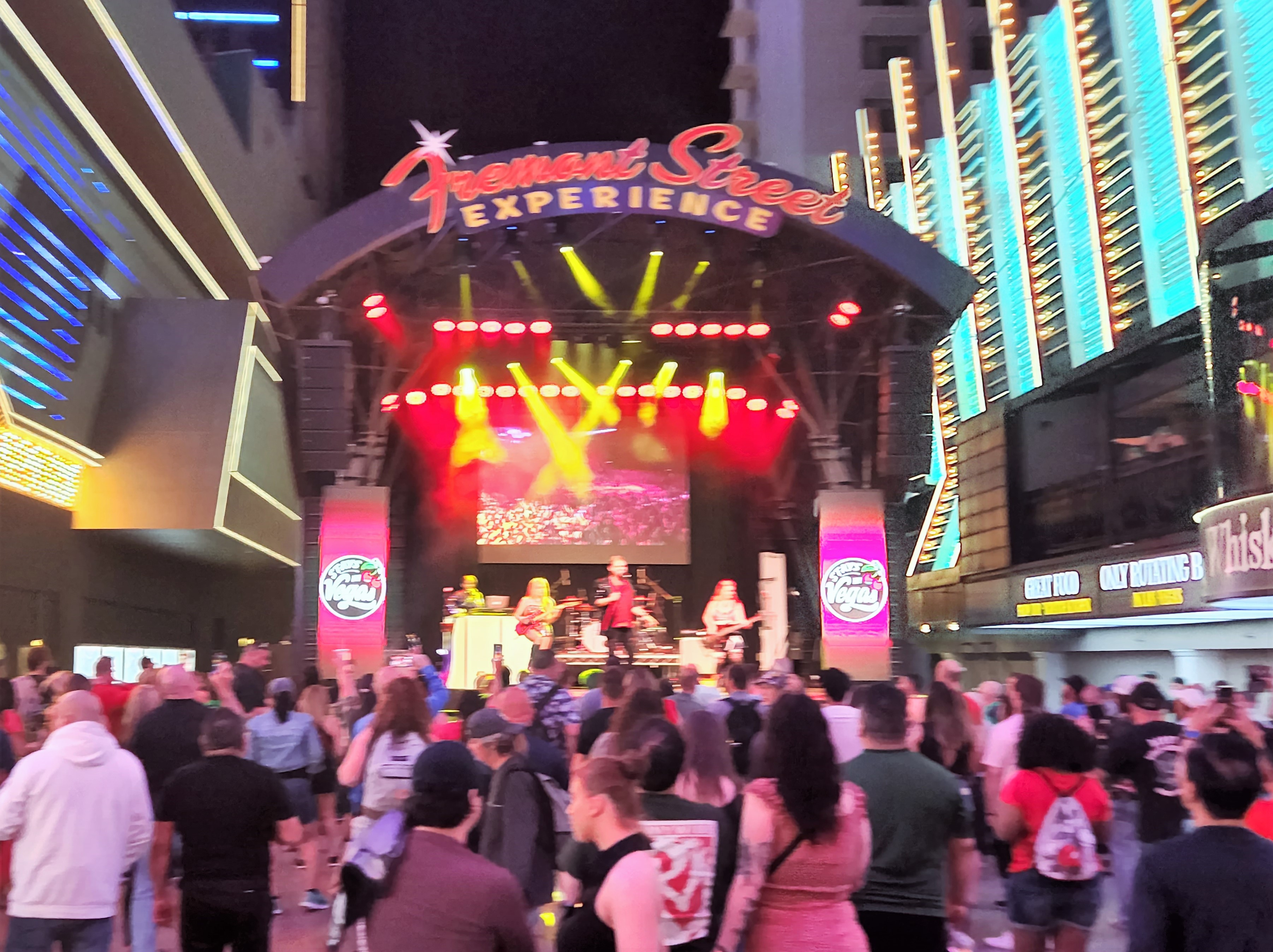 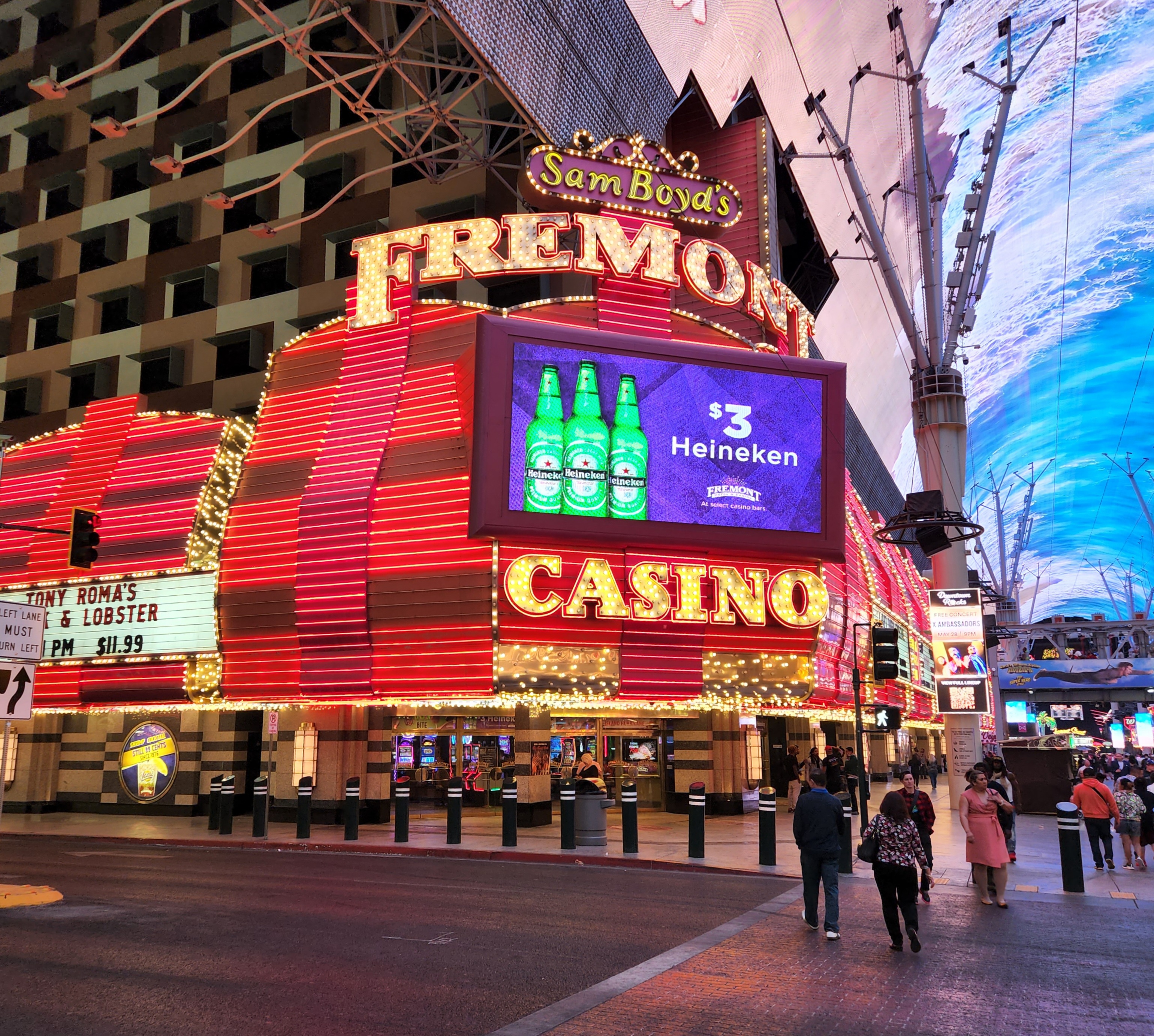 Recent additions include The D Las Vegas (2012) and Circa (2020). These hotels/casinos have many of the features of the enormous and expensive casinos on the Las Vegas strip. Circa’s Stadium Swim has six pools that can handle crowds as large as 4,000 people! 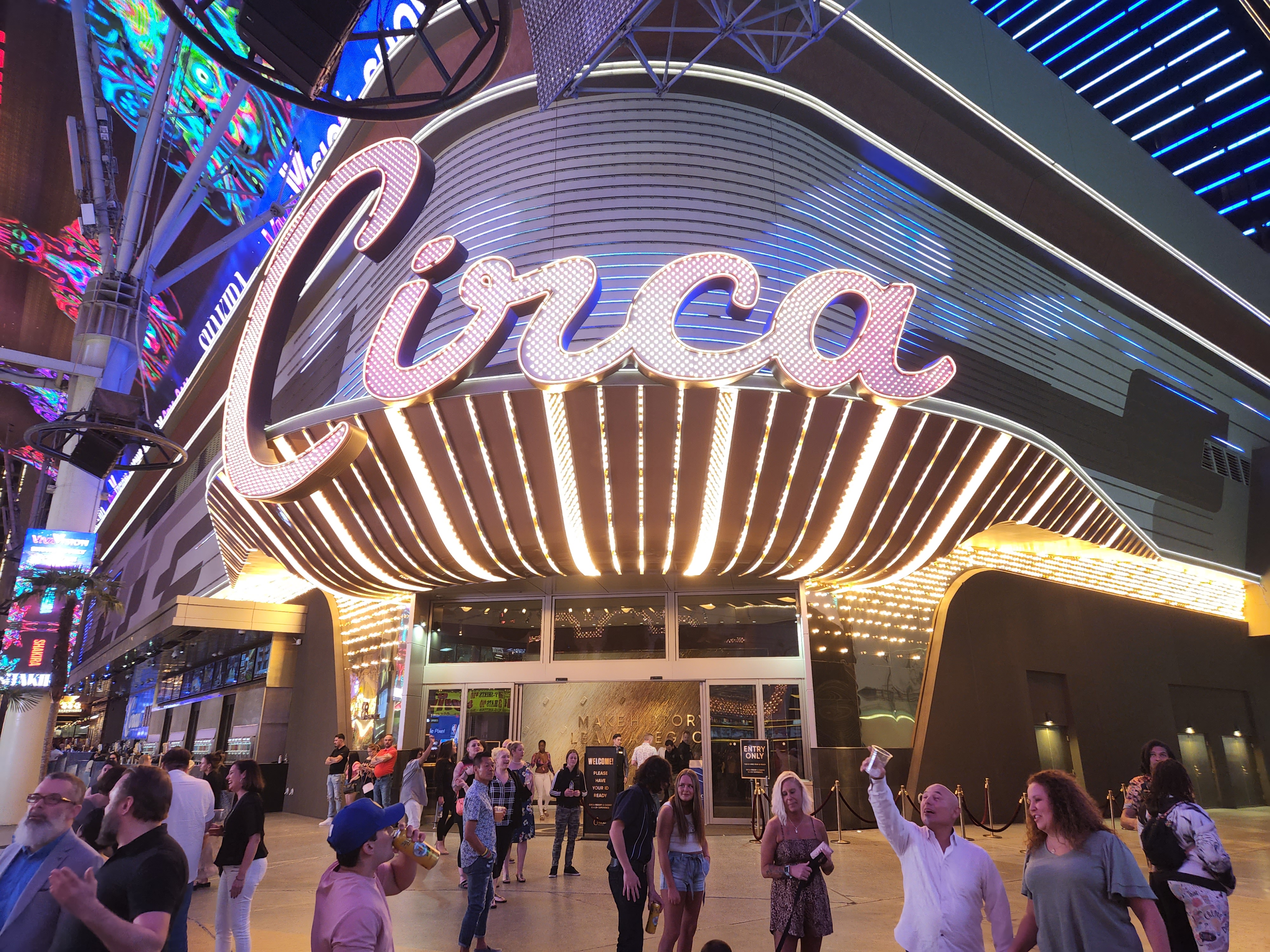 Cannabis (marijuana) is legal in Nevada. It is the only state I know of where it is legal to consume in public. The smell of cannabis smoke is wafts throughout FSE but is not overbearing. FSE has several dispensaries, cannabis stores, right on Fremont Street. 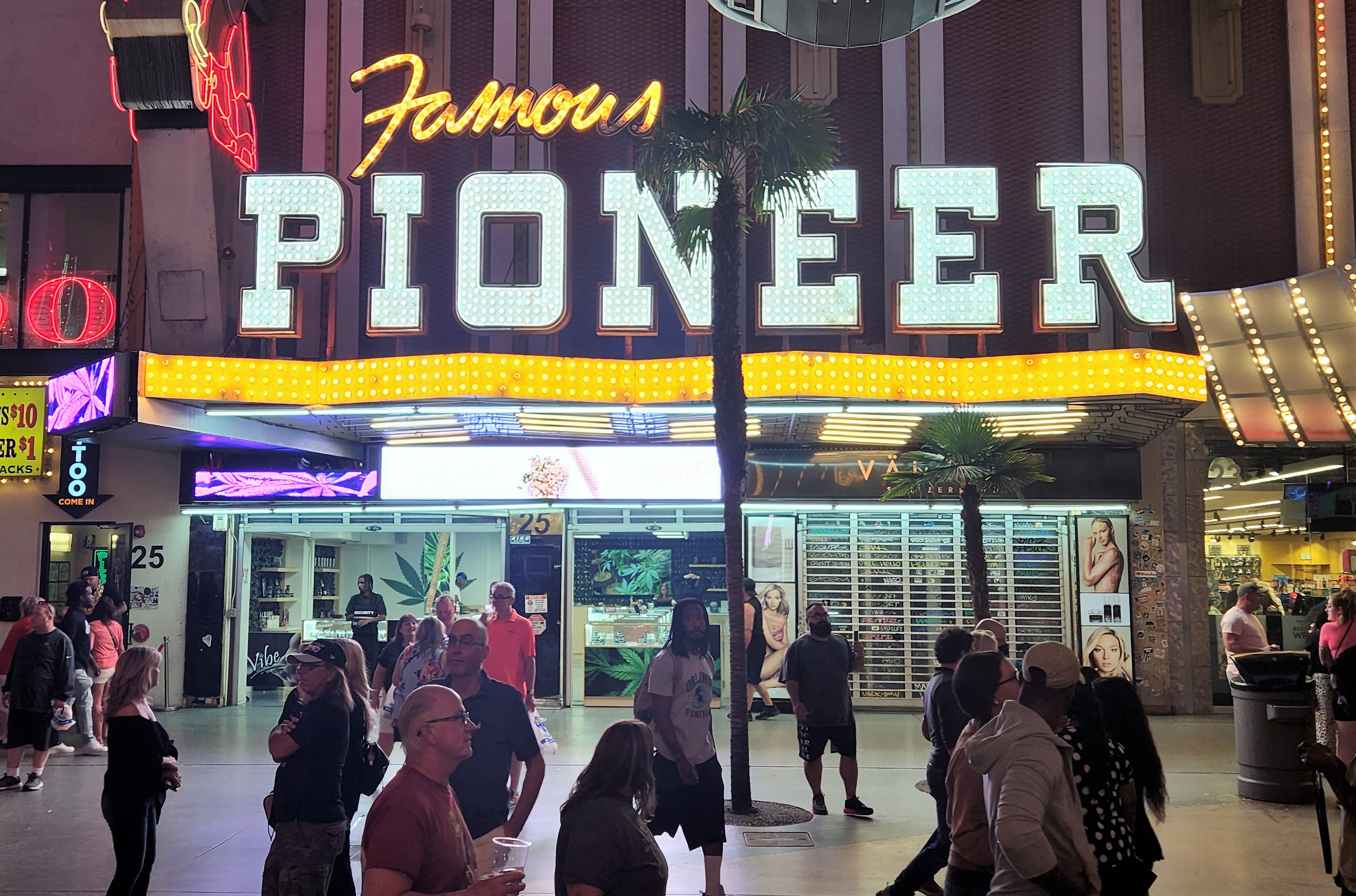 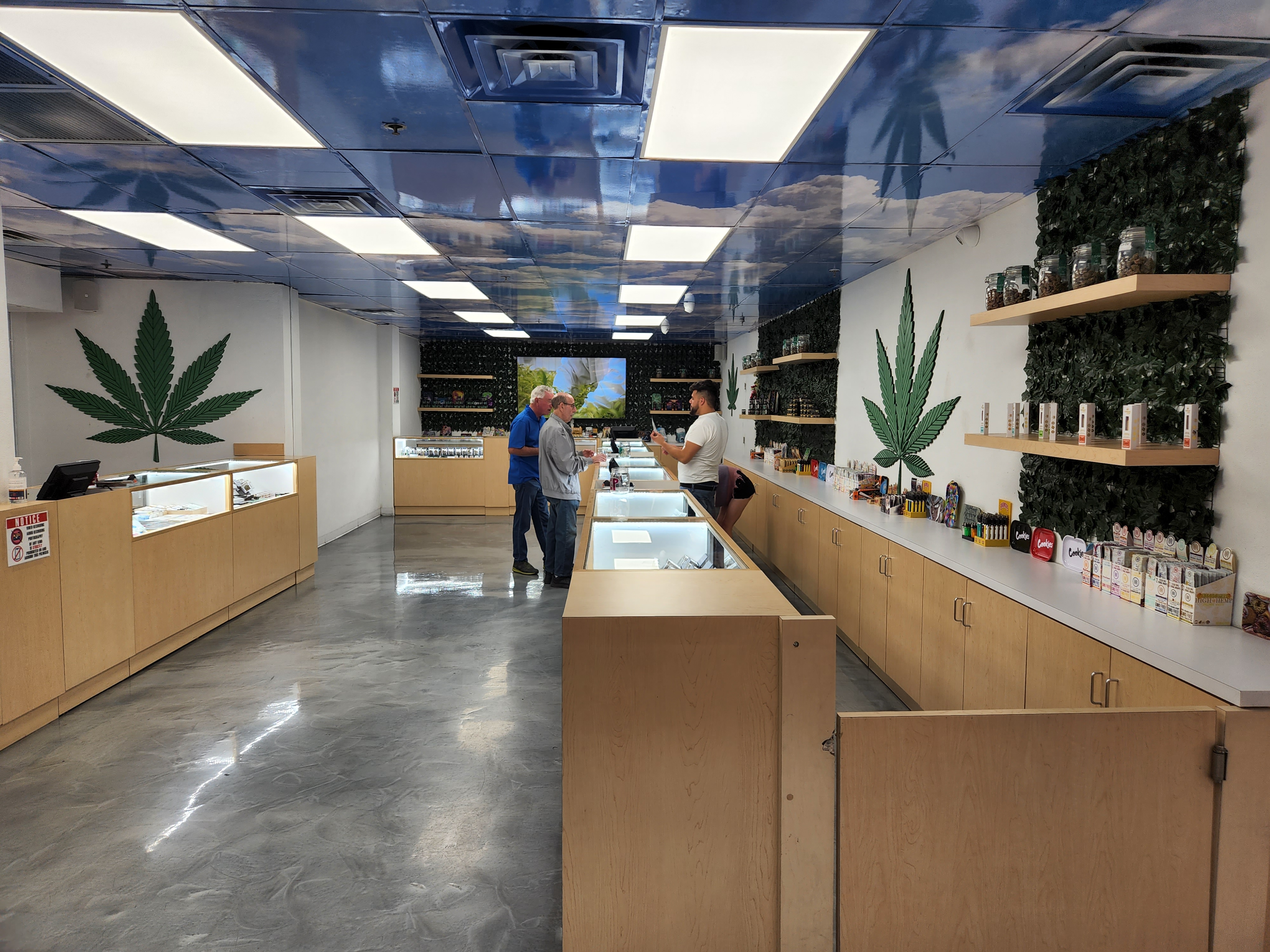 SlotZilla is a 12-story, slot machine-inspired zip line attraction. The intrepid, or merely inebriated, have two options. Zipline starts from a platform 77 feet (23 m) high and travels about half of the length of the pedestrian mall. Zoomline’s platform is 114 feet (35 m) up. Zoomline goes the entire length of the mall 1,750 feet (533 m). Those on Zoomline fly prone superhero-style. 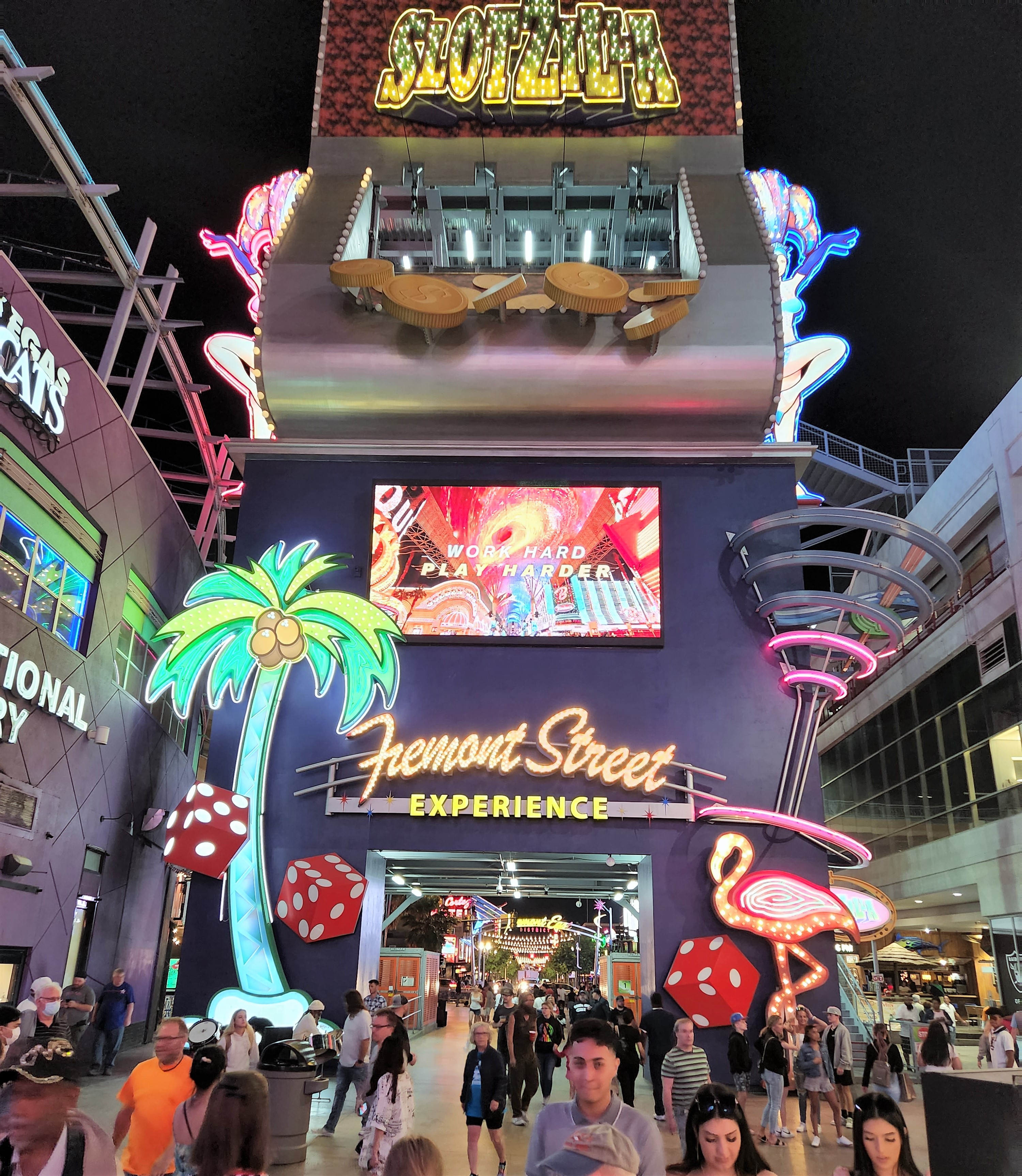 After trying a chair-type zipline in Thailand, I had to try superhero style. 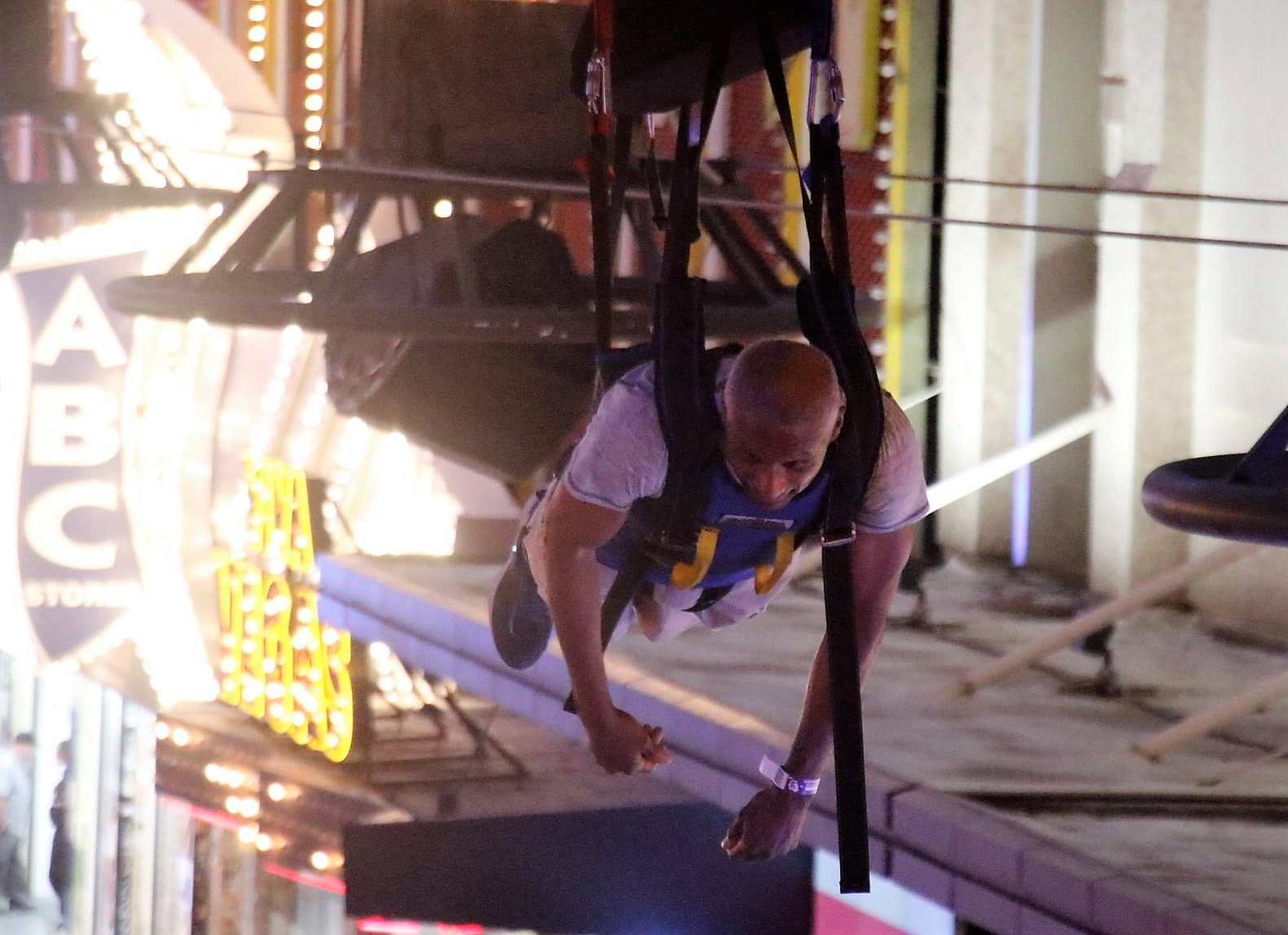 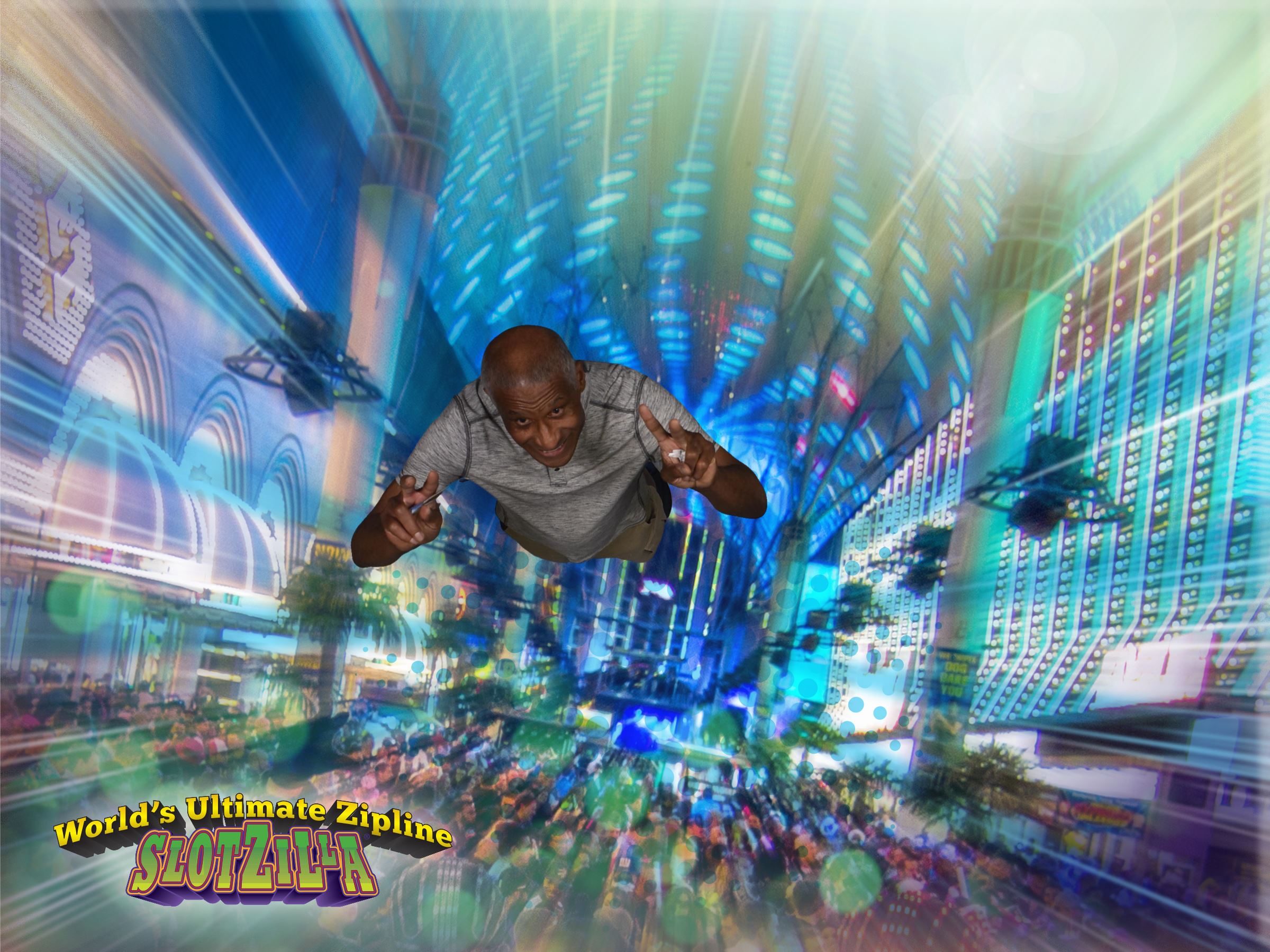 There are many places to eat on Fremont Street or in hotels. Food and drink prices are generally lower than what is available on the Strip. I was surprised to find that one of my favorite fast food joints had a prime spot. 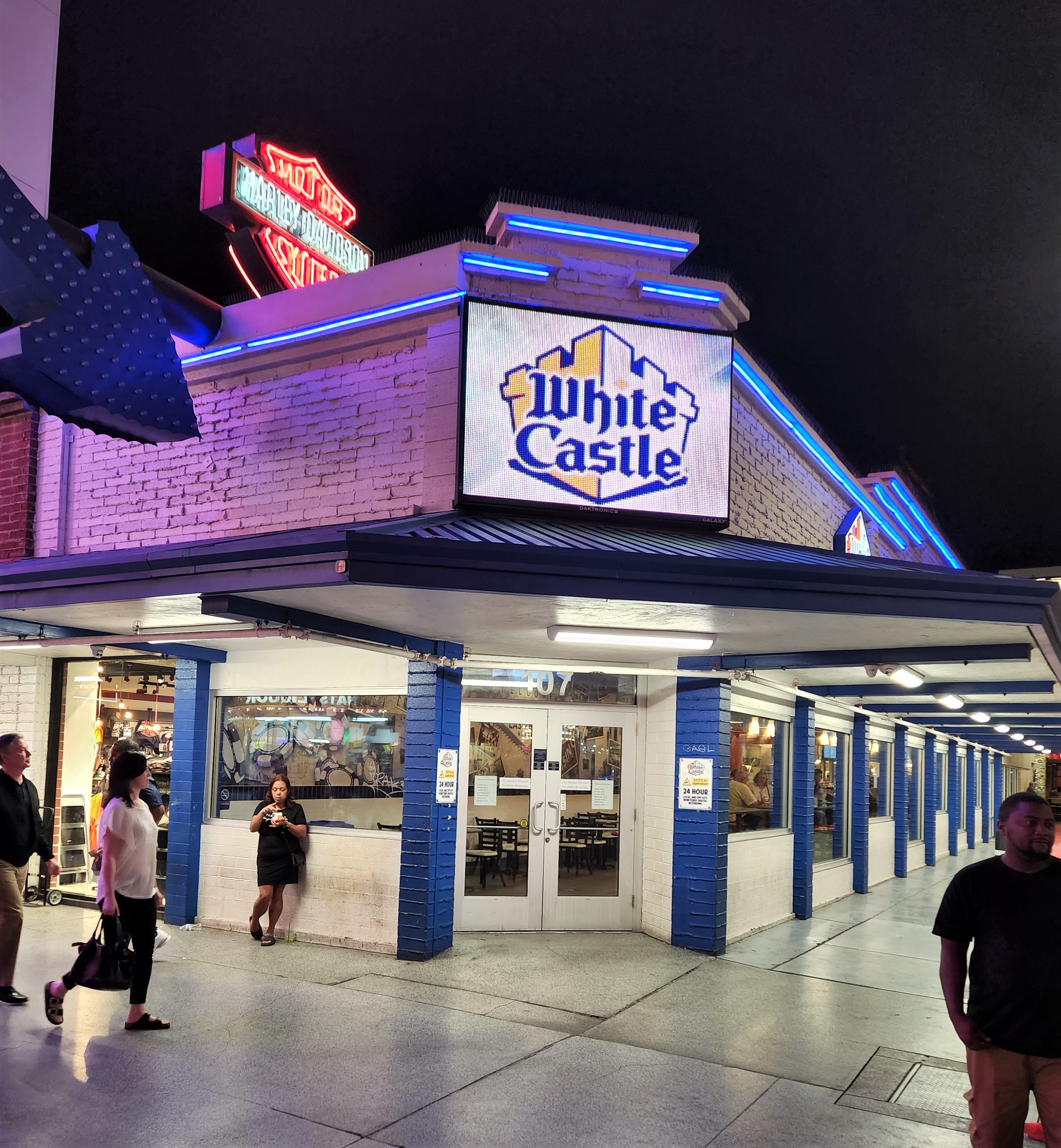 White Castle is a regional hamburger chain that I fondly remember from my youth. There are only about 400 locations mostly in the Midwest and the New York – New Jersey area. Founded in 1921, White Castle is said to be the world’s first fast-food hamburger chain. We stopped for a late-night snack. These little square burgers really hit the spot.

The Fremont Street Experience was a very pleasant surprise. The next time I visit Lost Wages, I mean Las Vegas, I’ll definitely include FSE on the itinerary. The place is clean and as safe as any other place in America with large crowds. The laid-back, retro feel contrasts nicely with the hustle and bustle and fake impressiveness of the Strip. We spent only a few hours at FSE, and there is much more to see in downtown Vegas.

Do you remember Fremont Street from movies and TV?