Delphi was famous throughout the ancient western world as the home of the oracle of Apollo. For several centuries, seeking the advice of the oracle was considered essential before embarking on major affairs of state or making decisions about important private matters. Delphi was the highlight of my to trip Greece in October 2021. It was my first international trip since March 2020.

I should have blogged about this site month’s ago, but for some reason never did. Better late than never.

I booked a full-day, group coach tour from Athens. That seemed to be the easiest and by far the least expensive option to see this site. You can also arrive by train, bus, private car or ride share. Getting there takes about three hours except a public bus takes considerably longer.

Delphi is situated on the southern slopes of Mt. Parnassus.  It overlooks the valley of the Pleistos River and is about 6 miles (10 km) north of the Gulf of Corinth.  Ancient Greeks viewed Delphi as the center of the Earth.  According to myth, Zeus simultaneously launched two eagles from the ends of the Earth and they met at Delphi.  Delphi is also the legendary site where Apollo slayed the serpent Python.

The Oracle of Delphi

Delphi was a sacred community dedicated to Apollo and the oracle, Pythia.  One source describes the history of the place:

Delphi was inhabited since Mycenaean times (14th – 11th c. B.C.) by small settlements who were dedicated to the Mother Earth deity. The worship of Apollo as the god of light, harmony, and order was established between the 11th and 9th centuries. Slowly over the next five centuries the sanctuary grew in size and importance. During the 8th c. B.C. Delphi became internationally known for the Oracular powers of Pythia–the priestess who sat on a tripod, inhaled ethylene gasses, and muttered incomprehensible words that foretold the future.

The ancient people of the Mediterranean had such faith in Pythia’s view of the future that no major decision was made without consulting the Oracle of Delphi first. Greek and foreign dignitaries, heads of state, and common folk made the pilgrimage to the Delphi sanctuary, and paid great sums for Pythia’s oracles. Since the sanctuary only served the public a few days over nine months out of the year, great sums were paid by the more affluent ones in order to bypass the long line of pilgrims.

Plutarch served as a priest at Delphi, and in his histories he has left many details about the inner workings of the sanctuary. Pythia entered the inner chamber of the temple (“Adyton”), sat on a tripod and inhaled the light hydrocarbon gasses that escaped from a chasm on the porous earth. After falling into a trance, she muttered words incomprehensible to mere mortals. The priests of the sanctuary then interpreted her oracles in a common language and delivered them to those who had requested them. Even so, the oracles were always open to interpretation and often signified dual and opposing meanings.

Other sources contend that Pythia delivered the prophecies clearly in her own voice with no need for interpretation. Regardless, it is clear that Pythia was the most prestigious and authoritative Greek oracle.

Pythia was chosen among the priestesses of the temple upon the death of the previous Pythia. It is believed that women who were chosen were probably from the upper class, highly educated, and well-read. Pythias were among the most powerful women of the classical world.

The Sanctuary of Delphi

The Temple of Athena Pronaia (meaning ‘the one before’ the temple of Apollo’) is a group of temples and treasuries dedicated to the goddess Athena. It is located about one kilometer east of the main sanctuary at Delphi and is the first temple encountered by pilgrims from the east — hence the name. Its most famous structure is the Tholos of Delphi, a circular temple that was supported by 20 Doric columns.

The path of the Sacred Way leads up the mountain to the Temple of Apollo and the  structures of the upper sanctuary.  Below is a site plan of the upper sanctuary of ancient Delphi curtesy of Wikipedia.  For perspective, the wall that surrounded this part of the sanctuary was 190 meters (620 ft) long by 135 meters (443 ft) wide. There were nine gates.

The Temple of Apollo is where Pythia presided and worked her magic.  Partially restored Doric columns are at the front. Pythia received the inspiration for her weighty prophecies in the Adyton at the rear of the temple. 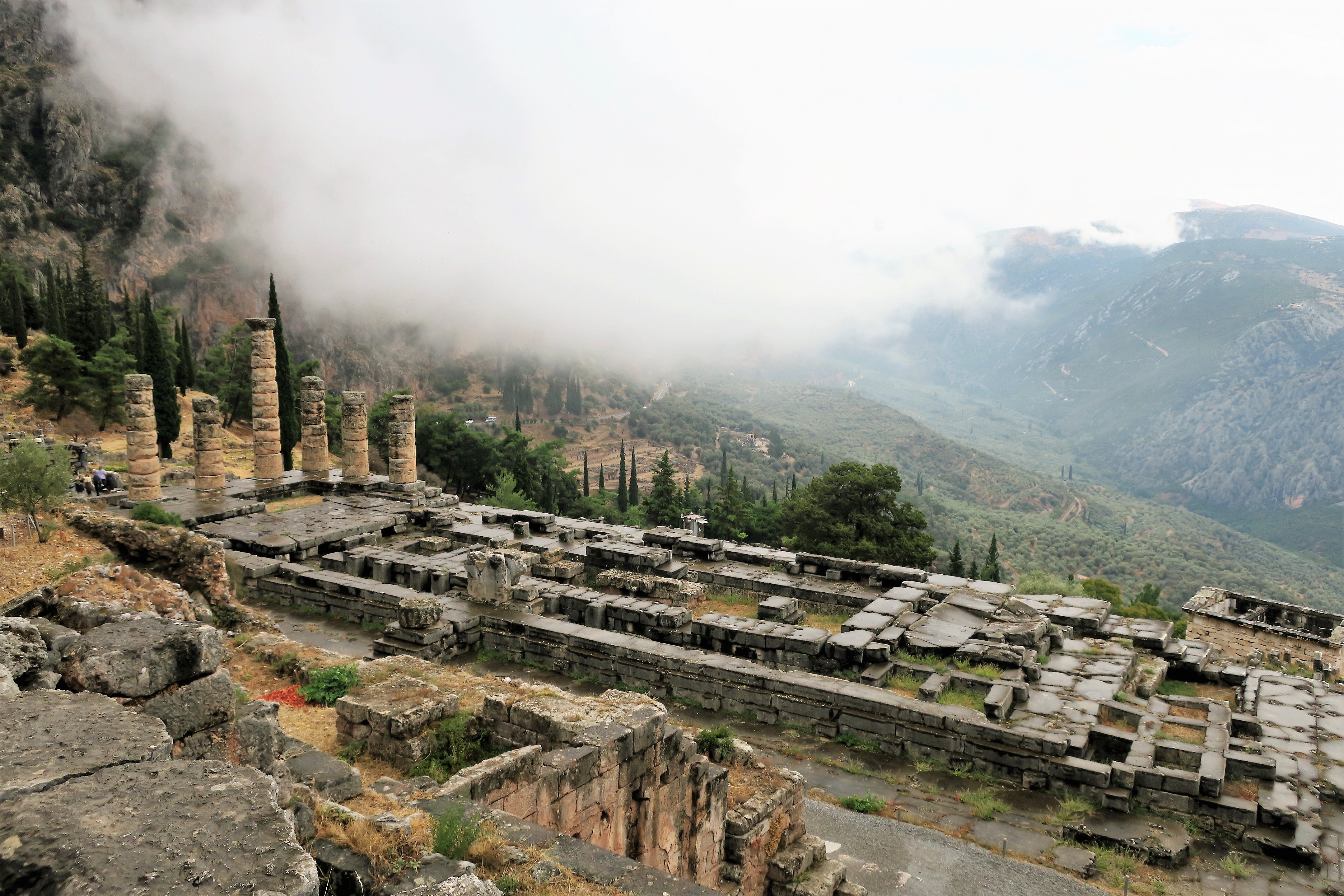 Placed in front of the Temple of Apollo, the main altar of the sanctuary was made of black marble. An inscription on the base names Chios, “ΧΙΟΙΣ”, an Aegean island, as the donor.

The Serpent Column was erected near the Altar of Apollo. After the Battle of Plataea, the last battle of the Greco-Persian Wars, the Greeks erected a bronze column of three intertwined snakes to commemorate the 31 Greek city-states that participated in the battle.

Below are some of the Ionic columns of the Stoa of the Athenians. The stoa was positioned in front of the Polygonal Wall, a retaining wall that supports the Temple of Apollo. A stoa is an open-sided covered area commonly referred to as a marketplace but which also served political and general business functions.

To ensure access to the oracle, commemorate victories and special events, and potentially influence the oracles readings, city-states made votive offerings. Some offerings were placed along the Sacred Way. Others were kept in buildings called “Treasuries” — literally “place where gold things are put”.

City-states had separate treasuries. The Athenian Treasury has been partially rebuilt. 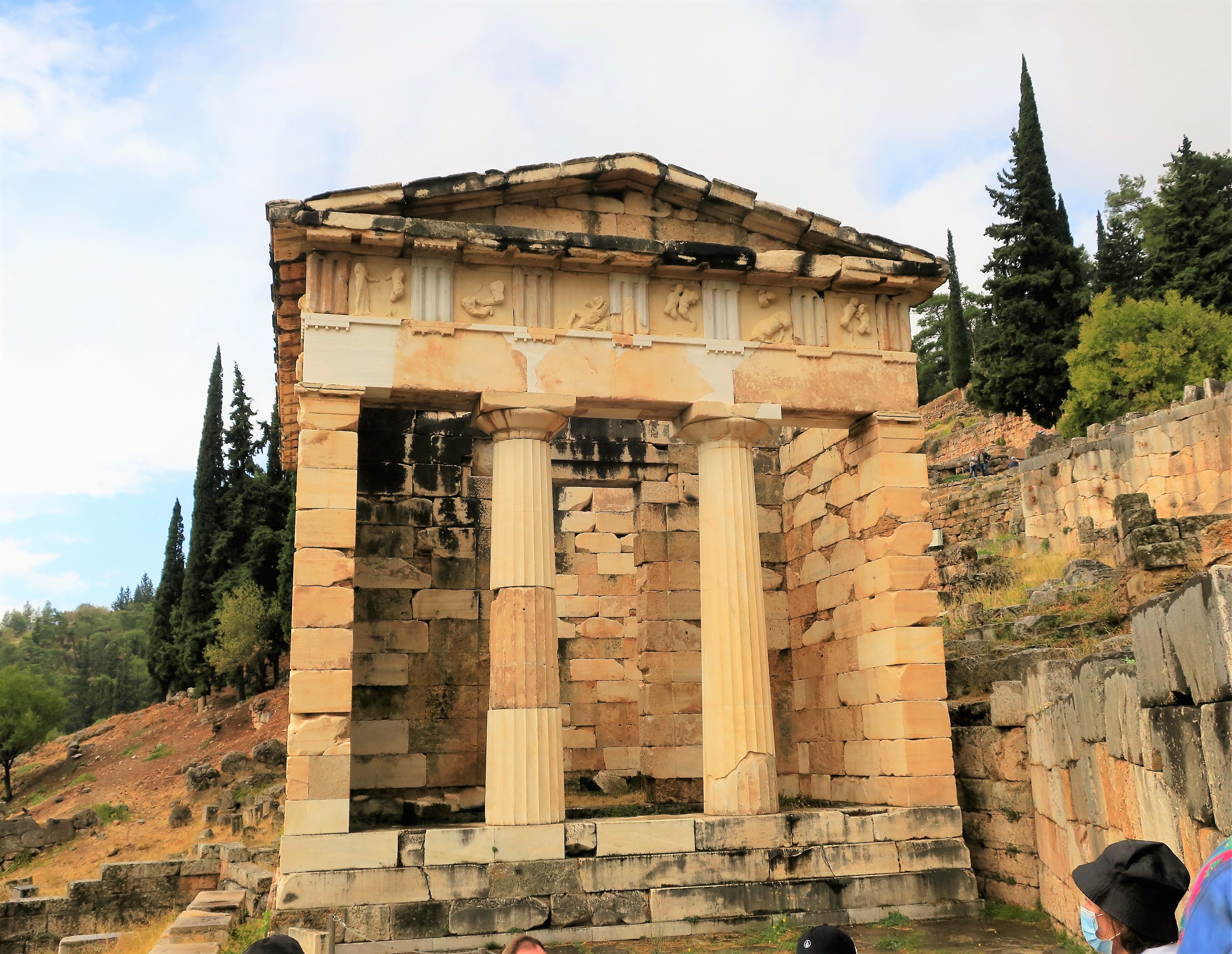 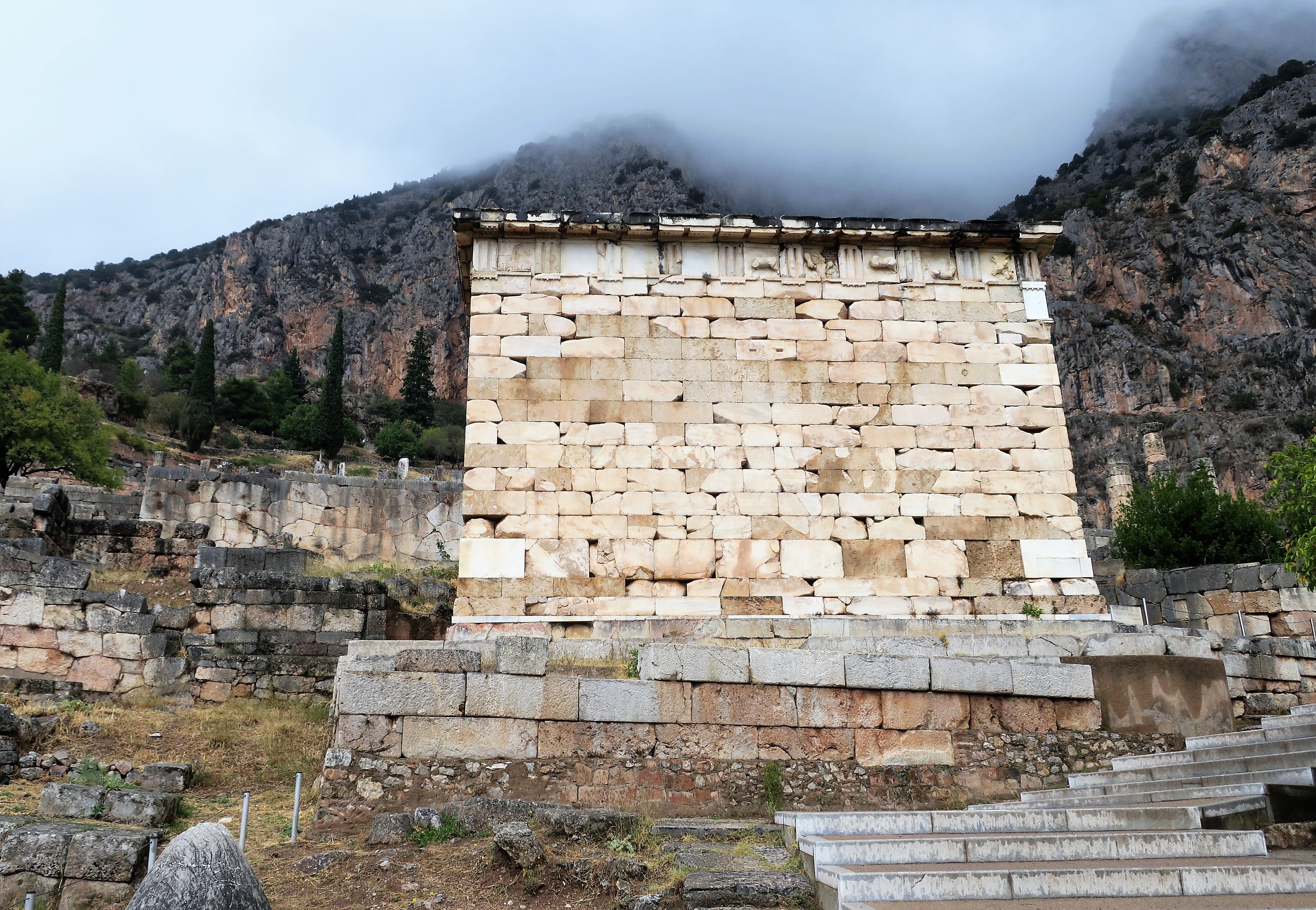 Delphi was all about religion, but the site was more than just temples and treasuries.

Following the Sacred Way leads to a magnificent theater perched above the Temple of Apollo.

The theater has a capacity of 4,500 and enjoys panoramic views of the sanctuary and the valley. 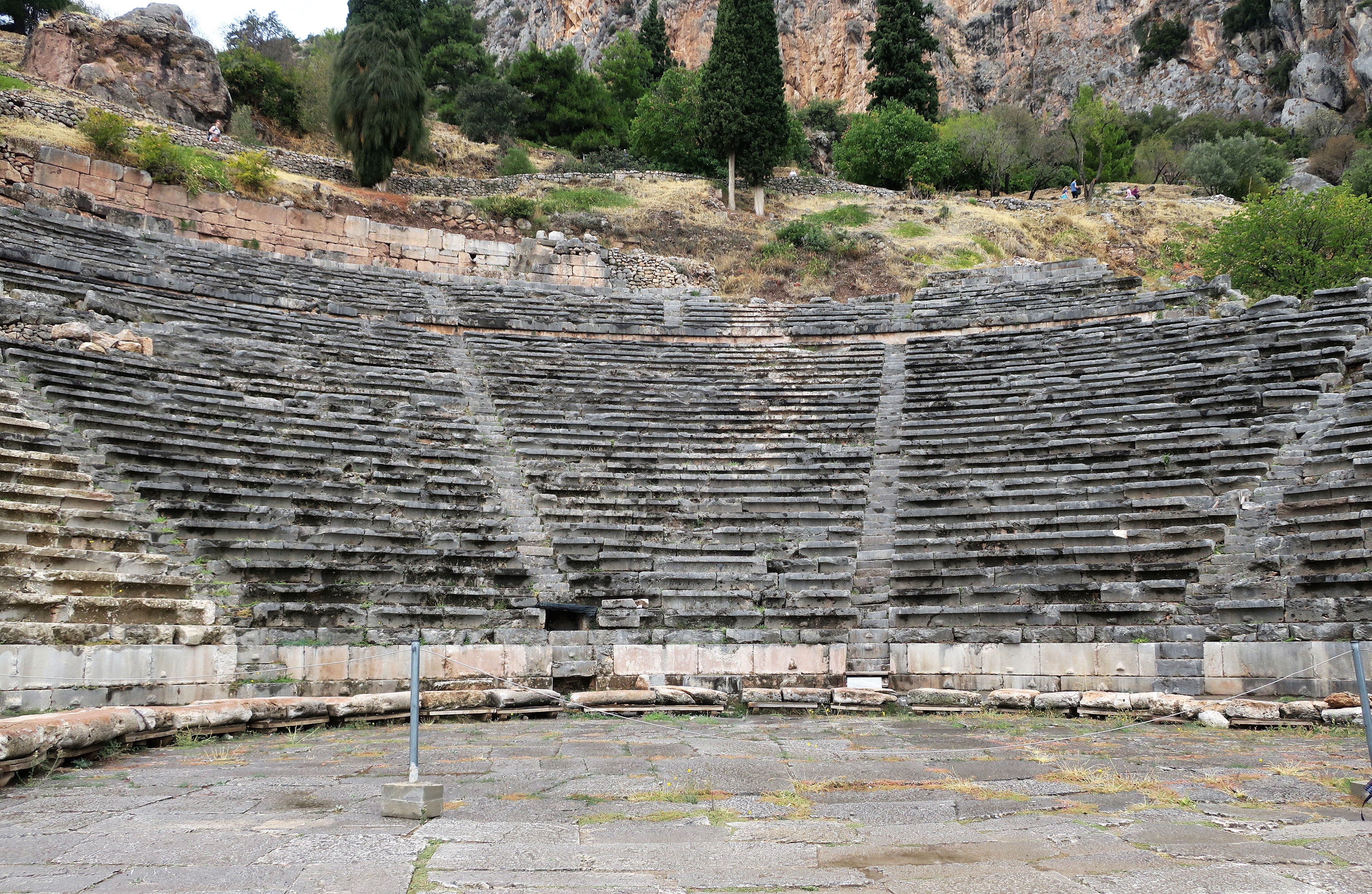 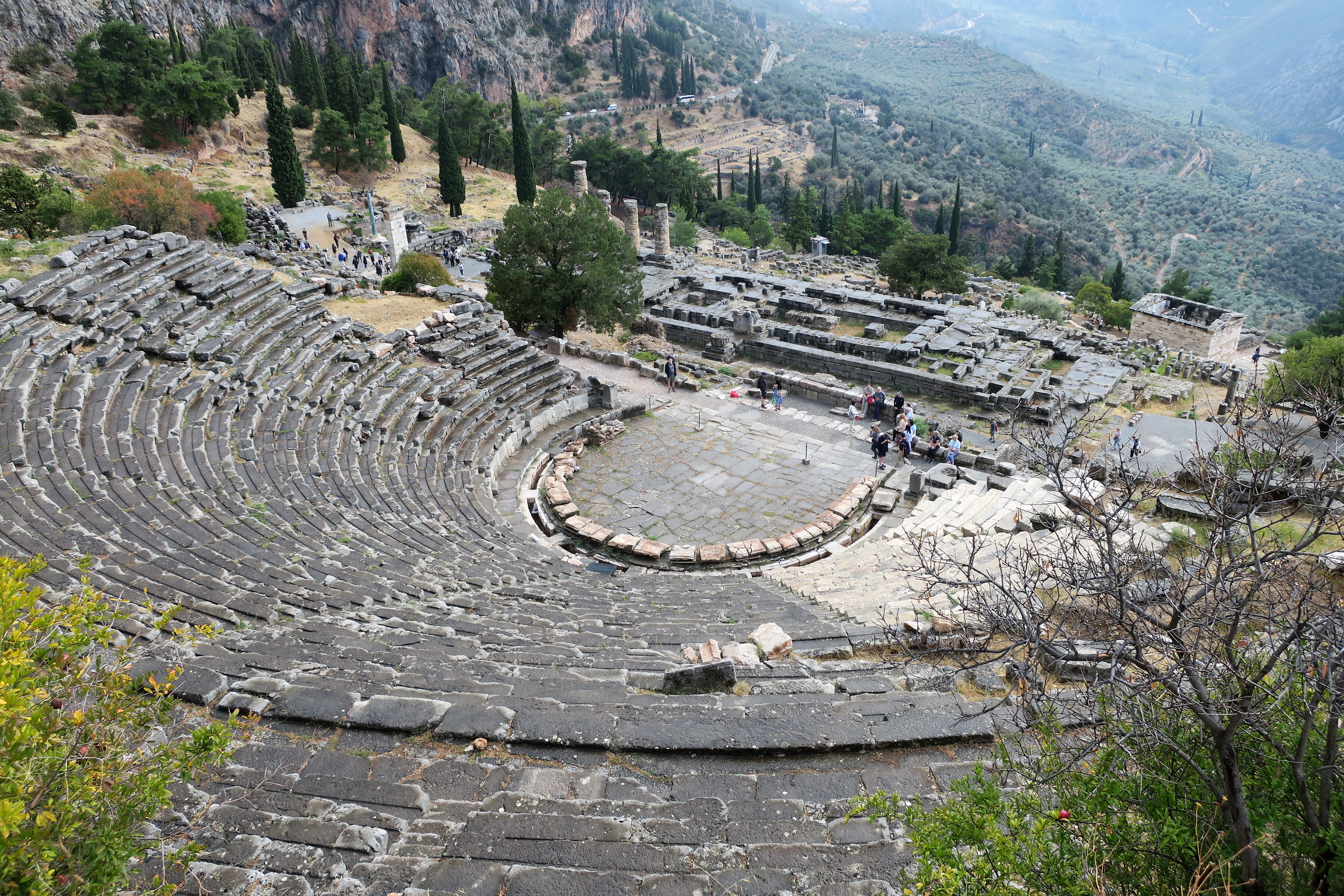 The Pythian Games were held at Delphi, the sanctuary of the god, Apollo, once every four years in order to honor him. The first documented instance that these games took place originated around the 6th Century B.C. and they were designed to celebrate the physical prowess of the top athletes and competitors in Greece. However, unlike other events, such as the Olympic Games, individuals competed in more than just athletics.

Although it was established near the end of Delphi’s popularity, the Roman stoa and agora are the first and last things visitors would see entering and exiting the sanctuary. This area was where pilgrims would buy offerings and other cult objects. (It seems the Romans were good at marketing, or maybe they just ran out of space.) The stoa was also a place for artisan workshops.

The Gymnasium was where athletes trained for the Pythian Games. It is located between the upper sanctuary and the Temple of Athena Pronaia. We didn’t visit but I got photo from a distance. 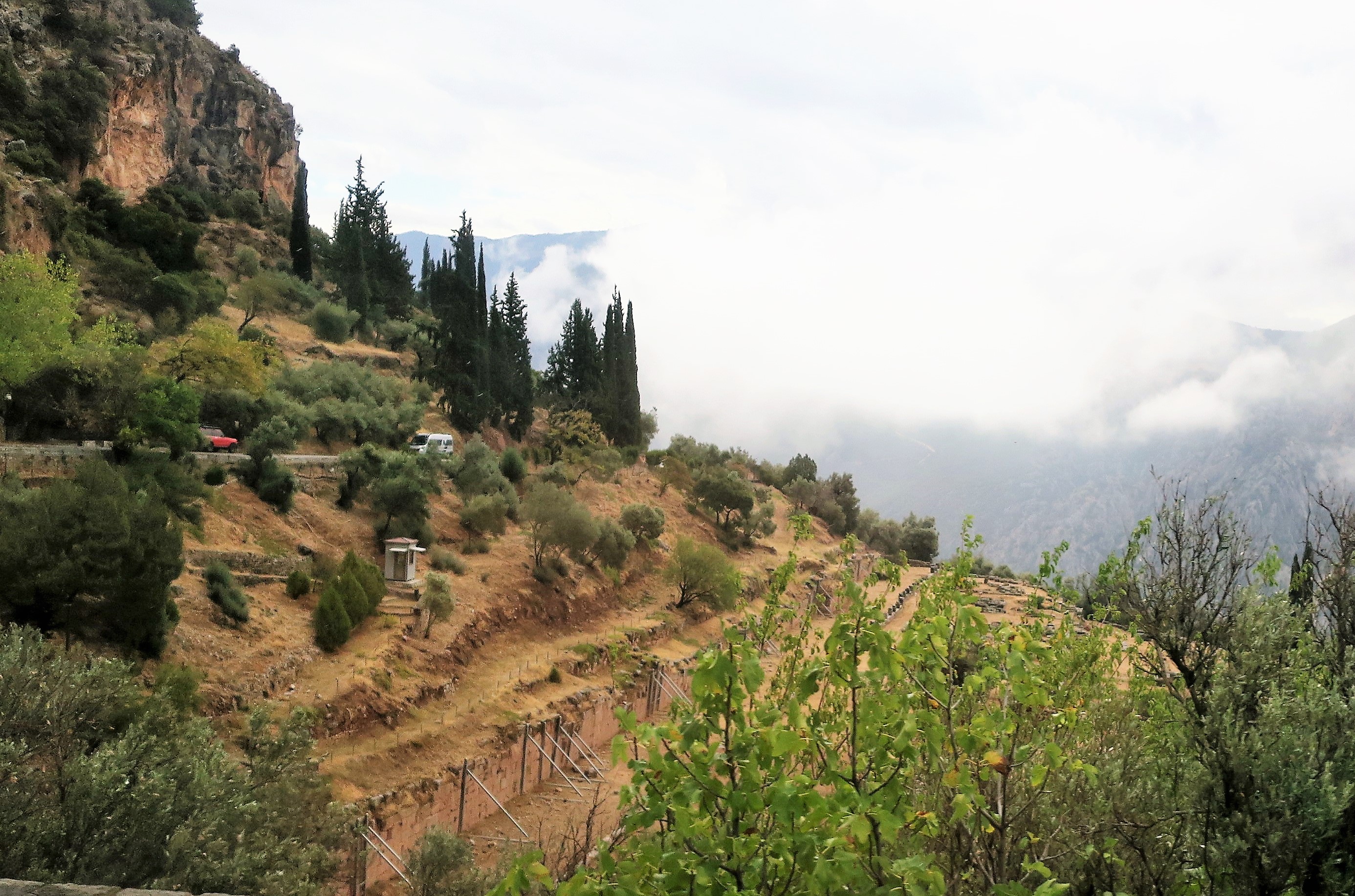 It was built on two levels due to the steepness of the slope. The upper level consisted of the xystos or long colonnade where the athletes practiced in bad weather and a parallel track in the open air. The lower level contained a venue for wrestling (palaestra) and baths. They say one of the columns there bears an inscription by Lord Byron. The Gymnasium was also used for intellectual and cultural events.

Given the importance of the oracle and the value of the offerings that were placed there, it is not surprising that several wars were fought for control Delphi. Eventually, the oracle fell out of favor as the worship of Apollo was replaced by Christianity.

Sporting shining temples, treasuries, agoras, a theater and stadium, situated on the steep slopes of Mt. Parnassus and overlooking the valley of Phocis, I can only imagine how stunning Delphi must have been in its day. Today, it is mind blowing to think of rulers and conquerors basing their decisions on the often ambiguous prognostications of a women sitting in a basement inhaling intoxicating vapors seeping up from a cavern below. But that is exactly what people did and what they strongly held as truth.

Walking the Sacred Way was very impressive even knowing that the legends were myths. I could almost “feel” the presence of ghosts of ancient pilgrims, priests and priestesses. The next post on Delphi will cover the the rediscovery of this site in the 19th century and Delphi Archeological museum where artifacts from Delphi are displayed.

Thanks for sticking with me through a long post.

52 thoughts on “Delphi Sanctuary And Archeological Site – A Trip Report”