This flight was part of the amazing deal I purchased through Air France for business class travel between Dallas, TX and Nairobi, Kenya in May 2022. This flight was not part of the original itinerary. When a delayed Delta flight from Dallas to Detroit, MI caused a missed connection on the flight from Detroit to Paris, France, I was able to rebook the trip through Delta on any Delta/Skyteam flights that were available.

The original return routing involved a flight operated by Kenya Airways (KQ) from Nairobi (NBO) to Accra, Ghana (ACC) on a B737-800 with domestic business class seats.

The new route I selected swapped the narrowbody 737 to ACC for a flight to Johannesburg, South Africa (JNB) on one of KQ’s 787-8 Dreamliners with international business class (lie-flat) seats. 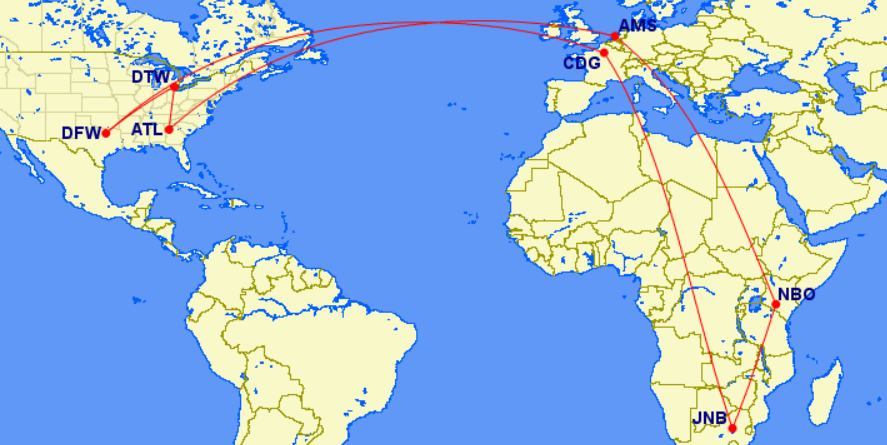 Kenya Airways, is the flag carrier airline of Kenya. The company was founded in 1977. Its hub is Nairobi’s Jomo Kenyatta International Airport (NBO). Kenya Airways is currently a public-private partnership. The largest shareholder is the Government of Kenya. Air France–KLM owns an 8% stake in the company.

Kenya Airways is a member of the SkyTeam Alliance. Currently, it operates flights to 35 destinations in Africa as well as Amsterdam, Dubai, Guangzhou, London, Mumbai, New York and Paris. Kenya Airways carries over four million passengers annually. The fleet consists of 32 passenger aircraft and two freighters. The widebody fleet is made up of nine B787-8 aircraft.

Along with KLM and a few other airlines, Kenya Airways respects its aircraft enough to name them. I commend that.

In May 2022, I needed a Covid-19 test to fly to the U.S.. The day before departure, staff at Sankara Nairobi Hotel assured me that the best place to get tested was at the airport. Waiting to get tested until just before boarding made me a little nervous but I went with their recommendation.

Even though I left the hotel almost three hours before departure, I opted to pay a little more and take the hotel limo rather than a regular taxi or Uber because the limo used the toll road to the airport and avoided Nairobi traffic that can be a nightmare. Taking the limo turned out to be a good decision.

The toll road was almost completely deserted. In the 10-mile drive on the toll road, we encountered only a handful of vehicles. If that is typical, the system will be lucky if tolls are sufficient to pay for salaries of the toll-booth attendants much less any other costs. Travelling on an empty multi-lane highway was eerie. We arrived at the airport in about 20 minutes.

It turned out that at NBO there was a security check before vehicles were allowed to enter. Foreigners were required to get out, go to a building beside the road, and present credentials for inspection.

The security check and vetting was a surprise but took no more than 15 minutes. The Covid test was another story.

The problem was finding the testing site. It was necessary for travelers to the U.S. to show a negative test result before being allowed to enter the terminal at NBO. I had the testing site address, but people (even the security guards who had to see the result) didn’t know exactly where it was located.

There was no facility to be found even though GPS said I was at the correct location. I finally found it after someone suggested that the facility was located on the second floor of the parking garage.

I took the antigen test. Less than 20 minutes later the certification of a negative result was emailed to my phone.

I checked in for the flight at the SkyPriority lane for business class and SkyTeam Elite Plus passengers. The agent confirmed my seat assignments and issued boarding passes for all flights on the return. She was courteous and efficient as were the agents at security and staff at the KQ Pride and Simba lounges that I visited before boarding.

The flight boarded at Gate 17. The gate was in a small building located near but not in the main terminal. Passengers walked across the tarmac to the building. Boarding was through a single skybridge gerbil tube connected to the second door on the plane’s port side directly behind my seat.

Kenya Airways World Premier seat is a Zodiac Aura Lite product that provides 21 inches (53 cm) of width and 74 inches (188 cm) of distance between seats. These seats recline to an angled lie-flat position. I selected Seat 3A, a window seat on the port (left) side.

One nice feature of these seats is there is plenty of room for your feet (unlike most business class seats) and even useable storage space for shoes and a personal item under the footrest. The video remote, headphone jack and electrical outlet are in a compartment under the armrest between seats. 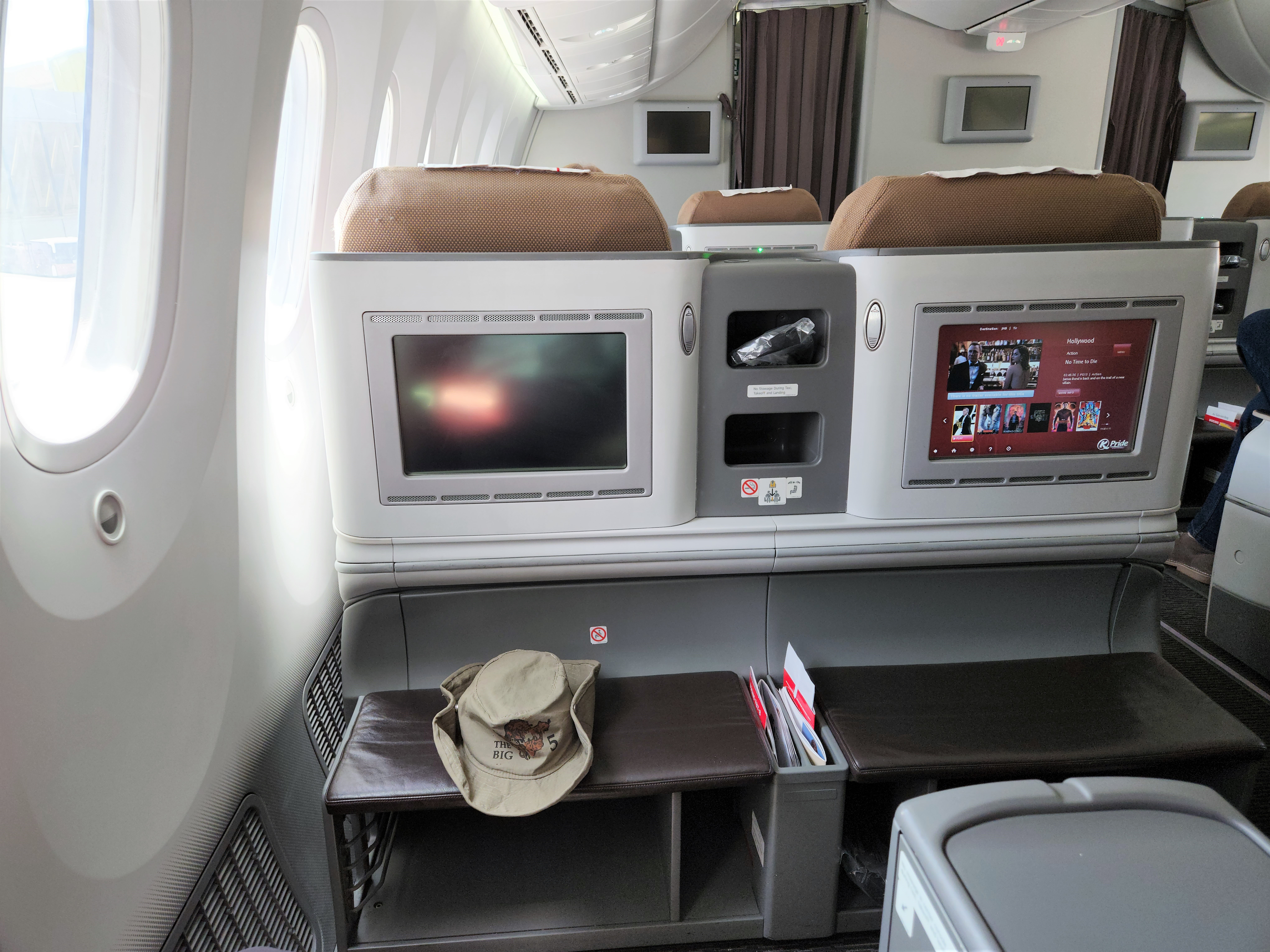 Seat controls are close at hand on the middle armrest and easy to understand and use.

Each World Premier passenger received a noise-cancelling headset, blanket and pillow. There was no amenity kit or bottled water.

Flight attendants offered a choice of wine, champagne or orange juice before departure. Pushback was at exactly 13:05 as scheduled. The captain taxied to Runway 06, took off at 13:14, and climbed smoothly through a low layer of scattered cumulus clouds.

I perused the wide selection of movies, TV shows and music on the in-flight entertainment system after takeoff. I picked Wonder Woman ’84, a movie I’d seen before, put on the noise-cancelling headset and stretched out.

I held off on dimming the 787 electronically dimmable windows in hopes of another glimpse of Mount Kilimanjaro and was rewarded. 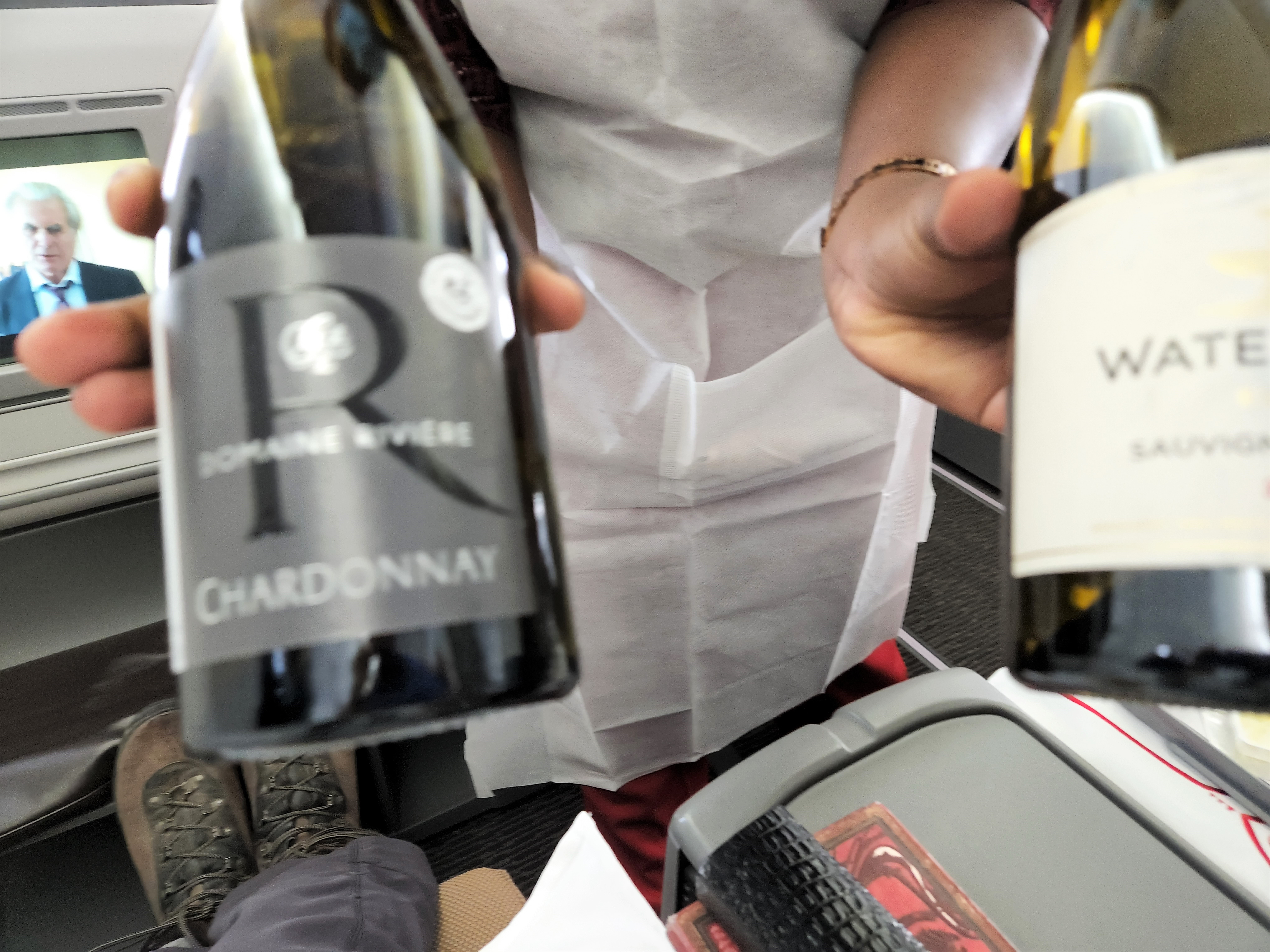 I was surprised that there were no menus for food or beverages. The choice was beef, fish or vegetarian and they were out of beef. I went with fish. There was no appetizer, soup or salad.

A tablecloth was placed on the tray table but the meal was served on a tray. 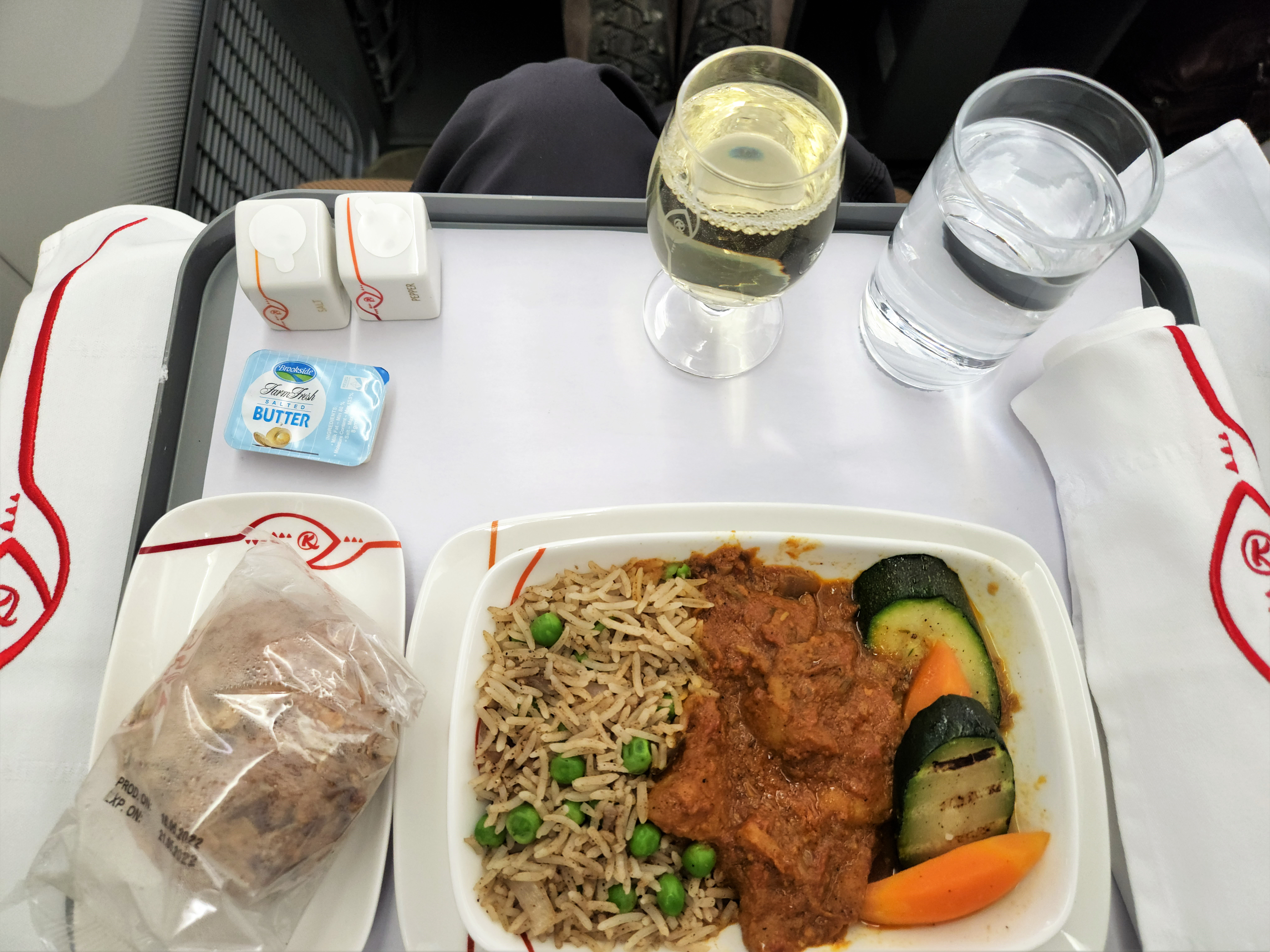 The food tasted fine although I expected something better based on business class flights I took on Kenya Airways several years ago. Covid 19 may have been responsible for the downgraded service.

Desert, accompanied by a delicious but unknown port wine, was the best part of the meal.

There was no additional beverage or snack service offered, and I didn’t request any. After dinner a flight attendant came by to ask how service could be improved. That was impressive.

I dimmed the windows and continued watching the movie. 787 windows are technological marvels because the person in the window seat (or the cabin crew) can adjust the amount of light that comes in. The amount of light can vary from totally transparent to almost totally opaque. All other airplane windows basically have only two settings – open or closed.

There was time to kill after the movie so I undimmed the windows and gazed at the African landscape from 43,000 feet (13,100 meters). That is the maximum service ceiling of any commercial airliner.

I had a peaceful and comfortable trip even though the aisle seat was occupied and Row 3 is just in front of the aft business class galley and restrooms. The meal was served from the forward galley and I never bothered by any noise from the bathroom. When I needed to get up, I just excused myself and stepped over my seatmate who had placed his seat in a lie-flat position.

Our descent began about 70 miles from Johannesburg’s O. R. Tambo International Airport (JNB). We were at the gate at 16:04 local (17:04 Nairobi) time which was 15 minutes ahead of the scheduled 4h and 15m flight time.

Compared to my Kenya Airways 787-8 three-hour flight form Hong Kong to Bangkok, the service on this flight was mildly disappointing. In 2017, that shorter flight offered an amenity kit, slippers and menus. On the other hand, the Kenya Airways World Premier seat and 2-2-2 arrangement was more than satisfactory for a relatively short international trip. I was pleased that I switched the routing and flew a KQ 787 rather than a 737-800.

Thanks for reading. I invite you to view other posts from the Kenya trip in May 2022.

A Peek At Village Life On The Maasai Mara – Photo Review