My expedition into the Latin dancing scene in Taipei held a couple of surprises.  I had never been to Taiwan or Taipei so the first surprise was to learn that Taipei had a very active Latin dancing community.  Thanks to Google, I found  what seemed like a good spot to sample the local Latin dance scene.  It was at a restaurant/club called The Brass Monkey.

I gave the address for The Brass Monkey to the bellman at the Sheraton Four Points hotel and he instructed the taxi driver, in Chinese of course, as to where I wanted to go.  I also took a card with the name and address of the hotel along with a small map.  When it was time to come back to the hotel, I could just give that card to the taxi driver.

After a 20-minute taxi ride, we pulled up in front of The Brass Monkey.

The Salsa beat greeted me when I got out of the taxi.  Tuesday night is Salsa night at The Brass Monkey.  I arrived fairly late, and on this night it wasn’t very crowded.  That means there is room to dance.

One surprise was I ran into DJ Cola whom I had met at the Boracay Latin Dance Festival in November.

The biggest surprise, however, was running into J.J. an old friend from Cincinnati, Ohio.

J.J. was an active member of the Salsa dance community in Cincinnati.  I knew she was from Taiwan, but never in my wildest dreams had I imagined that I would run into her in Taipei.  I had not seen her since I moved to Charlotte, North Carolina in 2006!  The Latin dance community is worldwide.  You never know who you might run into in any location.

After reconnecting with J.J., I had a chance to meet and dance with Jessie Lin, one of the dance instructors who organizes the Latin night at The Brass Monkey.

Jessie is a great dancer and her studio has a lot of students who energize the Latin dance scene in Taipei.  I should have asked Jessie if she was any relation to Jeremy Lin (ha ha).

Dropping in at the Tuesday night Salsa party at The Brass Monkey was way better than I  had expected.  Moreover, I learned that there was another Salsa party at a different location the following night.

Salud! Salsa Party is a small club in central Taipei that has dancing Monday, Wednesday Thursday and Saturday.  I had the address and a small map on a card I got the previous night from one of the dancers at the Brass Monkey.  It was provided to the taxi driver at the hotel.  Nevertheless, the taxi driver seemed to have a hard time finding it.  He drove around the same area a few times without luck.  Fortunately, I was able to zero in on the location because the map on the card showed a McDonald’s near the street it is located on.

The club is on a very small side street.  So when you see the McDonald’s head down the lane next to it.  You will run into the club on the left in less than two blocks.

Salud! Salsa Party is a small club, but it was jumping on this occasion. 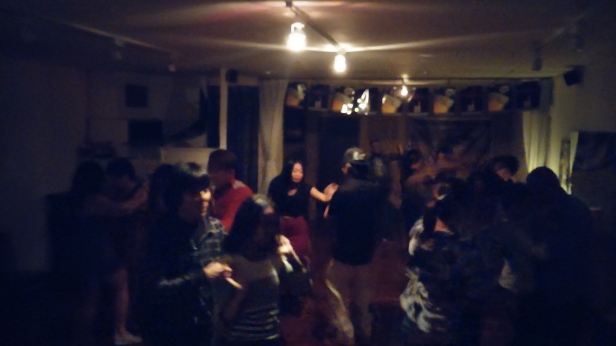 Our bartender was the woman in charge.  She collected the small cover charge (which included one drink), tended bar, and even made it to the dance floor occasionally.

The club was fantastic!  Too bad I didn’t have time to get back there again on this trip.  My only complaint was the music volume was too low.  That’s the first time I’ve said that about a club.  People talking almost drowned out the music.

All in all I was very impressed with my sampling of the Latin scene in Taipei and can’t wait to return.

Next, I’ll review my tours of Taipei and the northeast coast of Taiwan.