After the great experiences on Robben Island and Climbing Table Mountain, I again called upon the tour desk at the Westin Cape Town for a Cape Peninsula tour.  It arranged for a day-long tour with a private guide.  Although private guides are more expensive, they provide important advantages when trying to see a lot of things in short period of time.

Other posts about this trip to South Africa.

Camps Bay and the Twelve Apostles

Heading south from central Cape Town, the guide made the first stop at Camps Bay.  Camps Bay, a small, picturesque portion of Table Bay, sits next to a wealthy community of the same name.  The Twelve Apostles is a series of prominent cliffs and peaks that are part of Table Mountain National Park and the mountains that form the spine of the Cape Peninsula.

Proceeding south down the coast, the next stop was Hout Bay.  Entering the town, we passed through one of the townships that are home to the vast majority of Black South Africans.

Hout Bay is known for great fishing, including Yellowtail and Longfin tuna, and a variety of leisure and tourist activities.  On my journey down the peninsula, I had just time enough for a boat ride to Seal Island for an up-close look at Cape Fur seals.

Seal Island (apparently a very popular name for islands around South Africa) is a grouping of wave-lashed rocks near the entrance to Hout Bay. 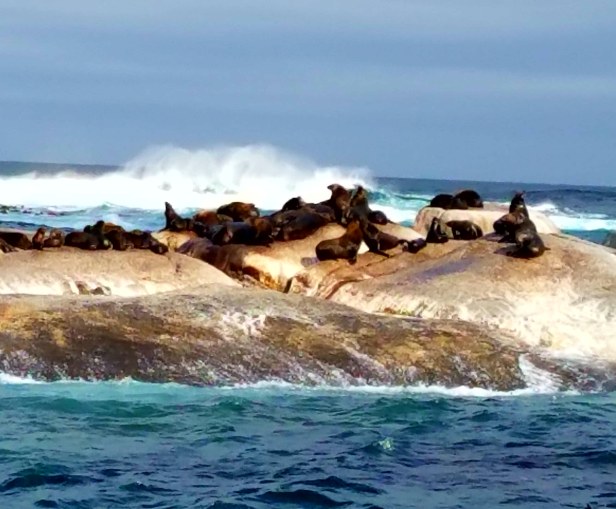 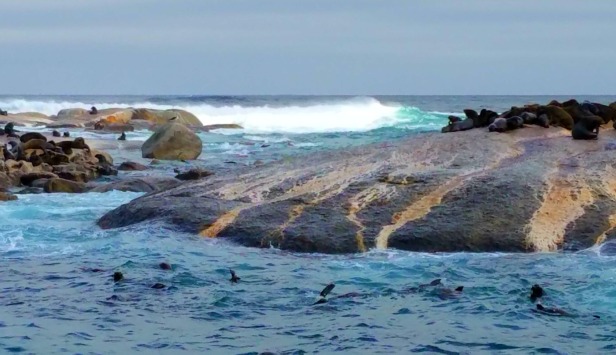 After the seal viewing our route down the peninsula took us along Chapman’s Peak Drive.

Rounding the mountain, the road descends into Noordhoek, a seaside artistic community.

The next stop was in Simon’s Town, home of a major South African Navy base.  Simon’s Town is on False Bay on the opposite side of the peninsula from Noordhoek and Hout Bay.

The colony of African penguins is at Boulders on Foxy Beach.  The site of the Boulders Colony is well within the city.  In fact, it is only a very short distance from the downtown business district. 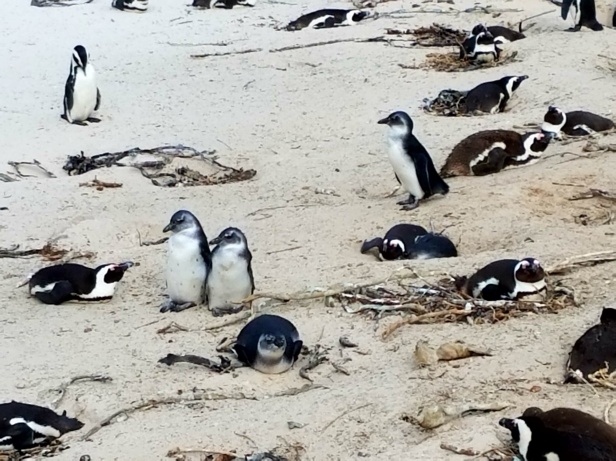 There are about 2,500 penguins in the colony.  A visitor’s center and boardwalk allow up- close viewing without disturbing the birds.

Simon’s Town is reported to be the only place in the world where people can swim with penguins.  This colony is in a nature preserve that bars human swimming.  The penguins, however, didn’t get the segregation memo.  They often invade the surf at nearby public beaches.

The next stop was the Cape of Good Hope and Cape Point.  That report will be covered in Part 2.

The last stop of the day (good thing) was at the Steenberg winery.   The winery is part of the Steenberg Farm, the oldest on the Cape.  The farm was established in 1682.  Wine making began there as early as 1695.

This was my first visit to a winery.  Shocking in this day and age.  And it was my first wine tasting in a long time.

Instead of sitting at the bar, I retired to a lounge with comfortable couches where a server brought the menu. 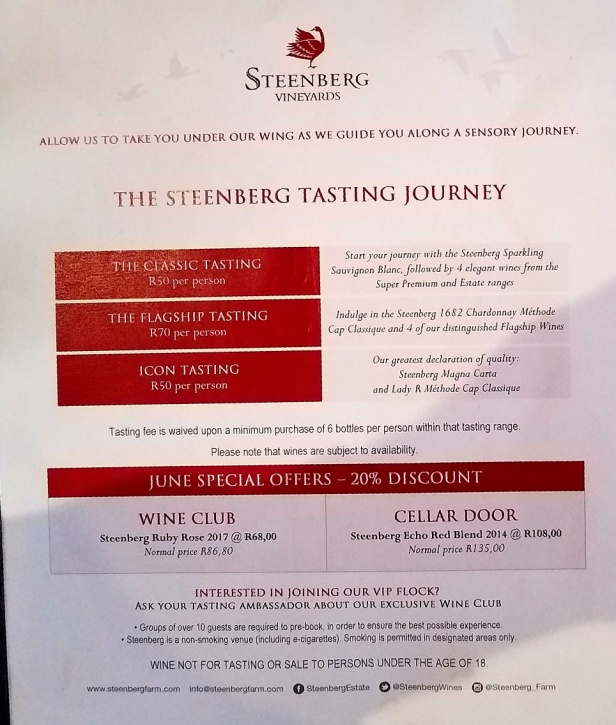 So as not to offend my highly cultivated palette (ahem), I opted for the flagship tasting for 70 Rand or about $5.40.  This tasting included 5 different wines.  I assumed the glasses would be small or that there would be a place to pour out or spit out the wine.   Wrong!

The server poured each glass as if he were serving at a restaurant.  I only drank a portion of each glass.  At the end of the tasting, after consuming most or part of five glasses of wine in 30 minutes, I was pretty soused.  The wine tasted good, but then again, I’m no connoisseur.