While in Paris in November 2018, I made a side trip to Bastogne, Belgium for a private tour of some of the sites of the fighting during the Battle of the Bulge in WWII. The Battle of the Bulge also known as the German Ardennes Offensive (Dec. 16, 1944 – Jan, 16, 1945) was a massive surprise German counterattack along a broad and lightly defended front in the Ardennes. It was the last desperate German effort to avoid total defeat on the Western Front.

I was familiar with the Battle of the Bulge from movies, books, and the Avalon-Hill Battle of the Bulge board game I received as a present at around age 10 or 11. But until going to Belgium in 2018, I’d never heard of Wereth Massacre in which 11 Black soldiers from the 333rd Field Artillery Battalion were massacred by German SS troops on December 17, 1944.

Arriving in England in February 1944, the 333rd and 969th battalions landed in Normandy in July and provided vital artillery support to American forces through months of hard fighting, including the siege of Brest, France. By the time the Allies liberated Paris in August, the two battalions were known as some of the most efficient and hard-hitting artillery units in the US Army.

In October 1944, the units were assigned to what was assumed to be a quiet front, in support of VIII Corps, the 2nd Infantry Division, and later the untested 106th Infantry Division in the Ardennes along the Belgian-German border. The unit took up positions around the small village of Schoenberg near St. Vith, Belgium just a few miles from the German border.

At the onset of the Battle of the Bulge, the 333rd FAB was about 11 miles (18 km) behind the front lines. In the early morning hours of December 16, German artillery began shelling the Schonberg area. By the afternoon, there were reports of rapid advances by columns of German tanks and infantry. The 333rd FAB was ordered to displace further west but the 106th Infantry Division artillery commander requested that C Battery and Service Battery remain in position to support the 14th Cavalry Regiment and 106th Division that were in the process of being surrounded in the Schnee Eiffel.

St. Vith area. Wereth is just to the northeast of the City. Tom Houlihan

By the morning of 17 December, the Germans had captured Schoenberg and controlled the bridge across the river that connected to St. Vith. The Service Battery tried to displace to St. Vith through the village and were hit by heavy German armored and small arms fire. Many were killed and those that remained were captured. As the men were being herded to the rear, the column was attacked by an American aircraft.

It is unclear if they evaded capture initially or were captured and able to escape during the ensuing confusion following the strafing run, but 11 men from the 333rd escaped into the woods. They marched in a northwest direction seeking the American lines. At about 3 p.m., they approached the first house in the nine-house hamlet of Wereth, Belgium. The house was owned by Mathias Langer and his family.

Langer offered them shelter and what turned out to be their last meal, bread and butter.  The area around St. Vith and Wereth had been part of Germany for hundreds of years until it was annexed by Belgium after World War I. A German sympathizer reported that black American soldiers were hiding at the Langer home. Troops from the 1st SS Division quickly moved in to capture the Americans, who surrendered without resistance. The SS marched the prisoners to a nearby field, where they were beaten, tortured, and finally shot.

The 333rd’s A and B battery fared better and made it to Bastogne. They joined their fellow segregated unit, the 969th FAB, and contributed mightily to that historic defense. While supporting the 101st Airborne Division, they suffered the highest casualty rate of any artillery unit in the VIII Corps during the siege with six officers and 222 men killed. For its bravery and effectiveness in defending Bastogne, the 969th received a Distinguished Unit Citation on February 7, 1945, from Maj. Gen. Maxwell Taylor, commander of the 101st Airborne. This was the first Distinguished Unit Citation (Presidential Unit Citation) awarded to an African American combat unit.

Weeks later, when the Allies re-captured the area, a U.S. Army investigating unit discovered that the bodies had broken legs, bayonet wounds to the head and eyes and some fingers cut off. No Germans were prosecuted for this war crime.

I thought it was strange that I’d never heard of this massacre. My guide for the private tour told me of massacre and monument asked if I wanted to see the monument. Henri was nine years old during the battle and lived in the nearby town of Houffalize, Belgium. He later served as an artillery officer with the Belgium Army. M. Mignon has guided many tourists and veterans of the battle over the years and is still guiding.

The reason I’d never heard of this massacre was despite investigating and documenting it along with 12 other massacres of American soldiers and Belgium civilians during the battle, the Wereth massacre was the only one the Army labeled as classified. A 1949 Senate Armed Services Committee documented and investigated the other incidents of Nazi massacres of captured American troops and Belgian civilians during the Battle of the Bulge, but the Committee’s report omitted the killings in Wereth.

After failed attempts to get help from the U.S. government, in September 1994, Hermann Langer, son of Mattias Langer, erected a small stone cross to remember the 11 murdered men. He used pieces from his own family’s gravestones to erect a makeshift cross to mark the spot 50 years after the murders.

In 2001, Dr. Norman Lichtenfeld, the son of a 106th veteran, and the Langer children helped form the U.S. Wereth Memorial Fund to raise funds for a memorial. On May 23, 2004, a memorial to the “Wereth 11” was formally dedicated near the location of the massacre. It is dedicated to the 11 massacred soldiers as well as all African-American soldiers who fought in the European theater. It is believed to be the only memorial specifically dedicated to African-American soldiers of World War II in Europe.

Finally, in 2017, Congress passed a resolution bestowing “official recognition” on the victims of the massacre.

These are my 2018 photos at the memorial in Wereth, Belgium.. 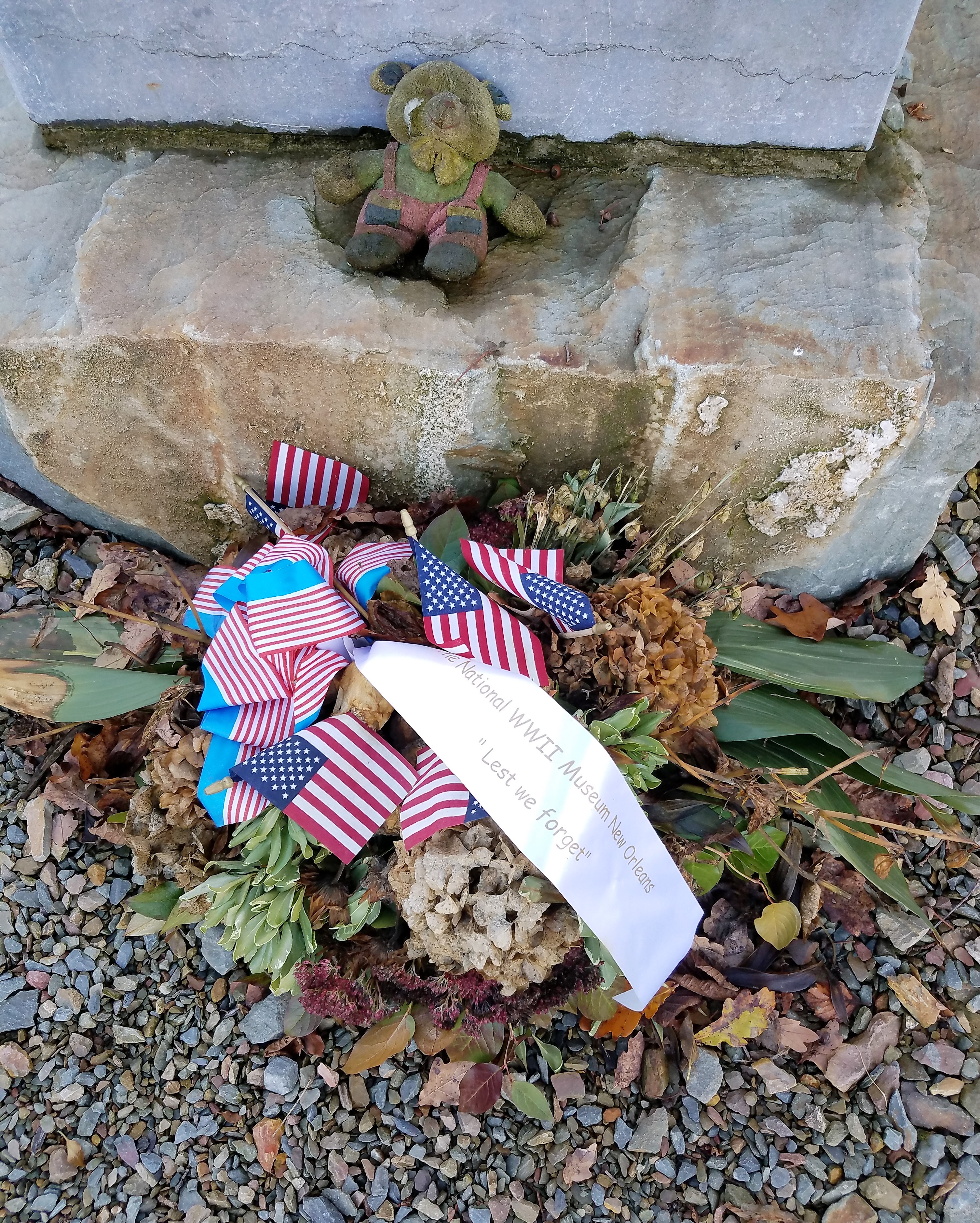 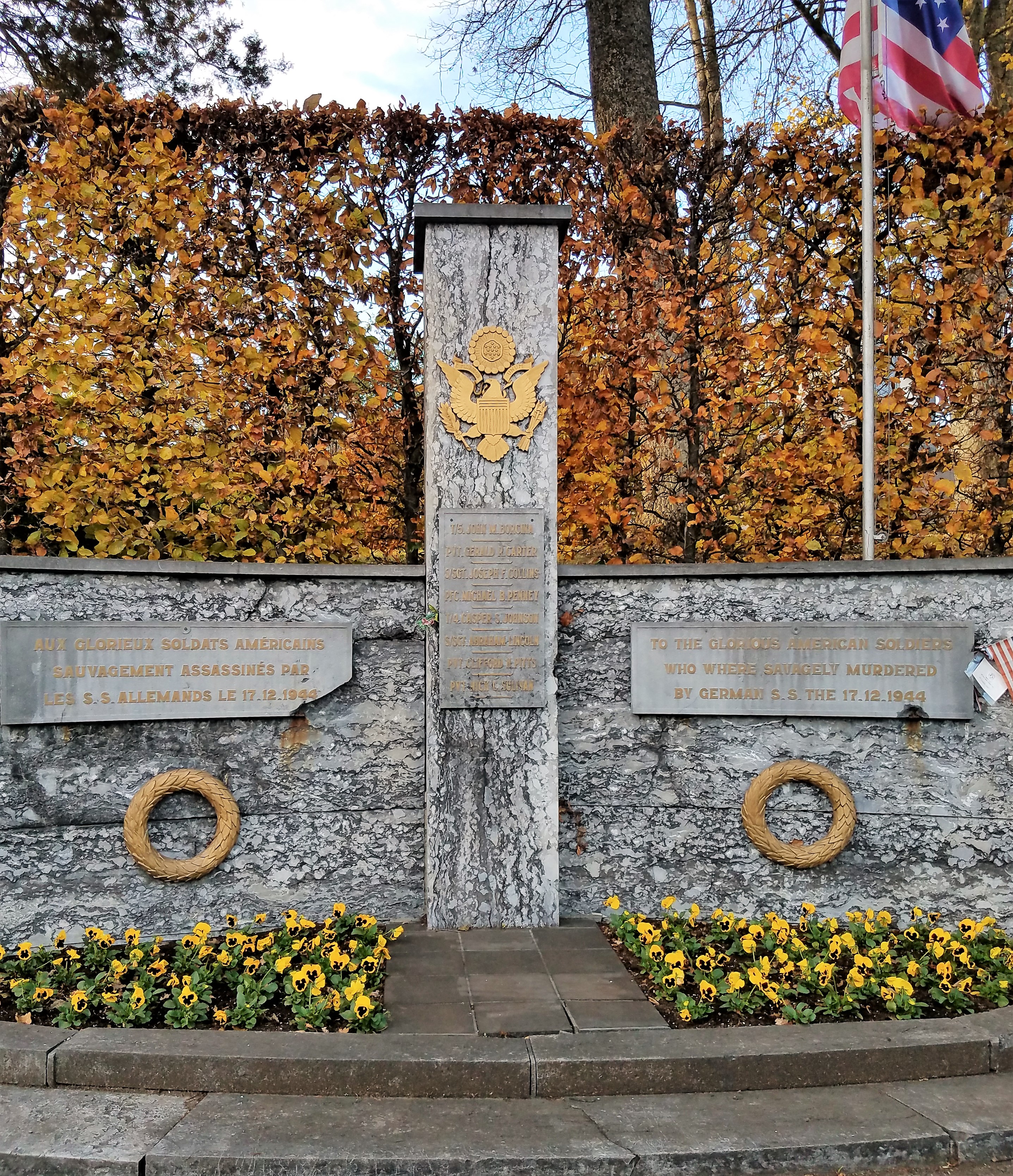 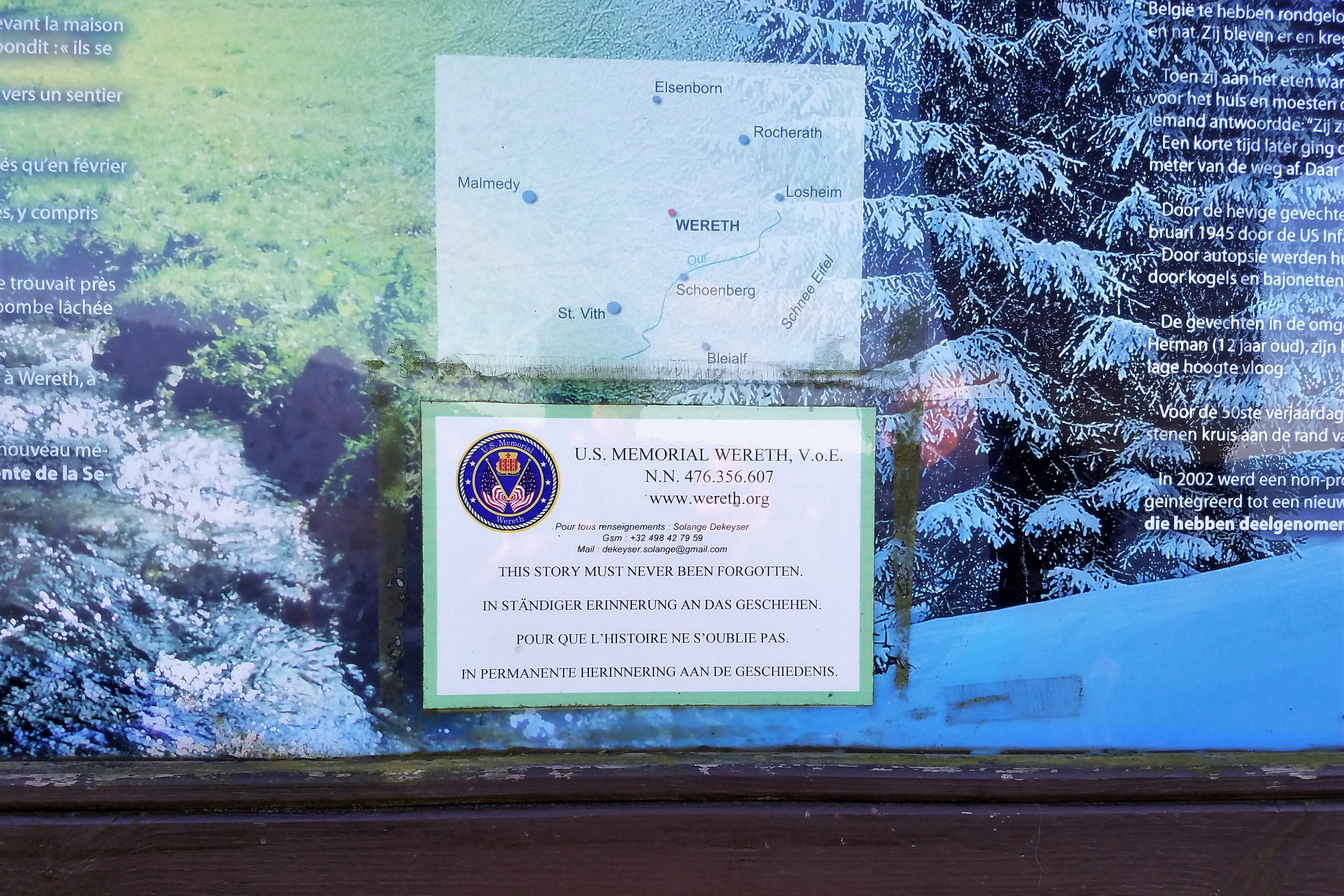 In 2006, members of the Worcester, Massachusetts, chapter of Veterans of the Battle of the Bulge dedicated what is probably the first memorial to the Wereth 11 on United States soil. It was dedicated at the Winchendon Veterans’ Memorial Cemetery on 20 August. In 2016, a memorial was erected in Miller Park, Bloomington, IL.

It is a shame that it took 60 years and a kick in the pants from U.S. and Belgium civilians to get proper recognition from the U.S. government for the sacrifice of African American soldiers for their country.

26 thoughts on “Historical Post, The Wereth 11 – Lest We Forget”