Of the four Kenyan national parks I visited in May 2022 Amboseli was the national park I was looking forward to most. That is because I backed out of an eight-day trek to the top of Mount Kilimanjaro at the last minute after coming down with a mild case of Covid in April. Covid interrupted my already shaky training routine and raised concerns about my overall physical fitness and ability to cope with the lower oxygen levels at altitude. In any event, visiting Amboseli and several other Kenyan national parks was a great Plan B.

Amboseli is a relatively small park that sits in the middle of a larger ecosystem on the border between Kenya and Tanzania. Amboseli encompasses a diversity of habitats such as swamps, dusty plains, lakes, and acacia forests. Amboseli is a Westernized perversion of the Maasai word for the region “Empusel”, which translates as “salty dust.” 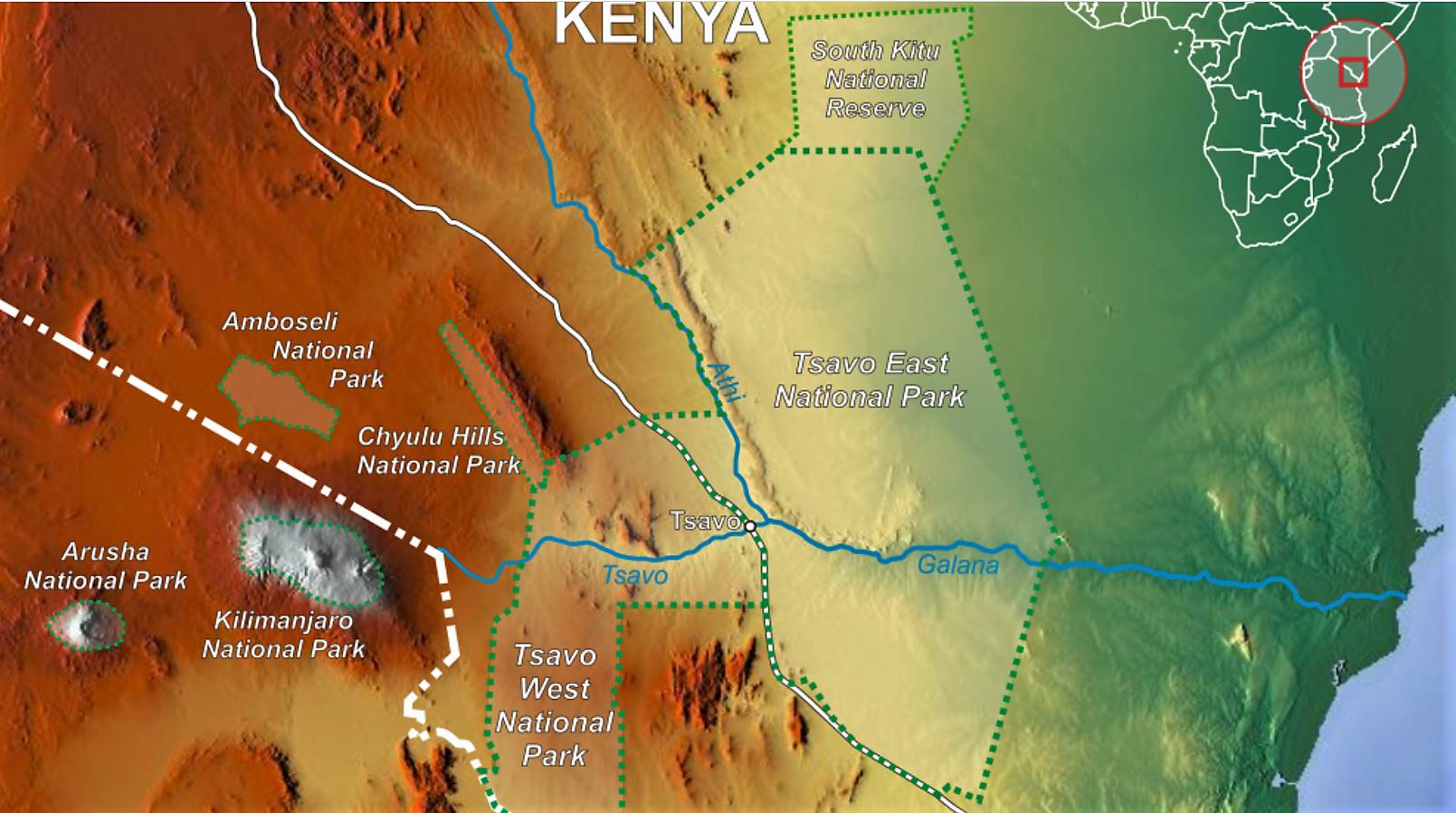 Amboseli is perhaps most renowned as the place with the best views of Mount Kilimanjaro, which lies just across the border in Tanzania. Kilimanjaro or “Kili”, as locals refer to it, was the primary reason I insisted on visiting. The peak is only 29 miles (44km) distant.

Mount Kilimanjaro (/ˌkɪlɪmənˈdʒɑːroʊ/) is a dormant volcano in Tanzania. It has three volcanic cones: Kibo, Mawenzi, and Shira. It is the highest mountain in Africa and the highest single free-standing mountain above sea level in the world: 5,895 metres (19,341 ft) above sea level and about 4,900 metres (16,100 ft) above its plateau base.   (Citations and links omitted.)

The mountain’s presence overshadows the whole place in more ways than one. A few of the many photos I took of Kili from the park: 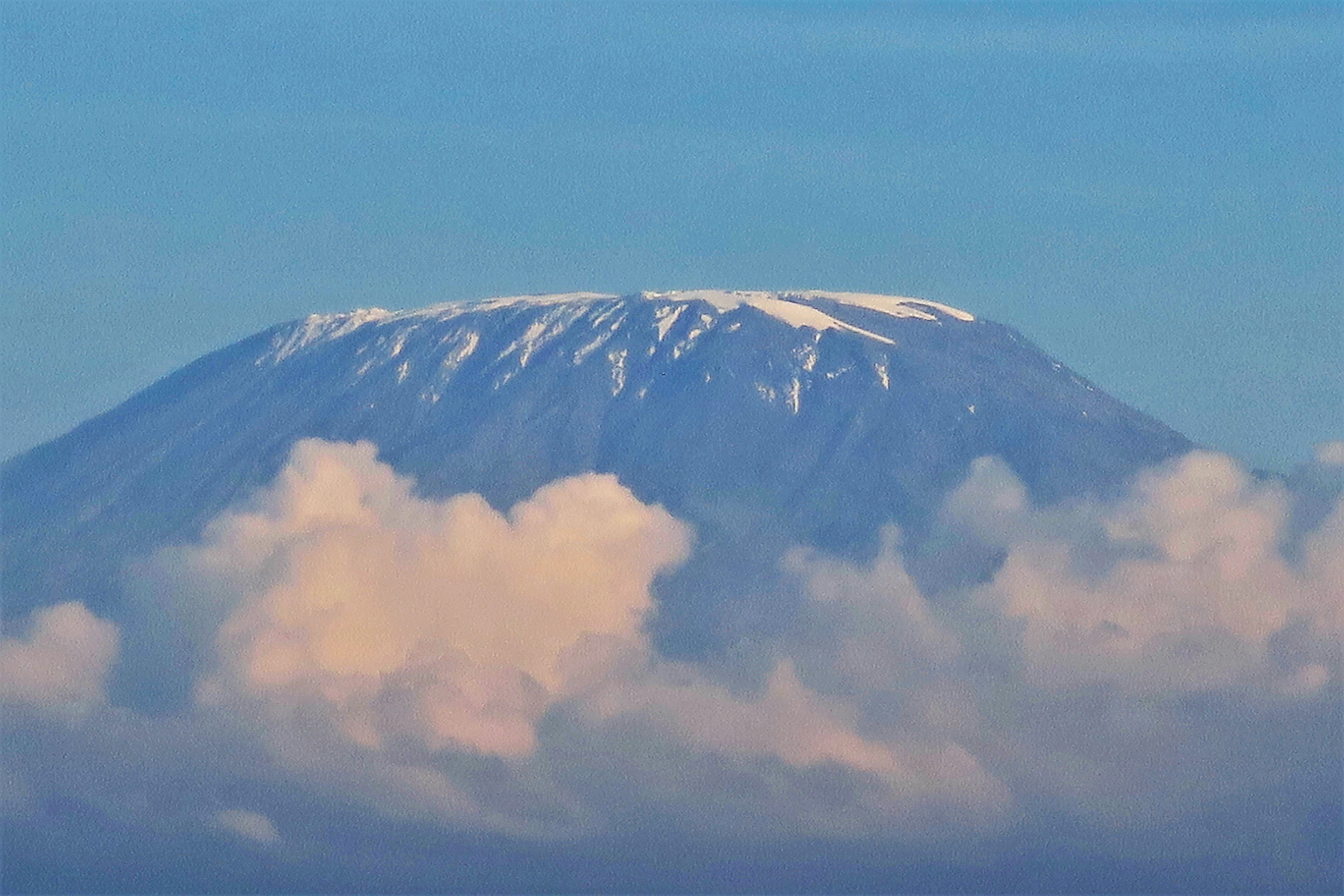 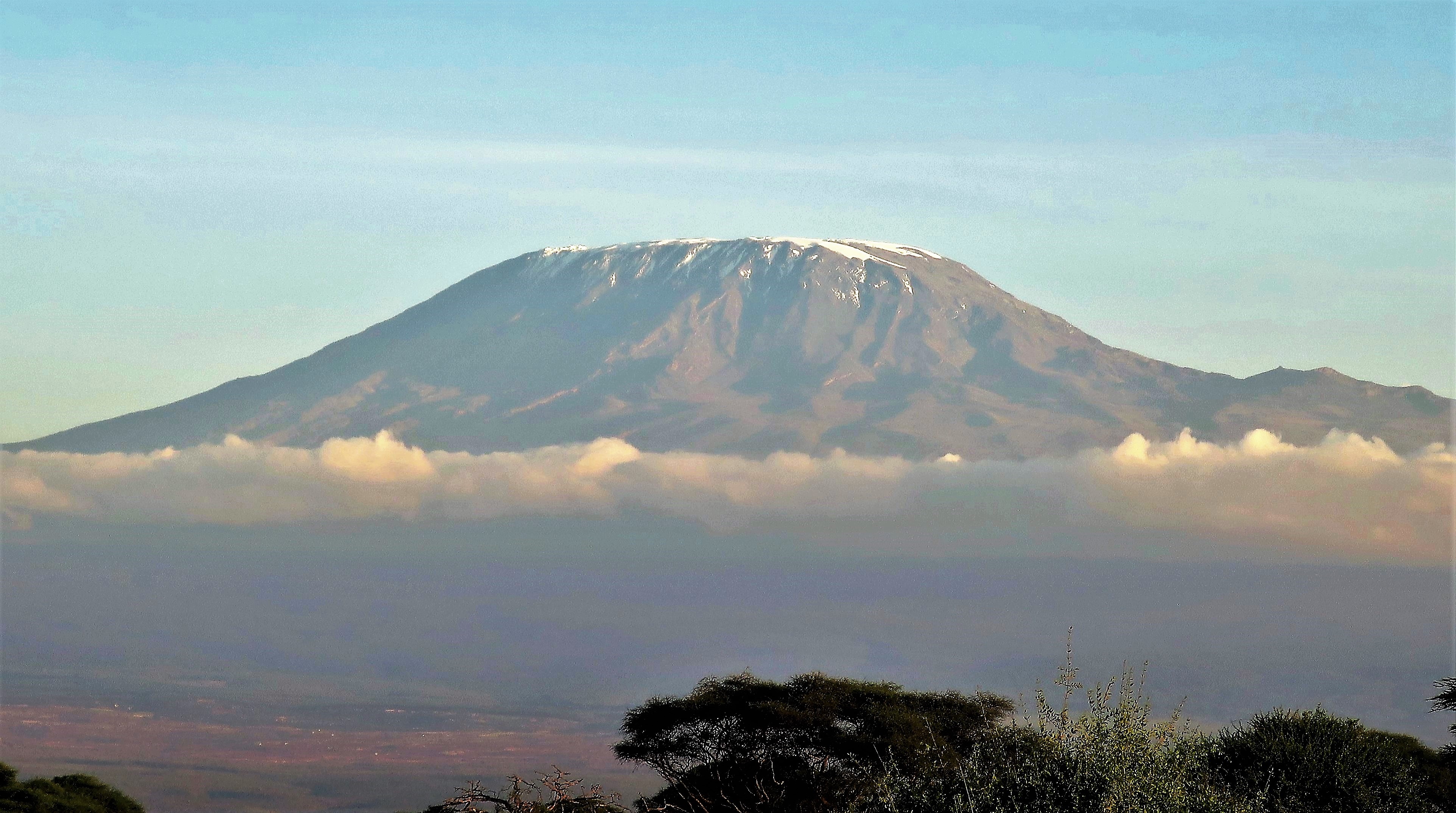 (The photographic record reveals that in the last 100 years, 80% of the Kilimanjaro snow cap has disappeared.  No one knows precisely how much longer the rest may be around.  In the early 2000s, it was famously predicted to vanish by about 2020.  That hasn’t happened.  This recent article is one of many about Kilimanjaro’s ice cap and takes a stab at explaining why it persists.)

Thanks to its towering neighbor, the Amboseli ecosystem is one of the most unique environments in Africa.  Wikipedia summarizes some of the pertinent facts pertaining to Amboseli National Park and its environs:

Amboseli National Park, formerly Maasai Amboseli Game Reserve, is a national park in Kajiado South Constituency in Kajiado County, Kenya. The park is 39,206 ha (392.06 km2) in size at the core of an 8,000 km2 (3,100 sq mi) ecosystem that spreads across the Kenya-Tanzania border. The local people are mainly Maasai, but people from other parts of the country have settled there attracted by the successful tourist-driven economy and intensive agriculture along the system of swamps that makes this low-rainfall area, average 350 mm (14 in), one of the best wildlife-viewing experiences in the world with 400 species of birds including water birds like pelicans, kingfishers, crakes, hamerkop and 47 raptor species.  (Citations and links omitted.  Emphasis added.)

Thanks to its towering neighbor, the Amboseli ecosystem is one of the most unique environments in Africa.

Amboseli is an oasis of plants and animals in the middle of a desert.  Underground streams flowing from the ice-cap on Kilimanjaro keep certain areas of the park well supplied with water, which in turn attracts waterfowl, a wide variety of grazing animals, and the predators that go with them.  Areas in the park that don’t receive Kilimanjaro’s waters are bone dry.

Following vehicle and balloon safaris in Maasai Mara National Reserve, Amboseli was a stark contrast in terms of the landscape.

In May at least, Mara landscapes are primarily lush savanna. 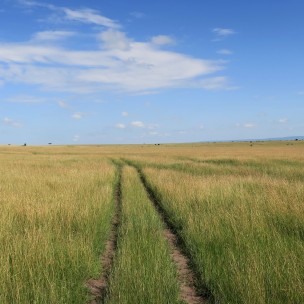 Large elephant herds are one of Amboseli’s prime attractions.  Over 1600 elephants  roam the ecosystem.  It is the most comprehensively studied Elephant population in the world.

In 1972, Cynthia Moss formally established the Amboseli Elephant Research Project (AERP).  The Amboseli Trust for Elephants (ATE) was created in 2000 to fund the research project.  Visit this site to make a contribution or adopt and follow an elephant for a year. 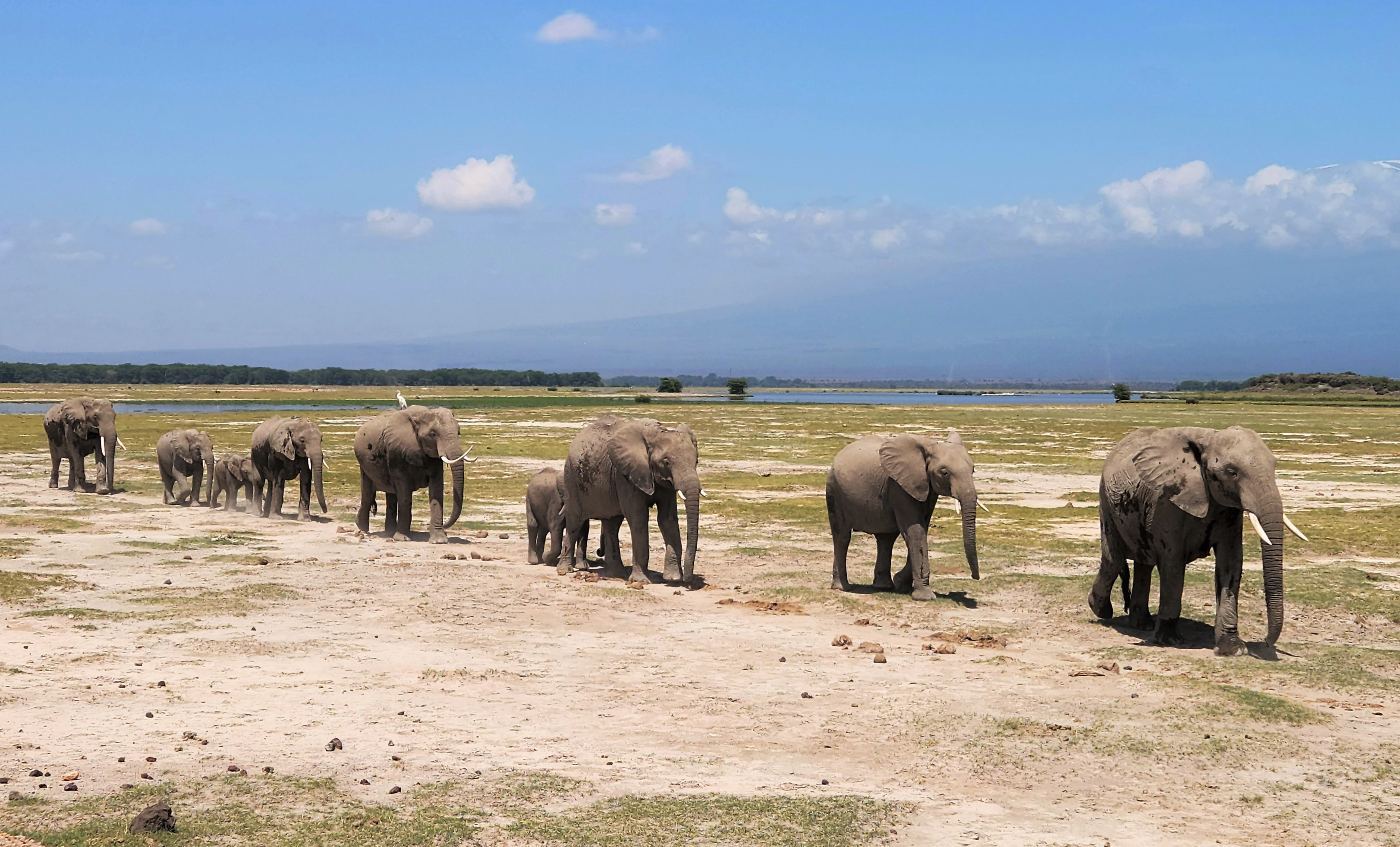 Kilimanjaro-fed springs create Lake Amboseli and numerous marshes and swamps that provide habitat for a wide variety of waterfowl and other animals. 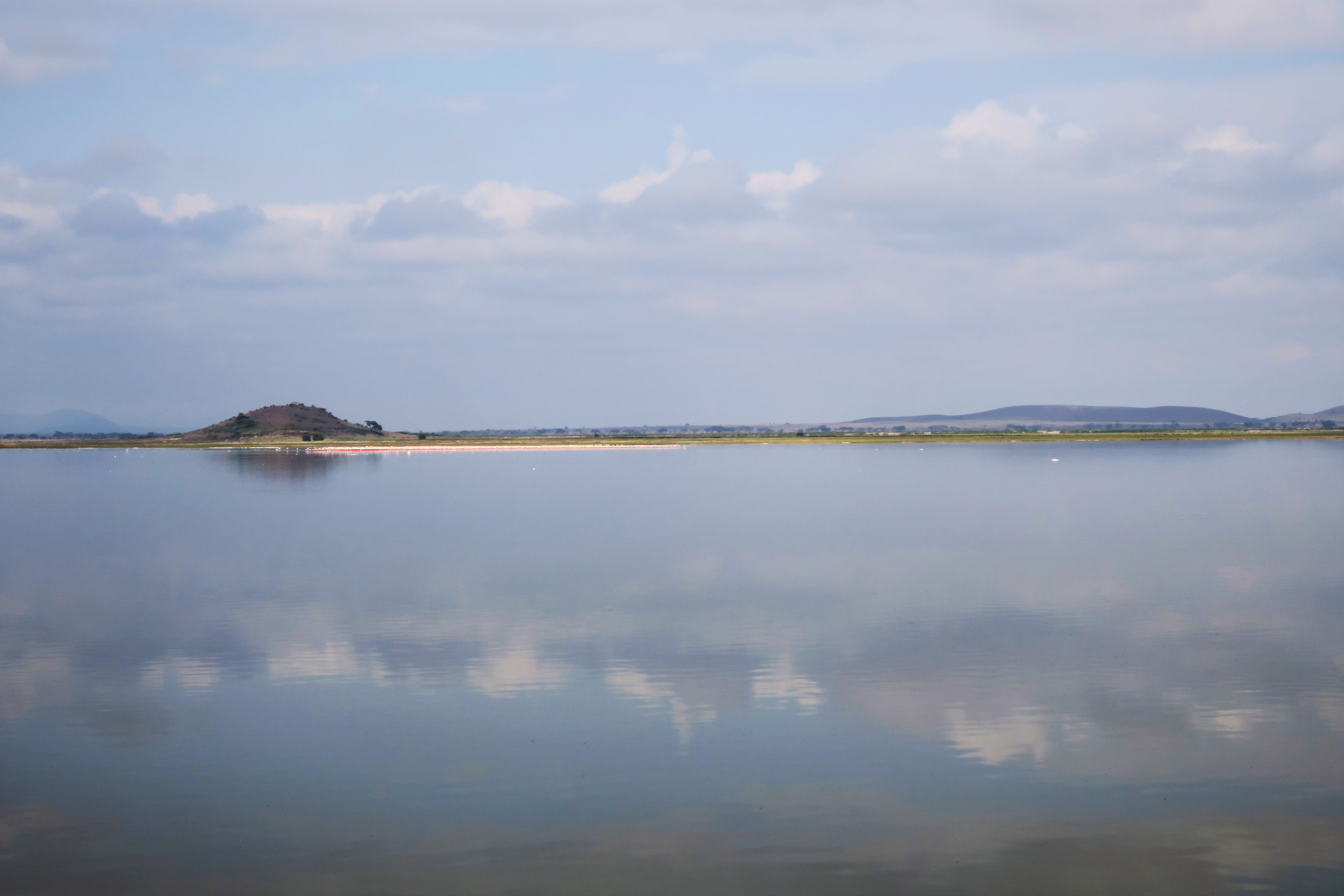 (Bird names are google images and my best guesses.  I don’t recall all of the identifications provided by guide and driver.  Corrections are welcome.)

Swamps and marshes are also feeding grounds for large mammals like elephants and hippos.

Zebras, wildebeests, ostriches and various types of antelopes were common. 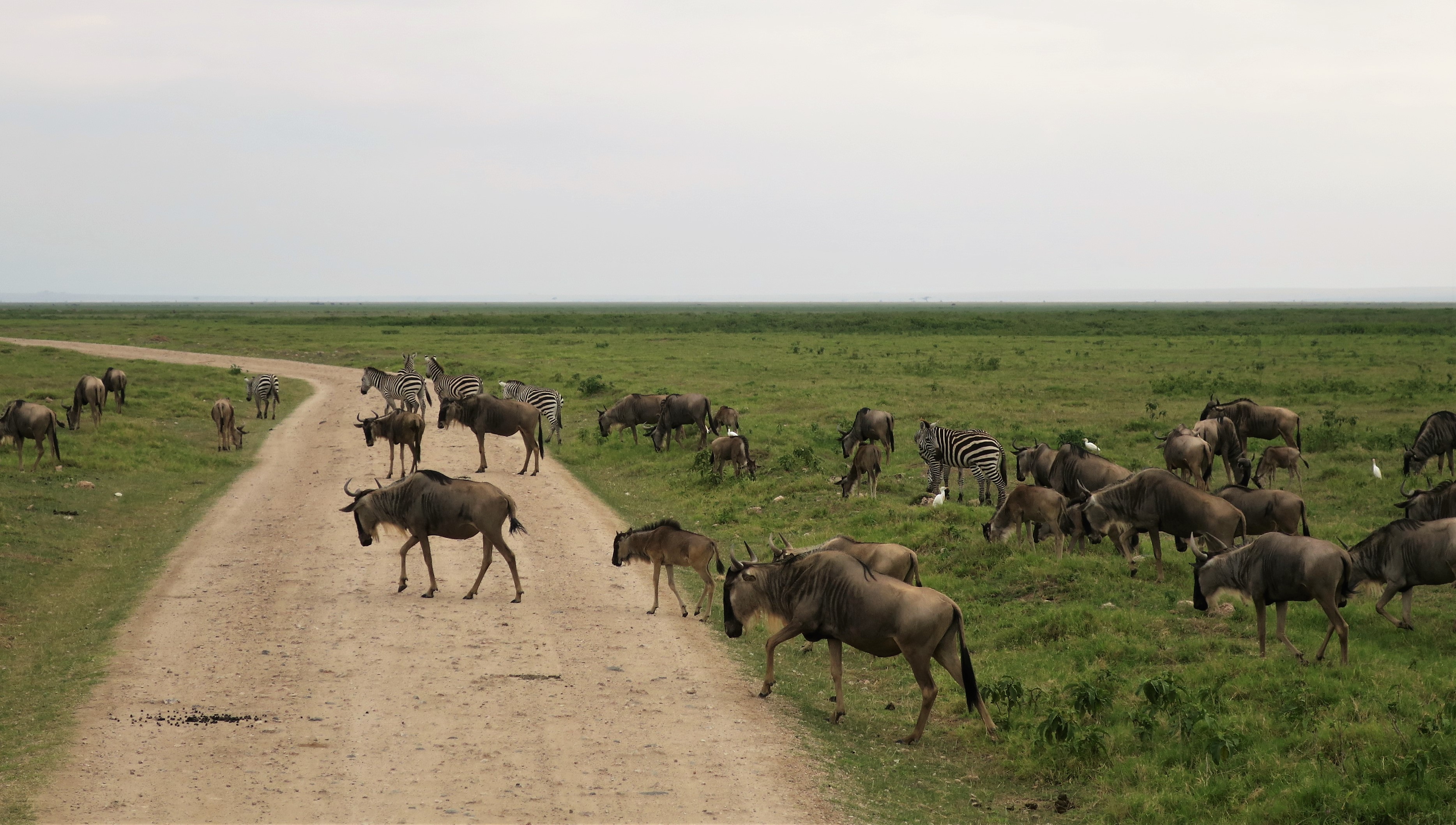 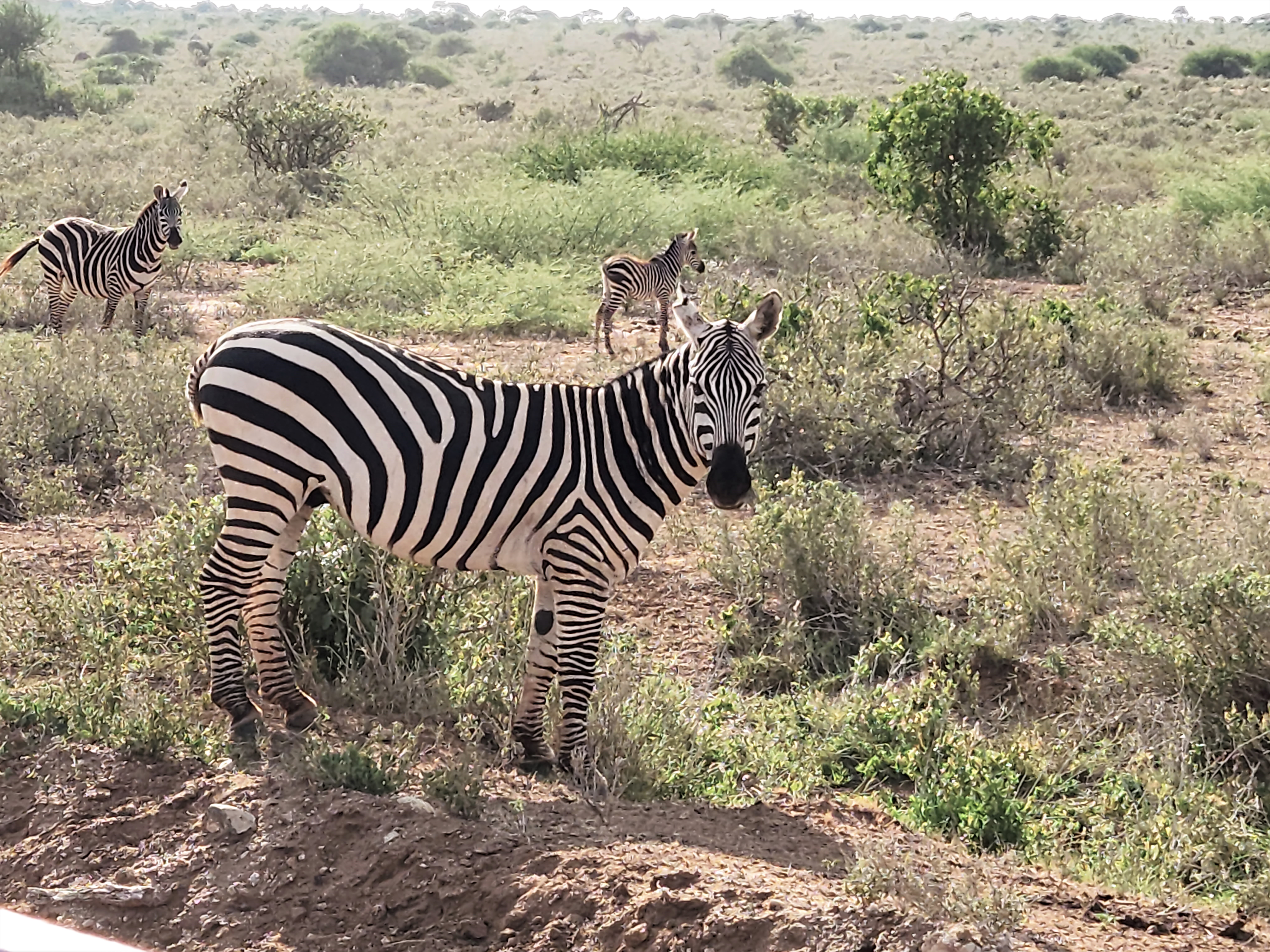 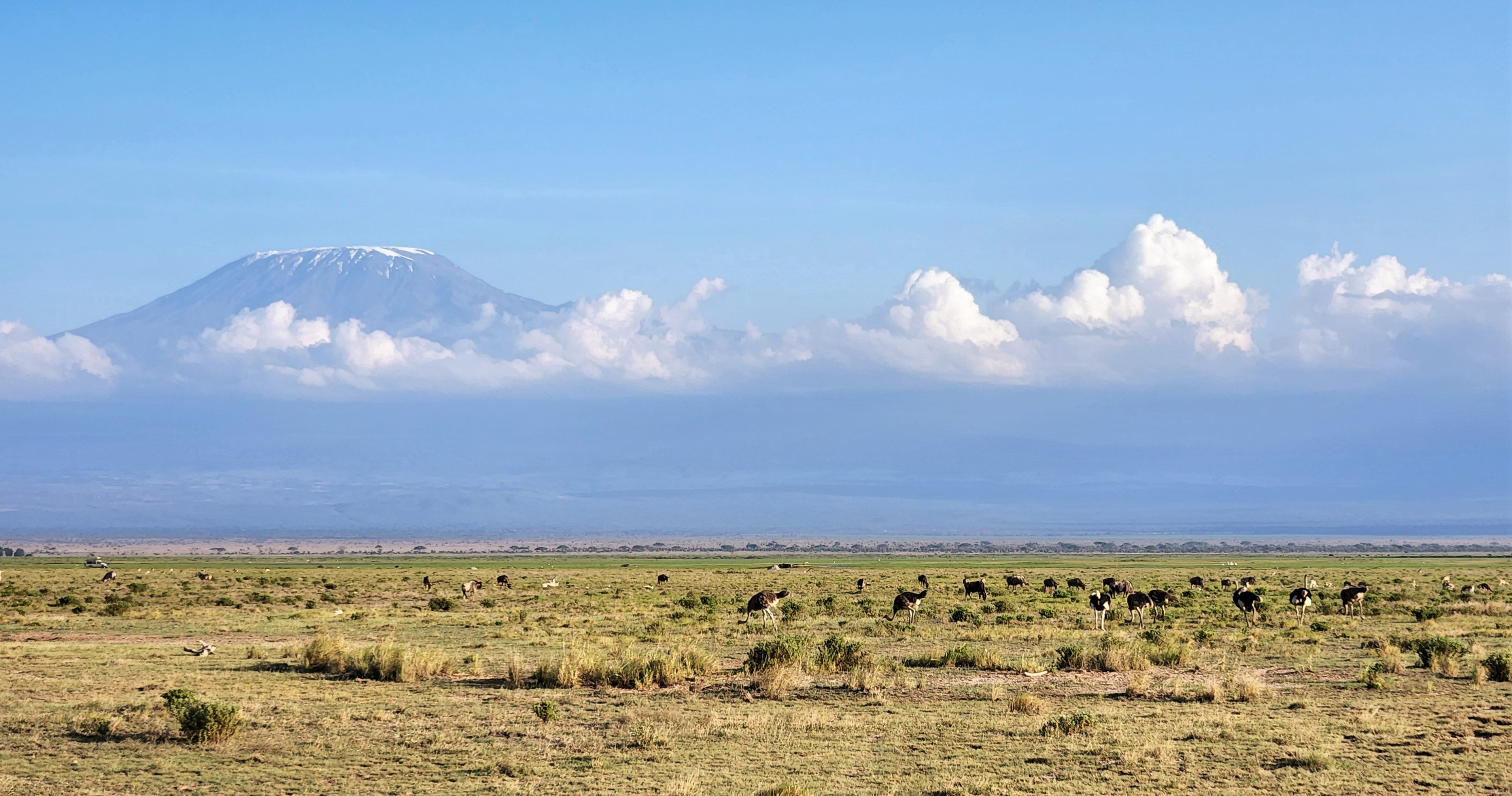 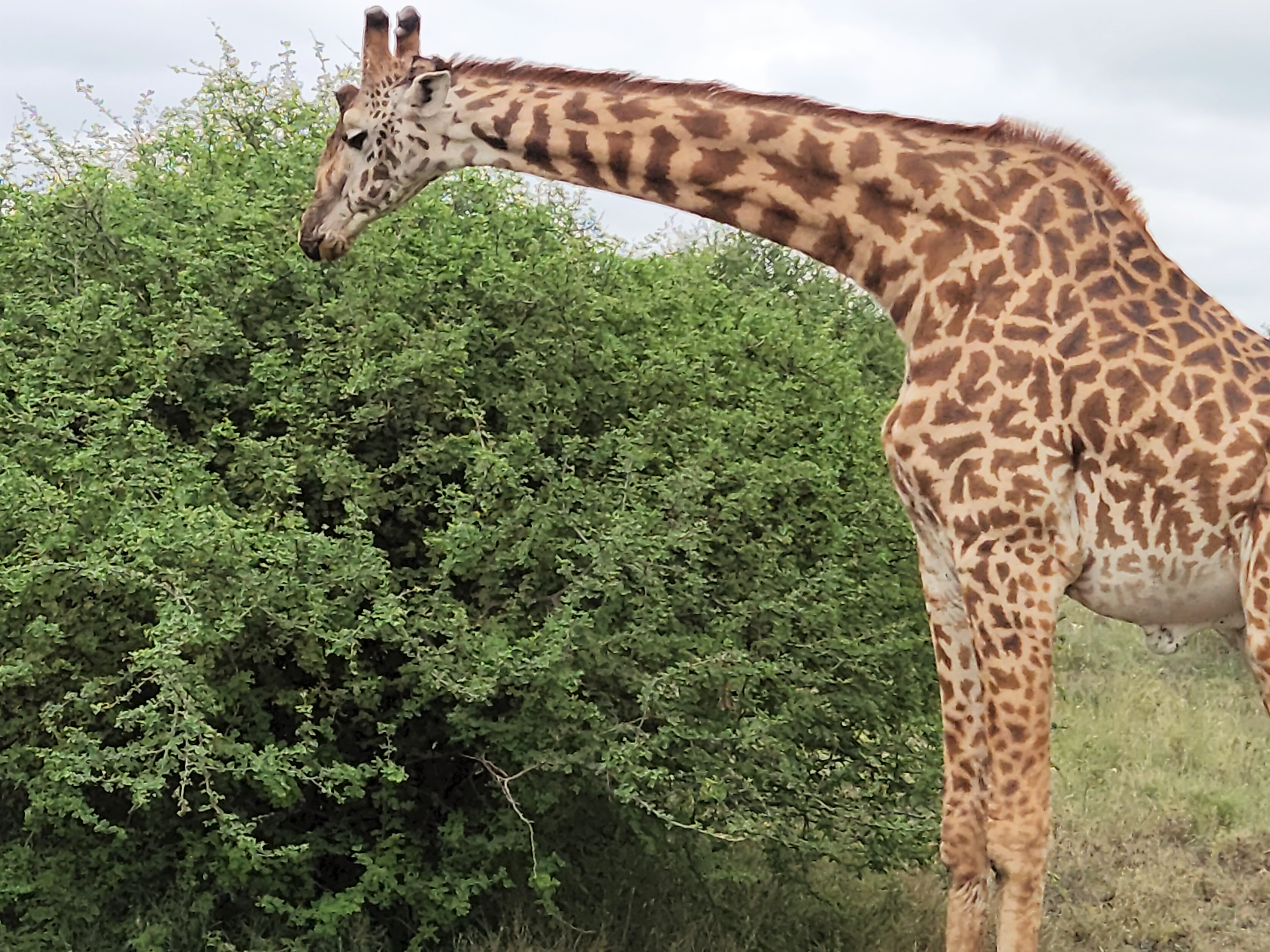 Tour guide Ezekiel Ouma took this photo several miles outside the park on the drive to Mombasa.

A large lion was hanging out in an area with tall grass.

Hyenas were abundant.  We often saw them lying in the mud along the roads.  At one point, guide Ezekiel Ouma believed we saw a hyena being eaten by other hyenas.  The hyenas were a good distance from the road.  It was hard to tell what they were eating. 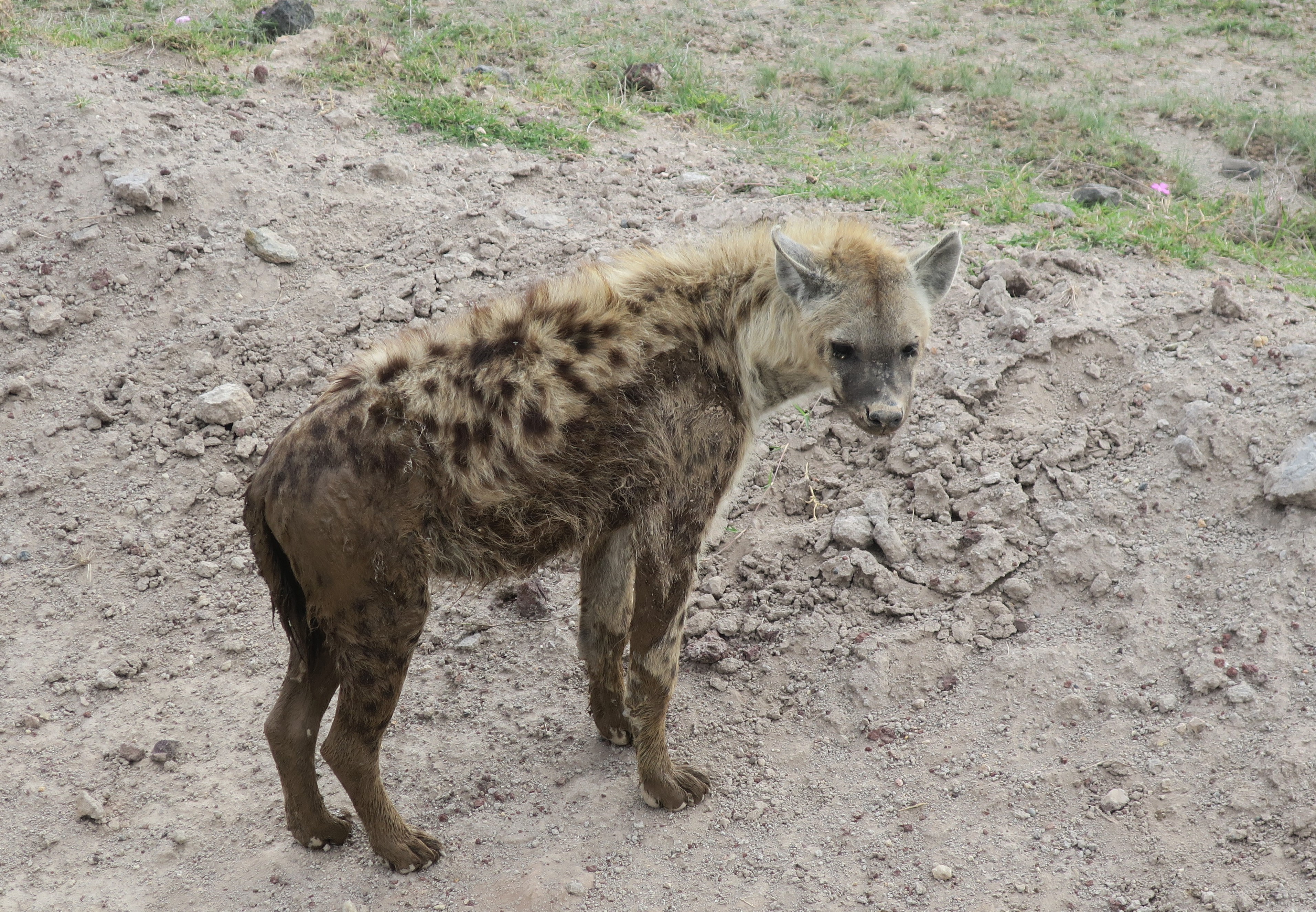 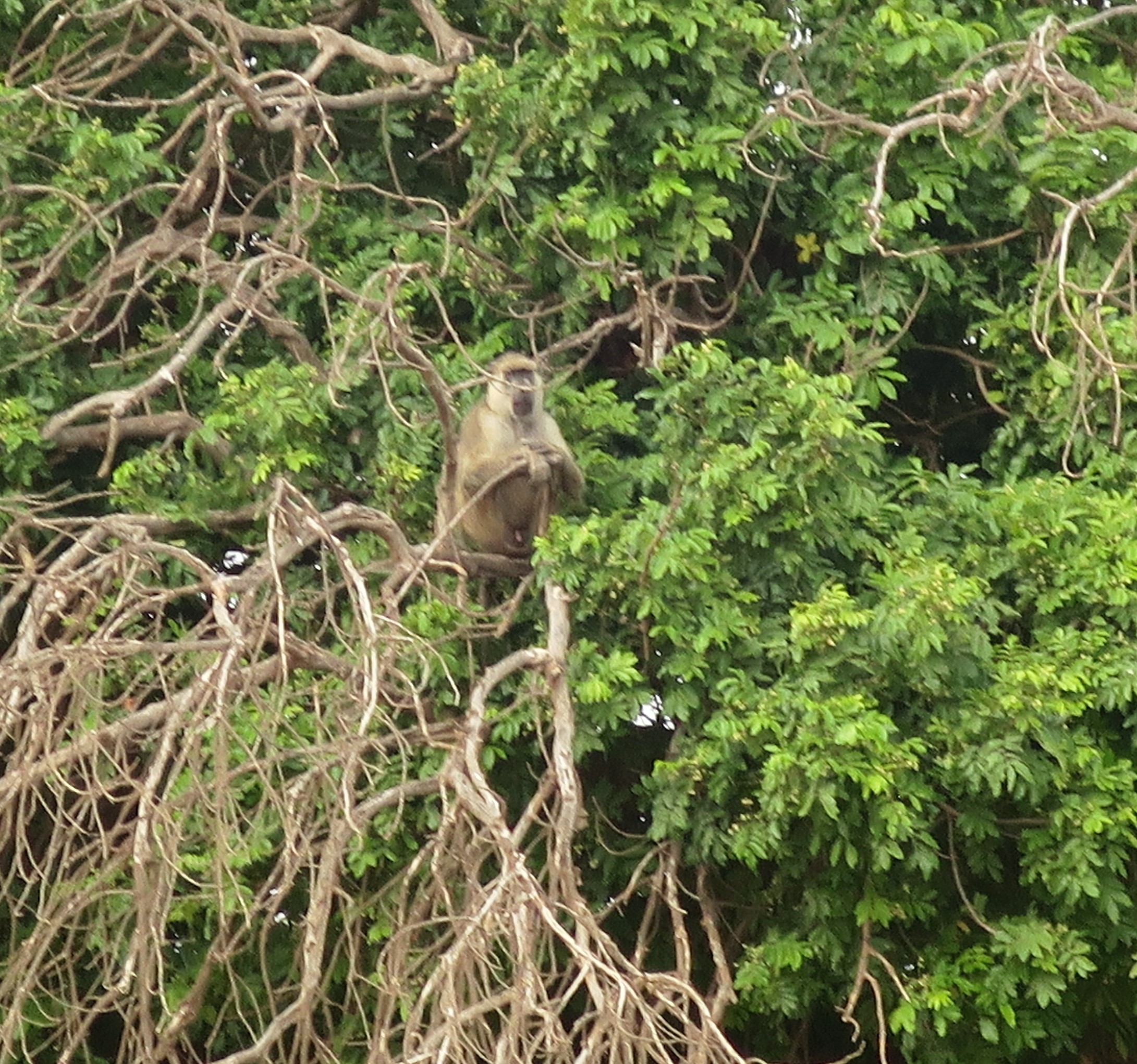 Observation hill is a small hill that provides panoramic vistas of the otherwise remarkably flat Amboseli landscape.  We stopped there for a box lunch on the full day safari. 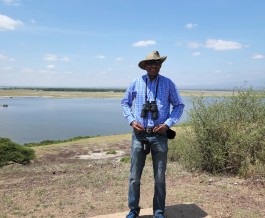 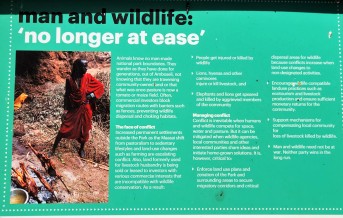 This is the only location in the park where visitors are allowed to get out of their vehicles.  There are picnic tables, interpretive signs and restrooms in addition to the views. 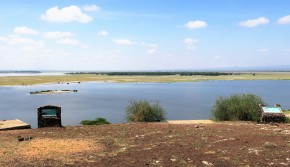 The dry season (June to October) when vegetation is sparse is the best time of year to visit. The park is open from 06:00 to 18:00 daily.

Getting to Amboseli is easy if you are part of a tour as most visitors are.  Getting to Kenya is usually the hard part.  The park is slightly less than four hours from Nairobi by car.  Our route was A104 to Namanga to C103.  Alternatively, A109 to C102 in Emali takes almost exactly the same time.  You won’t come across other roads — so no worries about getting lost.  It is possible to drive your own vehicle unguided in the park.  Scheduled air services operate from Nairobi, Masaai Mara, and Tsavo West.

Amboseli National Park is indeed Mount Kilimanjaro’s gift but is a park that also faces challenges. Spring-fed lakes, swamps and wetlands in close proximity to desert, scrub, and patches of acacia forest present an unusual array of micro habitats supporting a wide range of plants and animals. This environment spreads well beyond the boundaries of the unfenced park. Animals aren’t obliged to honor arbitrary restrictions like park boundaries. Conflicts with a growing human population must be managed.

Another looming issue is the icecap on Kilimanjaro. The article cited in the post asserts that climate change’s primary effect on the ice cap may be from altered precipitation patterns rather than global warming. Whatever the cause, a decrease in the flow of water from Kilimanjaro would certainly affect the environment in the park and surrounding areas.

Future issues aside, the Amboseli safaris and Kilimanjaro views were spectacular. I highly recommend visiting this park if you are in Kenya or Tanzania.

Thanks for visiting. It is good to be blogging again.