Yesterday’s post on The CNN Food & Drink Travel Quiz Answers included a couple of restaurant questions that piqued my interest in Michelin-starred restaurants.  I was somewhat surprised to learn you don’t need to pay hundreds of dollars to experience the best of the best.   In 2018, Traveloka published a ranking of the 50 cheapest Michelin starred restaurants worldwide.  There many highly rated restaurants where one can dine without needing to mortgage the farm.

Traveloka is an Indonesian unicorn company that provides airline ticketing and hotel booking services.  To compile the list, Traveloka used the official Michelin website for each country to find the cheapest one and two-star restaurants. It then ranked them by the price of an individual meal, whether it was an the cheapest main à la carte dish available or a set menu.

Asia claims the most low-priced Michelin dining options, and Europe is also well represented followed by the US and Brazil.  Without further ado, here is Traveloka’s list. 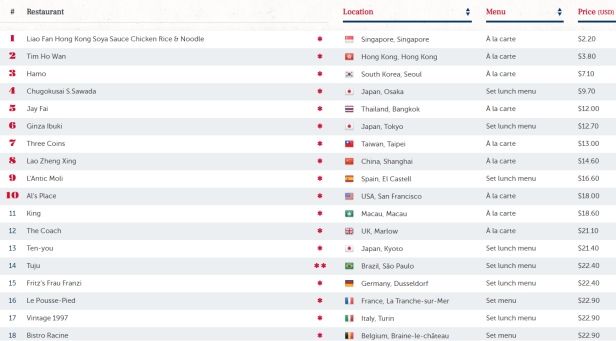 Liao Fan Hong Kong Soya Sauce Chicken Rice & Noodle is ranked as the cheapest starred meal.  A Michelin star was awarded to the restaurant’s original location in a hawker food court in Singapore. 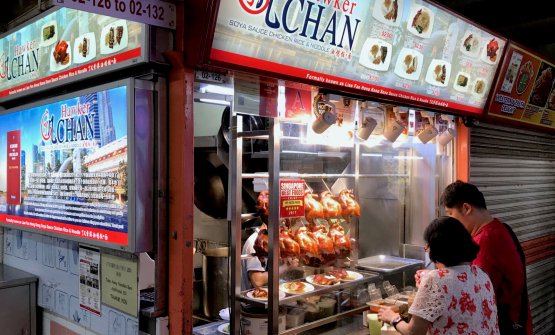 Rebranded as Hawker Chan, you can now enjoy the same food at four locations in Singapore and 12 additional locations in Taiwan, Thailand, the Philippines, Malaysia, Kazakhstan, and Australia.  Update:  Hawker Chan lost its star in the 2021 ratings.  I seems the expansion may have come at the expense of quality.

It is interesting that a tire company, Michelin, is in the business of rating restaurants.  This anomaly stems from the early 1900s when Michelin published a restaurant and hotel guide as an effort to increase tire sales by stimulating auto purchases and touring.

Michelin awards 1 to 3 stars on the basis of the anonymous reviews. Michelin’s  reviewers concentrate on the quality, mastery of technique, personality of the chef, value of the food and consistency, in making the reviews. They do not look at the interior decor, table setting, or service quality in awarding stars, though the guide describes how fancy or casual a restaurant may be.

A few years ago I tried Nahm in Bangkok, Thailand.  Nahm received a Michelin star for the third consecutive year in 2020.  It is one of the cheaper Michelin-starred restaurants although it did not make the top 50 list.

Nahm launched in 2010 with a menu influenced by traditional Thai haute cuisine and the street food of Bangkok.  In 2014, Nahm was voted No.1 in Asia’s 50 Best Restaurants.

I made a lunch reservation to keep the price reasonable.  Lunch menus are always less expensive.  The meal was fantastic and cost under $40 all in even though I did not stick with the cheapest choices.  The photos are from the restaurant website and are not the dishes I tried.

I am always on the lookout for great food at reasonable prices.  I plan to keep the list of inexpensive Michelin-starred restaurants close at hand for reference during future travel.

Have tried or plan to try any of the restaurants on the list?