I amassed over 250,000 Elite Qualifying Miles on American and, thanks to rollover MQMs ended the year with more than 460,000 Medallion Qualifying Miles on Delta.  Therefore I easily requalified for American Executive Platinum and Delta Diamond status for 2017.  Best of all, I earned an additional 8 systemwide upgrades on American and four global upgrades on Delta.  Those will be put to good use in 2017.

My international flight map for 2016:

Last year I flew some airlines for the first time and tried a few new products on others. 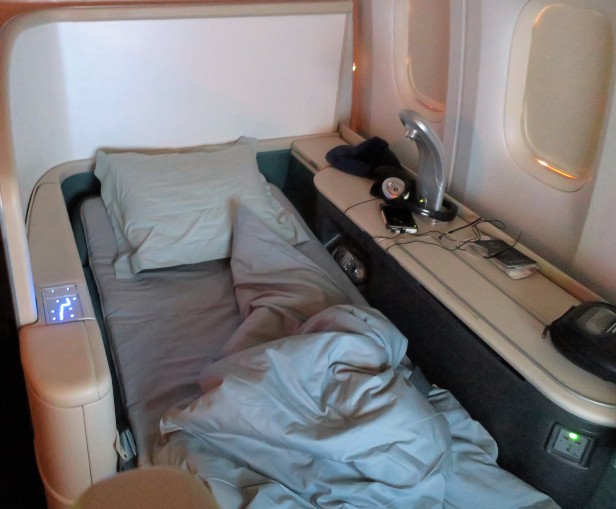 On the opposite end of the luxury spectrum from Ethiad and Korean Air first class, I also enjoyed my first experiences with two small airlines.

Although the plan for a helicopter flight to Everest Base Camp fell through, I got a reasonably close up look at Chomolungma (Goddess Mother in Tibetan) or Sagarmatha (Nepalese) via a sightseeing flight out of Kathmandu, Nepal on Yeti Airlines. 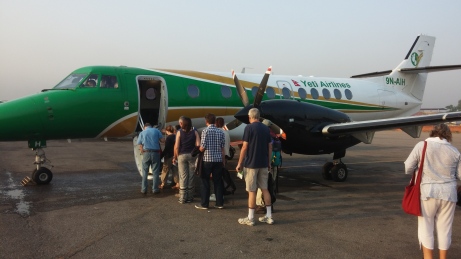 As far as new products, I flew several flights on which the airline was introducing new aircraft models into service.  The nicest of these flights was on a fairly recently introduced Qatar Airways A350-900 from Philadelphia to Doha, Qatar.

In October, I was in business class Dallas to Los Angeles on the first flight of an American Airlines 787-900.

The American 787-900 is the first time a US airline has employed an aircraft with international level premium economy seats.

Flying some of the tried and true products was also worth it.

Not all flights were in premium cabins.  Japan Airlines had the best long haul economy seats.

Although I have not been impressed with the service from the ground staff of China Eastern Airlines, it has protected me in economy in 2016 by always having at least one empty seat beside me.

China Eastern is also the only airline I’ve flown that offers paid upgrades on the in-flight entertainment system.  Of course, the prices are ridiculous.

In 2017, I will leverage the top-tier status earned in 2016 in the OneWorld and SkyTeam alliances to enjoy and report on additional travel experiences.