I purchased a coach ticket to Singapore from Charlotte, NC to attend the 2017 Singapore Latin Dance Festival.  As an Executive Platinum (EXP) in American Airlines’ (AA) frequent flyer program, I requested an upgrade to business class to HKG using a Systemwide upgrade (SWU).  The SWU had not cleared when I left Charlotte.

Arriving at DFW, I rechecked the upgrade list and was #9.  No surprise as I had tried using SWUs on this route three other times and was batting .000.  I was content with seat 19D, an aisle seat in Main Cabin Extra (MCE).  MCE on an American 777-300 is a private, four-row cabin with a 3-3-3 seating.  The seats are 18 inches wide and have 34 inches of pitch.  I consider it Premium Economy lite.

Arriving on the C Concourse, I took the tram to Concourse D.  Departure to HKG was from Gate D27.  I wanted to hit a lounge before the flight for a little food and drink since upgrade chances seemed bleak.  To take advantage of my new Amex Platinum card, I visited the American Express Centurion Lounge near Gate 17.  The food and beverages are better than general Admirals Club fare.

I probably would have been better off in the D23 Admirals Club because American gives Executive Platinums two free premium drinks and access to the First Class Dining area (buffet) when they are flying long haul international routes even in economy.

I lingered in the Centurion Lounge and made one last check on the American app before going to the gate.  I was astounded to see that I had been upgraded to business class!

I hustled to D27 and got there as they were paging me for last call.

The flight from DFW to HKG, American Flight 125, was scheduled to take 16 hours and 15 minutes to cover a little over 8,200 miles on a great-circle route up over Canada and Alaska and then down over Russia, Mongolia and China.  I was glad to have the upgrade to business class for this long flight.

My seat, 12G, was a center seat on the starboard aisle.  I prefer the a window seat or one in the smaller forward section of business class but wasn’t complaining.  I’ve flown in that cabin domestically on American and on China Eastern internationally. 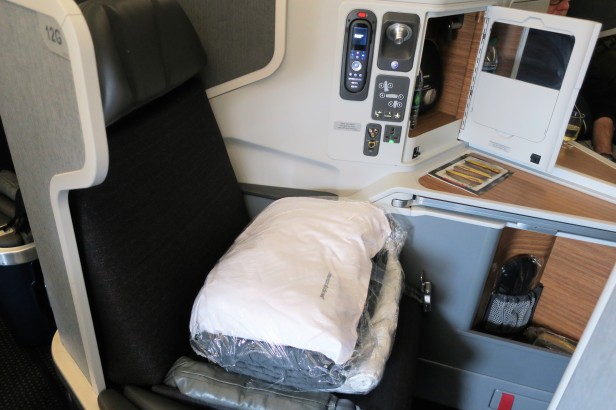 Seat Guru says this seat has 43 inches of pitch, a bed length of 75-78 inches and 26 inches of width.  The seat was very comfortable although it did not feel like it was 26 inches wide. The seat has decent storage for business class.

Open storage compartment near your knees 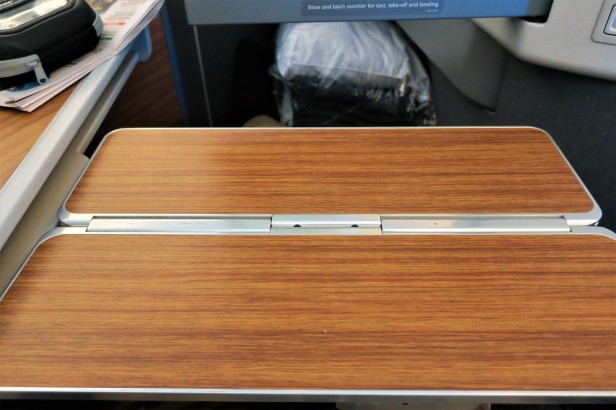 American provides a full complement of business class amenities on the 777-300.

A mattress pad is new for American in business class.

The amenity kit comes with eye shades, dental kit, headphone covers, pen, socks, tissues and a coupon for $100 off a Cole Haan purchase of $300 or more.  There is also a C. O. Bigelow travel kit containing mouthwash, body lotion and lip balm. 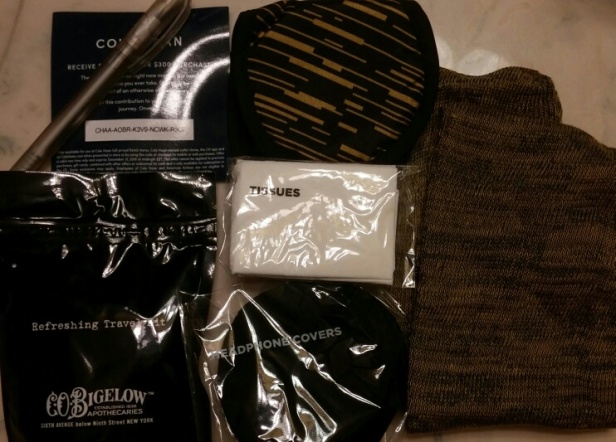 American also provides pajamas upon request.  This is an amenity that is becoming more prevalent on long haul international flights. 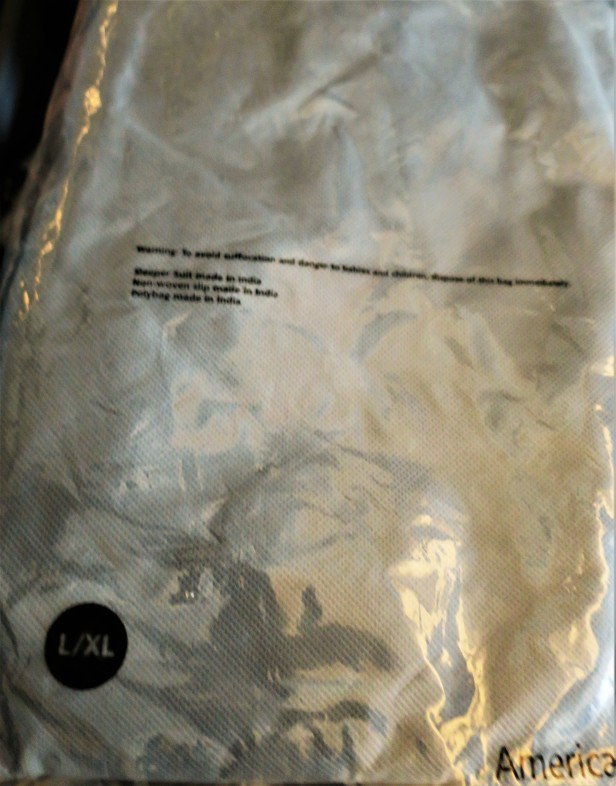 I was late boarding so the flight attendants had completed the pre-departure beverage service when I arrived.  I was still able to get a glass of champagne before we left the gate at 10:40.

The menu was on the console beside the seat when I sat down. 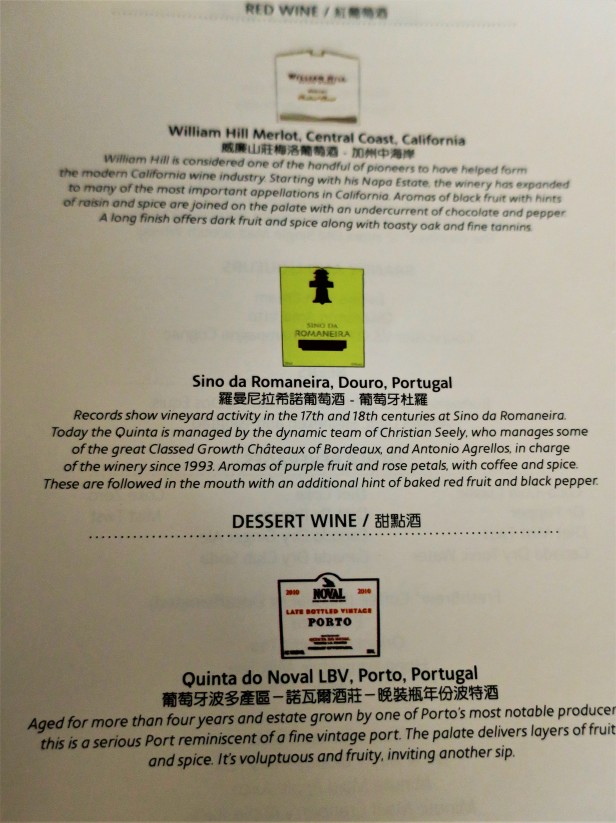 The menus for dinner, mid-flight snack and brunch: 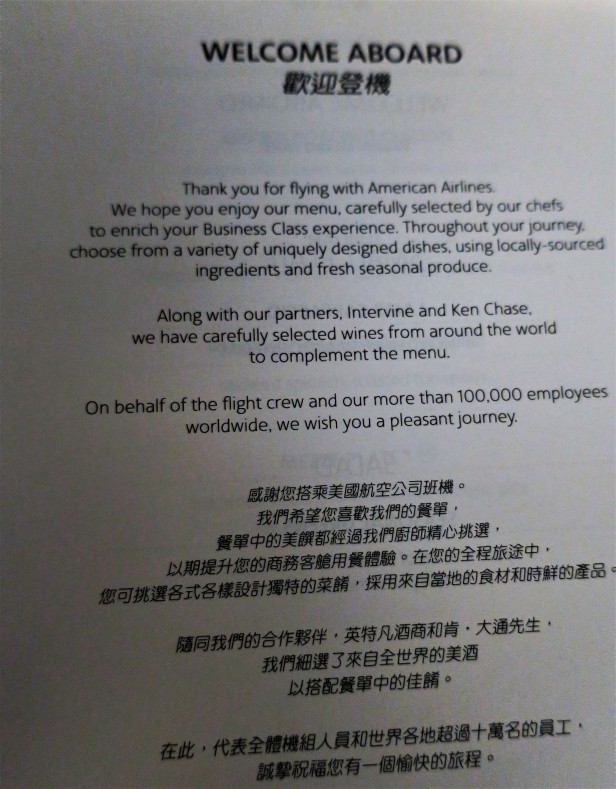 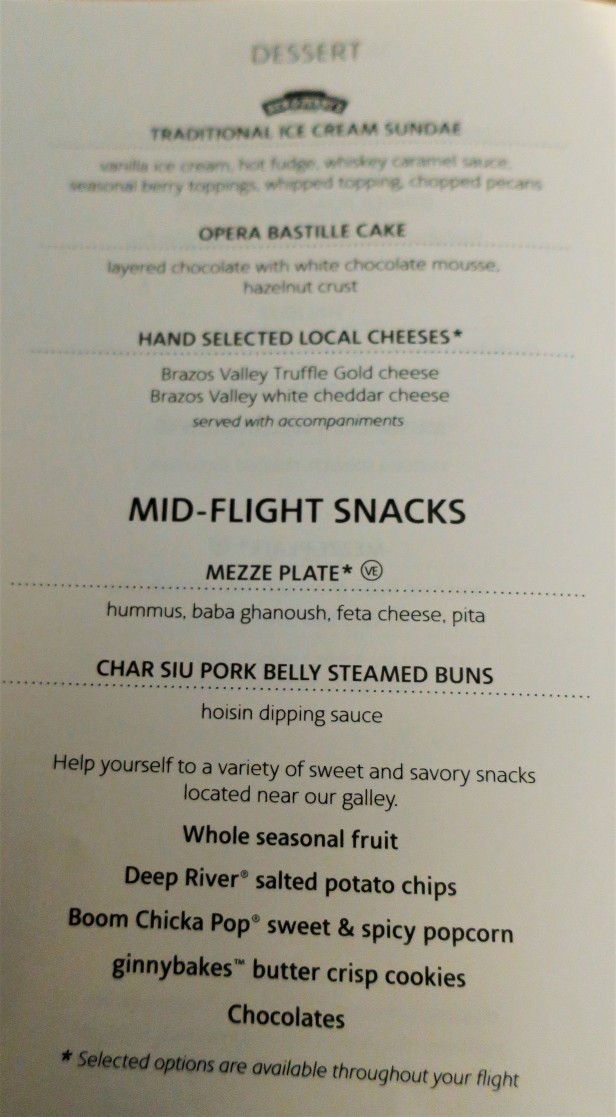 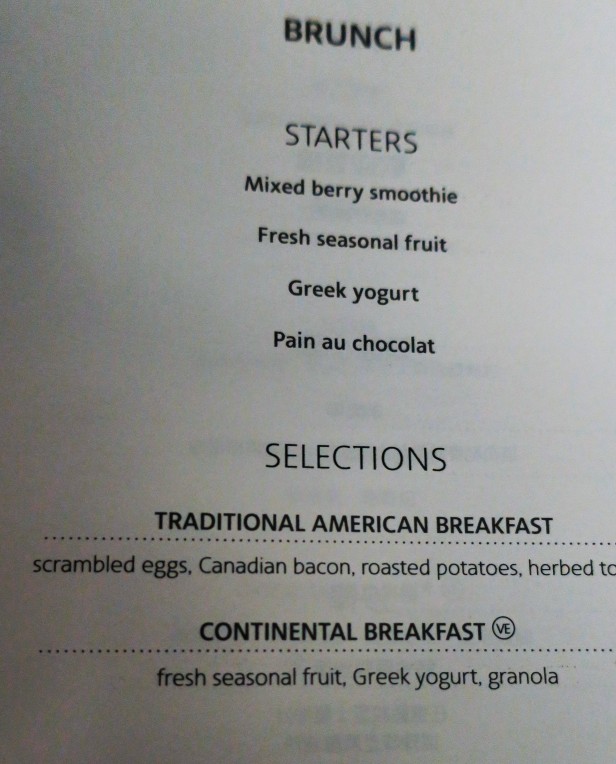 About one hour after takeoff and reaching the initial cruise altitude of 30,000 feet, the dinner service began with American’s traditional warm nuts and drinks.

Drinks were soon followed by the meal service. After the lamb carpaccio and salad, the FAs delivered the entree.  I selected the beef filet entree with lobster mac & cheese and carrots.

I love American’s lobster mac & cheese.   The filet was cooked with a warm pink center.  Lately, American has been doing a great job of not overcooking beef. 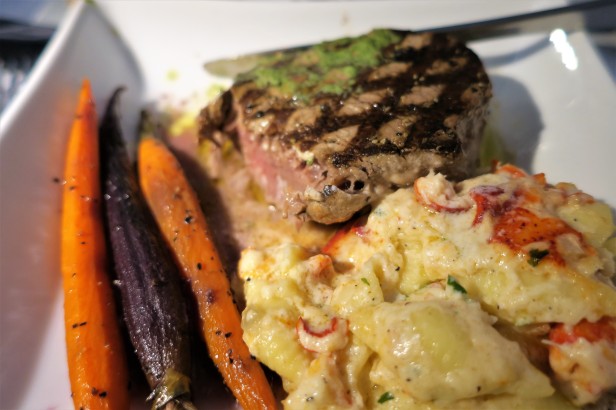 Desert was the traditional ice cream sundae with a little fruit, cheese and port.

There is also a help-yourself option.  Light snacks are set up in the galley between the two business class sections.  Whenever the urge arises, passengers can wander in and select what they want.

American has a wide selection of snacks and does an outstanding job of presenting them.   The quantity, quality and presentation is unmatched.

Brunch was served about one hour before landing in Hong Kong.  I had the American breakfast with apple juice and coffee.

The seat reclines to a full flat position.  It is wide and long enough to make sleeping well possible.  I’ve often complained that giving pajamas is nice, but a business class seat is too hard to get a good rest. Someone must have heard me because American had a mattress for business class!

Unfortunately, the mattress was too thin.  Still, it provide some much appreciated padding.  I give American kudos for making the effort.

The bathrooms at the front of the business class cabin were much nicer than the ones at the rear.  I assume American believed that economy passengers would sneak into the lavatories at the rear of the section. 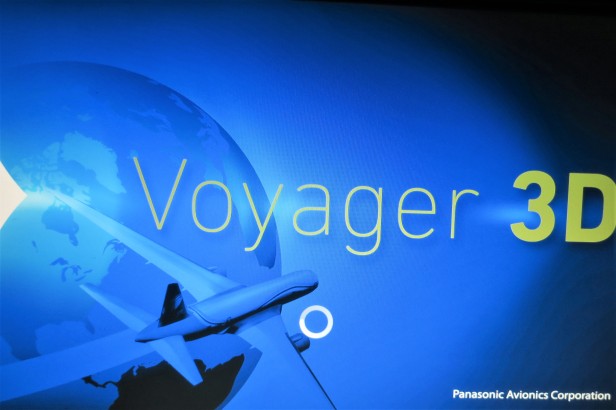 The 777-300 uses the Voyager 3D a/v system from Panasonic.  This is a very versatile system with lots of features.

It has the latest flight following information and displays.  I always get a kick out of the cockpit view on heads up display. 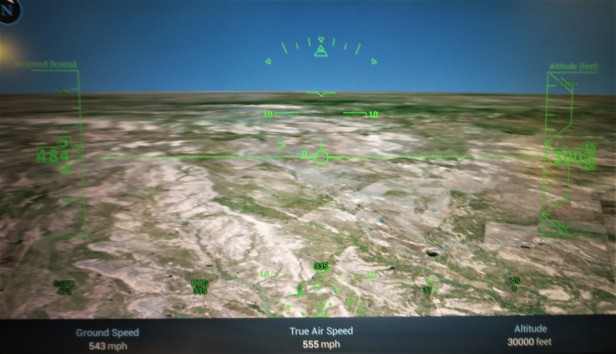 To help passengers keep tabs on their whereabouts, there are several video screens hanging from the ceiling that autoplay the airshow throughout the flight.

The a/v system, of course, has all of the latest movies from around the world and classics as well.  There are TV shows and live TV.  As a news junkie, I like to keep up with what’s happening, and live TV is the best way.

The system also has usb connectivity.  You can plug in your phone and have items displayed on the a/v screen.

I took a look at photos from my phone.

Our scheduled arrival time at Hong Kong was 5:35 p.m. and we touched down at 5:24pm after a wonderful 16-hour flight.