I took a detour from a trip to Tokyo to swing down to Okinawa to visit my nephew who was based there with III MEF (Third U.S. Marine Expeditionary Force).  He has been on Okinawa for almost three years.  On his day off, he gave me a tour of Naha, the capital of Okinawa Prefecture, and other sites in the southern part of the island.

Being a WWII buff, I asked to include sites related to the Battle of Okinawa.  Evan knew his way around Okinawa.  In the one-day tour, we were able to visit Shuri Castle and Hacksaw Ridge and the former Japanese Underground Naval Headquarters and Museum in addition to Naha.

Other posts from a fantastic trip to Japan where, among other adventures, I experienced ANA first class on a 777-300ER, stayed at the Ritz Carlton Tokyo, visited Mt. Fuji, and had my first encounter with sakura season:

The Battle of Okinawa

The Battle of Okinawa, April 1, 1945 to June 23, 1945 was the largest land engagement of the Pacific Theater and the last major battle of WWII.  Okinawa is an island of 466 square miles in the Ryuku Islands about 966 miles south of Tokyo, Japan.  The U.S. Fifth fleet landed more than 180,000 soldiers and Marines on the island to dislodge more than 130,000 soldiers of the Japanese 32nd Army who were dug in and waiting in carefully prepared positions.  One of those positions was our first stop, the Japanese Naval Underground Headquarters.

The Okinawa Convention and Visitor’s Bureau maintains the former headquarters as a monument to the tragedy of war and as an invitation to pray for world peace.  The underground headquarters site includes a museum, park and playground, ample parking, gift shop, snack shop, and a tower to admire the views of Naha and the East China Sea.

Construction of the underground headquarters began in 1944.  Japanese Navy engineers and laborers used picks and hoes to carve 450 meters of tunnels out of solid rock.  The headquarters was built six stories underground to withstand aerial and naval bombardment.

During the battle, 4,000 – 5,000 Japanese sailors under the command of Rear Admiral Ota Minoru moved from the nearby naval base and occupied the underground headquarters.  It was their last stand.

On 4 June 1945, the 6th Marine Division landed near Naha and began the assault on objectives in the Oruku Peninsula including the air base and underground headquarters.  Sailors under Ota’s command fought hard in engagements around the headquarters but were vastly outgunned by the Marines who could call on air power and the guns of the 5th Fleet to supplement their own tanks and artillery.

Admiral Ota reported that fighting from the headquarters ended at 23:30 on 11 June  1945.  He committed suicide with his staff and up to 2,400 of his troops before sunrise on 13 June.  Organized resistance on Okinawa ceased on 23 June 1945.

U. S. Marines sealed the entrances to the headquarters without clearing the tunnels.  The U. S. Army entered the site on August 27 to verify the deaths of Ota and his men and search for any survivors.  The site was resealed and remained that way until 1952 when the Japanese government recovered the remains.  The underground headquarters was largely undisturbed until 1970 when 300 meters of the complex were opened to the public.

Visitors reach the headquarters complex via the stairway the Japanese constructed in 1944.

It doesn’t look like there is enough space for 4,000 to 5,000 troops.  It is reported that room was so scarce, sailors slept while standing.

The height of the tunnels was surprising.  We could both walk down the center of the corridors without ducking or stooping.  Perhaps the size of certain equipment dictated tunnel dimensions.

Ota’s final message was written on the wall and is still visible: “Born as a man, nothing fulfills me more than to die under the banner of the Emperor.”

One room bears the scars of grenade fragments when sailors committed suicide. 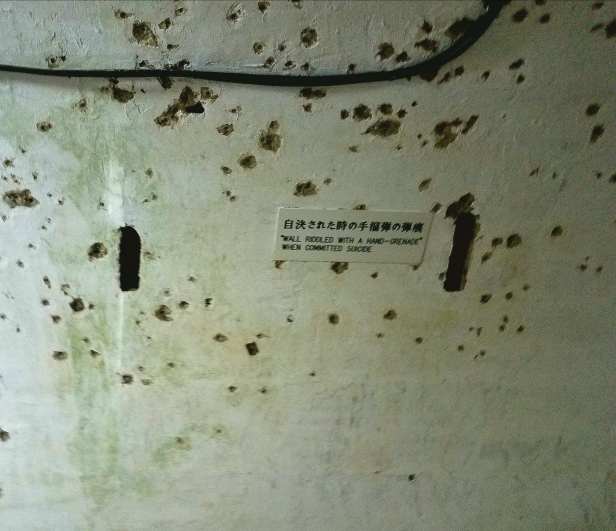 Not to equate the two situations, however strolling through the place where thousands died without hope brought back some of the uncomfortable feelings I experienced at the crematorium at Auschwitz.  Still, for those with an interest in history or WWII who travel to Okinawa, a visit to the Japanese Naval Underground Headquarters is a must.  A visit highlights the horrors of war and underscores the necessity of pursuing peace.