The food, amenities, and services of United Airlines’ Polaris lounges make them the best lounges of any U.S. airline.  In 2018, the Polaris Lounge at ORD was rated the best business-class lounge in the United States in SkyTrax Awards voting.  United has opened Polaris lounges at Newark (EWR), Houston (IAH), Los Angeles (LAX) and San Francisco (SFO).  I visited the Polaris lounge at ORD prior to a flight in first class on ANA to Tokyo Haneda (HND).

Other posts about this trip:

Access is limited to those flying United Polaris business class, or first class or business class on a Star Alliance airline on the day of travel to an “international” destination.  United defines international destination as Europe, Asia, Oceana (Australia, New Zealand and Tahiti), or South America (Chile, Argentina, Brazil and Peru).

No guests are permitted except passengers in first class on a Star Alliance airline can bring one.  Access is confined to the departure airport except Polari Business Class passengers can also enter at their arrival airport.

This lounge is more exclusive than the British Airways and Qantas first-class lounges at JFK and LAX, respectively.  Top level elites on Oneworld airlines can get into those lounges even when flying economy class.

The lucky few who qualify to enter have several options for seating.  The first seating area is to the right as you enter the lounge.  This area serves as a divider between the buffet and spa to the right and the bar, and restaurant and additional seating to the left.

There are two preferable seating areas located at the back of the lounge overlooking the ramp and on the other side of the restaurant.

A few of the seats in this part of the lounge use dividers to create a semi-private place for working of relaxing. 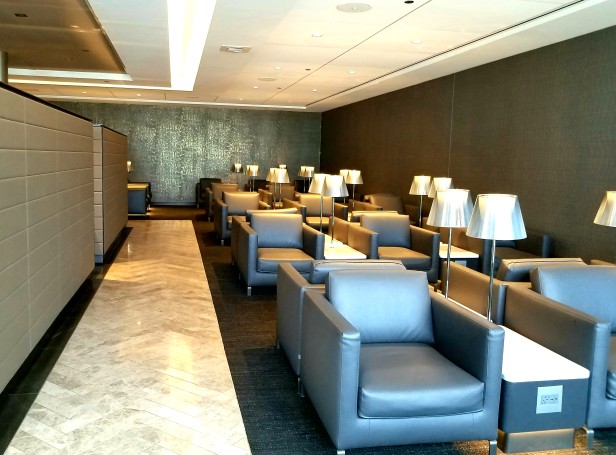 Overall, seating is comfortable although fairly ordinary.  For a brand-new lounge that is the best United has to offer, I think the seating could be better.

This lounge has a buffet and an a la carte restaurant.  I ate from the buffet for the convenience but took a look at the restaurant as well.

The buffet offers a wide range of dishes including soups, salads, hot and cold entrees and side dishes, sandwiches, snacks, fruit, and desserts.  The selection is far greater than the choices at an American Express Centurion Lounge and roughly comparable to the range of food items available in American Airlines Flagship Lounges.

Entrees and side dishes are displayed on a circular counter in the middle of the buffet area. 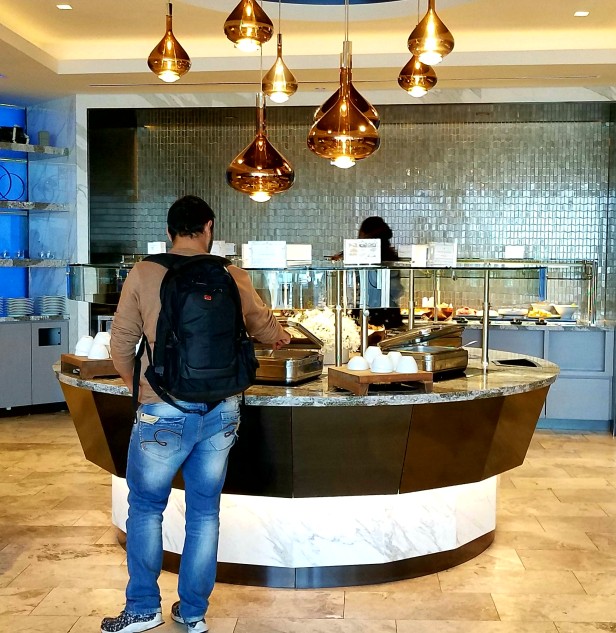 Guests can partake of a variety of premium beverages at the bar located just to the left of the first seating area.

The restaurant is located to the left of the bar.

Guests are asked to wait to be seated.  I waited for what seemed like five minutes for someone to seat me, but no one showed up.  Rather than seat myself and await service, I opted for the buffet.  Here is the a la carte menu:

It is great having an a la carte restaurant in a business-class lounge.  The selection of items is good.  Since I did not try the food, I can’t compare the quality to the wonderful restaurants in the Qantas First Class lounge at Sydney or Los Angeles.

The most interesting features of this lounge are the day rooms and shower suites.  United created a separate area for them next to the buffet.

Having day rooms for resting before a flight is much appreciated on a long layover.  Other airline lounges with day rooms that I’ve tried include the Qatar Al Mourjan lounge at Doha, Qatar (DOH), the Cathay Pacific Pier Lounge at Hong Kong (HKG),  and the Malaysian Airlines Golden Lounge in Kuala Lumpur (KUL).  Other than the Al Mourjan lounge, those are all first class lounges.

United will supply any amenities that might have been forgotten.

The most unique feature of the shower suites is the ability to have laundry steamed  while you shower.

The Polaris Lounge also offers a business center with computers, printer and copier, flight monitors, TV, and newspapers and magazines.  I found the WiFi more than adequate for handling email and surfing the internet.

This lounge lived up to the billing.  The food and beverages are outstanding.  The Quiet Suites are unique for an airline lounge in the United States.  Having your clothes steamed while showering is also a one-of-a kind service in my experience.  While it would nice to have seating options with additional privacy, I totally agree with the SkyTrax poll that voted the ORD Polaris Lounge the best business-class lounge in the U. S..  In fact, this lounge is on par with and in some ways better than the Qantas first-class lounge at LAX and the British Airways first-class lounge at JFK.